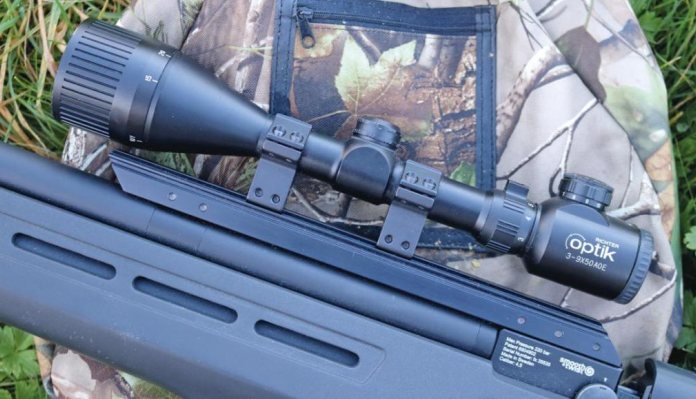 Before we had the plethora of ‘new era’ super scopes that supposedly help us shoot better, we learned our craft on basic but good quality optics. One such scope is the Richter Optik 3-9x50 AO-E model that I’ve used for many years and is one that even today definitely still earns its keep. For its time, like other similar airgun scopes with an AO and IR facility, many younger guns I’m sure would hardly believe that this type of optic was once considered to be fully featured. Here’s why.

Back in the day, if an optic had parallax adjustment then it was controlled via the front rotating objective lens housing. If it also had an illuminated reticle then the rheostat control was invariably on top of the eye-bell. Also, for reasons only known by the manufacturers, it had 11 brightness settings and the colour when ‘lit’ was always red! In that respect, the Richter here on test can be described as truly traditional.

Built around a 1” body tube, the scope measures just over 13” long and weighs 22oz. It features a 50mm adjustable objective lens (marked 10, 15, 20, 30, 50, 75, 100, 200 yards and Infinity), low profile ¼” MOA capped turret and boasts fully coated anti-reflective lenses. At the rear of the high strength aluminium casing is a smooth operating, deep outer ridged zoom ring, with a large, raised hub for ease of operation. While the substantial eye-bell features a fast focus ocular with the rheostat control sitting aloft, powered by a single CR2032 Lithium battery.

Based on the Mil

The scope’s second focal plane (SFP) Mil-Dot ‘based’ reticle only has 3-dots above and along both side stadia, while it does retain the more usual layout of four dots on the lower stadia. It’s useful for ranging using the bracketing method and for general purpose airgun hunting. The design gives enough alternative aim points should you need to aim off for wind or holdover/hold under at different ranges.

Spinning off the ridged turret cover caps reveals more old school leanings, as the adjusters themselves are a coin slot design. The windage turret gives 6.5 full rotations, the elevation 8, and both give 60 clicks per turn. In operation, they click around very positively and audibly to each station.

The nickname for them is ‘set and forget’ and on the Richter, that’s exactly what you can do. Once you set zero, those adjusters aren’t going to shift even on the harshest recoiling springer. In fact, it bears an antivibration resistant rating from the company and I’m in no doubt it deserves the term.

In an industry where technology has moved forward so fast, a particular model of scope has rarely lasted to stand the test of time as much as the Richter Optik 3-9x50 AO-E. Its bombproof construction is evident as mine has literally been through the mill, even to the extent of being heavily knocked on several occasions. Granted in places the anodising has scratched off, but lens clarity still impresses, the positive operation of turrets and both AO and zoom rings are still solid and sure.

It, without doubt, lives up to the claim of being shockproof and fog proof and from new comes with a 2-year guarantee, plus a pair of quality flip-up lens covers and battery.