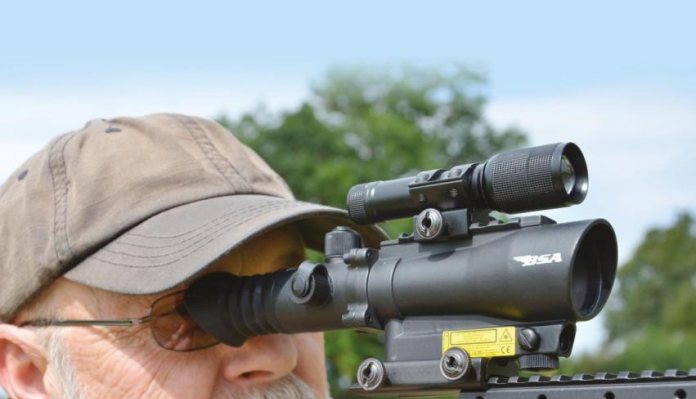 Think BSA, and we automatically think of their expansive range of airguns; yet this famous brand also market a host of accessories and equipment, all aimed at making life easier for the shooting enthusiast. Unsurprisingly, that includes a range of scopes and sights, and one such item in the list that had me intrigued, was what they term as the Tactical Weapon Red Dot with Laser sight.

The unit is sold as a complete kit; so, what’s in the box? The main body is the red dot portion of the sight, with the lower section an integral laser. A small section of Picatinny rail sits on the top, again all integral with the main body and clamped to this is a torch. The entire assembly is bolted to a 2.4”, one-piece, mount, that is designed to clamp to a Picatinny or Weaver-style rail. If this poses a problem, a multitude of shooting outlets now sell adaptor rails to convert from dovetail to Picatinny and vice versa. I used a Hawke adaptor rail, and fi tting the unit was a piece of cake, allowing me to clamp it to a BSA Scorpion for the duration.

The sight unit comes pretty well ready assembled, just needing the rubber eye piece shroud to be pushed into place at the rear. The idea here is to keep excessive back light out and accentuate the image, but if you don’t want to use it, then a simple alternative rubber rim (also supplied) can be pushed into place.

Batteries are required and come supplied. Firstly, the red dot derives power from a single, coin-type CR2032 battery. This is accessed by unscrewing the left side cap on the rheostat control turret. The torch runs on 2 x CR123A cells, and these are accessed via the screw-off, tail cap section of the body tube. This sight is all about versatility, but having now tested the unit in various conditions, I would recommend the use of the red dot system in daylight, and then using the laser in conjunction with the fl ashlight for lamping.

Zeroing the red dot system is done via the two small screw-cap turrets, and these have little rubber straps to presumably stop them getting lost. However, it’s impossible to unscrew them with them on, and once they have been disconnected, they become fairly surplus to requirements. Turrets offer ¼ MOA click values and require a small screwdriver. Adjustment was easy and fairly precise.

I must say, I do appreciate red dot sights, and this unit, whilst offering no magnifi cation at all, works brilliantly. The dot only shows in red incidentally, and I found that, despite coming with nine brightness levels, I only needed level 3 in daylight, which worked brilliantly. Plenty bright enough, yet with no glare, so eyes stay relaxed. Unlike a normal scope, there are no issues with parallax error, or even keeping the dot centralised in the tube; keep both eyes open, see the impact point and drop the dot on it and pull the trigger. I’m always amazed at just how accurate it is possible to be with these things. The Scorpion tore groups out to 30 yards coverable with a 5 pence piece, which I reckon is pretty good.

Moving to the night kit, the basic instruction leafl et saves just a ½” paragraph about the laser, and adjustment is fairly basic. I fathomed that with the dot zeroed, the plan would be to adjust the laser’s beam to coincide with it, and hope they overlapped when the gun was held fi rm, and each element was switched ON and OFF to compare. Obviously, this will change when you are closer or further away from your zero point, so it can also make a useful rangefi nding system.

To activate the laser, turn the rheostat dial on the left turret to ‘ON’ . This is the only control to worry about, as all the other settings on the drum relate to the Red Dot. Zeroing is fairly basic, with height set using the bottom wheel, and windage set using a small Allen key in the left side socket. It feels crude, but the end result was achieved. It’s stating the obvious, but the laser is no use on its own, and has to be used in conjunction with the lamp, so as to see the target!

The torch’s beam can be tightened and focussed, or widened, simply by rotating the head, in or out. In addition, as with many kits of this type, the sight-mounted ON/OFF button can be replaced with a remote cable with pressure switch (supplied), which can be stuck onto the gun’s stock that suits you. It fi ts by removing the rear cap/ON/ OFF and screwing in the cable assembly. Stick the pressure pad where you like it, and you’re ready for action. With 140 lumens of power, at the fl ick of a switch, it’s an impressive piece of kit, given its compact dimensions and, in conjunction with the set laser, usable out to around 30 yards in realistic scenarios.

At this range, the light thrown and the laser dot size itself, are usable, but the moment we opt to shoot at live quarry, the game changes. The acid test is at what range you can consistently produce groups of an inch, better less! And in live hunting scenarios, when the heart is racing, and adrenalin is pumping, this marker may not be so easy to achieve. Practise as always, is the key, but be guided by results achieved. Having multi-use built into this sight is quite appealing, and whilst I would regularly use the red dot option, which really impressed, just knowing that the lamping set up is ready and waiting, is reassuring. The unit has a robust feel to it and gets all the usual water and shockproof guarantees too; so, if you want to inject a fresh feel to your shooting, a radical new sight set-up such as this could well be the answer.