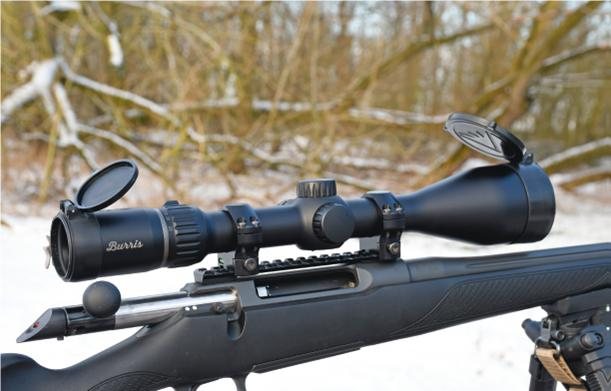 The latest Four Xe range from Burris contains scopes suitable for hunting, with second focal plane optical/mechanics and a 4x zoom range. Options include a 1-4, 2.5-10, 3-12 and 6-24, the latter in both 50 and 56mm (on test) objective lens sizes, covering most requirements. But as always, the specification demons are in the detail.

The large objective lens maintains a bright image for a 24x magnification scope at this price point. This one, at 383mm long with a onepiece 30mm main body tube, offers plentiful space to optimise mounting position for the 88mm of eye relief. This is not as much as some ‘magnum’ capable optics advertising 100mm, but in reality, that’s often too long for smaller rifles.

Windage and elevation are adjusted for zeroing with capped dials above and to the right of the spherical saddle. They provide 1cm@100m clicks and after setup, allow removal and re-alignment to mark zero if you do intend to make dialled adjustments at a later time. All clicks are fingertip perceptible but fall into the ‘zero and leave alone’ category, in my opinion, it’s not a repeat dialler. There are 60 clicks per turn with minimal overrun.

The left-hand side, backlashfree parallax dial adjusts as close as 20m, making it suitable for airguns and rimfires. Also, the price point allows this scope to compete strongly with commonly seen brands in the airgun domain. Adjustment is smooth and there are no distance markings, but they are usually only a suggestion anyway. Rotation snaps the image into well-perceived focus, especially noticeable as magnification increases.

The outer cap end of the dial sports the illumination control with 11 intensity settings, each slotting into position with firm detents and intervening off positions. I like these, as they allow it to be clicked on and off without the constant need to reassure yourself of preferred brightness. The usual CR2032 Battery resides under a lightly knurled cap. Only the centre floating cross of the reticle lights up, but I liked it.

The major 3,6 and 9 o’clock arms of the second focal plane (SFP) reticle remain constant in size throughout the magnification range. There are three windage markers on each wing as well as three holdover hash marks for longer range shots.

The instruction manual lists reticle subtensions in minutes of angle (MOA) on a scope with MRAD/cm clicks, which immediately seems a bit odd.

Although in the second focal plane with constant reticle size, these are somewhat unclear without a specific magnification setting advised anyway, so you are on your own for learning what and where will give you the suggested 100–400 yard holdovers. Sadly, I just see marketing going head-to-head against technical information at this point.

For decades the Mil-Dot system was confusingly fitted to scopes with MOA adjustment dials, and here, in a world that has woken up to one or the other, Burris has now reversed the mixed units. For someone who understands these factors, it is just a hassle, but for someone new, a confusing start. Frankly, I just see it as an alarm bell for manufacturers not really sure of themselves. An ‘SCR’ MIL reticle is also available and this would make more sense with metric clicks on the adjustment dials.

Overall adjustment is listed as 25 MOA in the instructions, yet I counted 17.7mRad/177 clicks - just under three complete rotations - which converts to 60 MOA, so doesn’t compute.

It all just seems a muddle, so ignore the 25 MOA, I don’t know where that comes from?

The scope offers a bright crisp image with sharply contrasting, well defined mid-weight reticle and easily focussed rear eyebell. Magnification similarly adjusts with a rotating collar that transmits no tactile feel for internal motion, with defined stops at either end of the travel. There is no feeling of motion or noise from the inner lens packages transiting helically back and forth, a great sign of attention to manufacturing precision.

Eye relief is constant throughout the zoom range. I found the scope perfectly usable as a ‘zero and leave alone’ optic on both .308 and .223 rifles, where the higher magnification levels available made for a good daytime image and precise aiming.

The reticle is well-weighted, neither feeling too bulky or fine through varied target backgrounds or in more colour rich hunting environments with less specific colour contrast. I particularly liked the minimalist centre illuminated cross which lacked unnecessary frills that will never be used on a second focal plane scope.

The exit pupil was circular, without difficult vignettes and a crisp black edge showing no tunnelling at low magnification. The focus was flat across the field of view and when wound down lower into the 6-8x magnification region, made for a versatile hunting scope with longer range varminting capability, once the holdovers are learned. Given the common use of rangefinders and ballistic apps these days, the holdover reticle has lost its way a little and in fairness, when learned and with magnification adjusted correctly through experimentation, is fast to use.

Flip-up lens caps are supplied and the hard anodised finish is sleek, matt black and perhaps a quality level above similarly priced competitors. All the threads are smooth and the machined knurling for grip is all neatly executed.

The scope shows a crisp picture and reliable function but a confused specification, with limited dialling potential common to other high magnification scopes that might appeal to long range shooters or varminters. If you understand the specification detail contrast, the scope is optically quite good at the price but for a new entrant to longer range adjustments, not the clearest starting point mechanically.