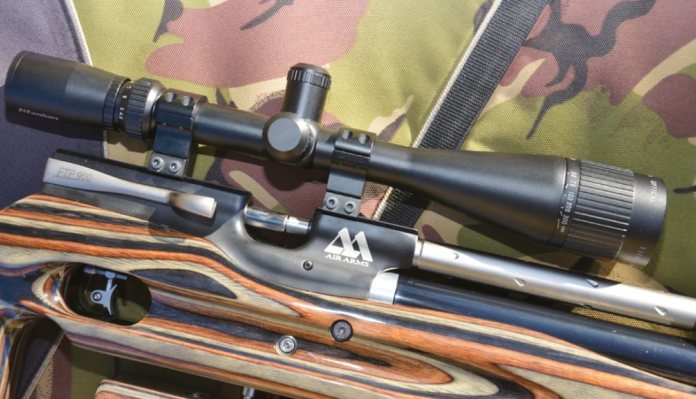 Look at today’s rifle scope market, and what you can get for your money really is quite astonishing. We take much of it for granted, but even on many fairly basic budget models, the features included and quality overall, far exceed what you would expect, for such a small outlay. Of course, manufacture in the Far East, with cheap labour costs, has played a big part, but the bar overall, has been well and truly raised over the last few decades.

Opt to pay a bit more though, and quality will normally shine through, where optics are concerned; on test here is a classy offering, from what seems like a relatively new name on the scene. Delta Optical apparently have their headquarters in Poland, but there hardware is precision engineered by the Light Optical factory in Japan. If the elongated and rather sleek profile of this model looks familiar, that’s because it is based on the Lightstream model of the same specification, originated by the late Alan Konyn. Lightstreams were produced at the same factory and had an excellent reputation for upmarket glassware. So, this Delta Optical Titanium 4.5-14x44 FFP HFT AO has had a good start in life.

So, what comes in the box? Well, not a lot when compared to the all-in bargains that we have come to expect. But we are talking class glass here, and the traditional elasticated lens covers is all you can expect- along with a rather general and not overly informative manual.

A big feature of this Delta, and the original Lightstreams, for that matter, is the First Focal Plane (FFP) aspect. This means that the reticle is mounted at the front of the erector tube, with the result that, as the variable magnification is increased, the reticle size and spacings increase correspondingly, thus maintaining the same proportion relative to the target on each power setting. This may not be of great importance to some shooters, but it will really appeal to others, who want their settings and aim points to remain constant, irrespective of how the scope is adjusted. If there is a downside then it’s that in your view everything appears to get bigger, with a smaller field of view (FOV). So, at maximum magnification, the reticle will appear thicker and the target larger, with the reverse being true at low mag.

HFT in the name relates to the HFT (Hunter Field Target) reticle, and here we get a very comprehensive design. What I really like, is the bold outer thick posts and one at the top, whilst the lower post is spread further, to allow for more range drop markers. Thick outer posts help to avoid losing the sight picture when aiming high into trees for example. The design overall is quite ‘busy’, with the expanding Christmas Tree and additional windage dots and, as this is being billed as an airgun scope, the reality is that for most legal limit work, only the first three lines down will be utilised, probably just two for HFT. The free floating central cross is a nice feature, maintaining a nice clear aim point. Each line down represents a Mil value, and the markings in between are half Mil, so the proportions are about perfect.

Turrets are rather similar to Leupold, in that they are a tall, target- style, and both have screw caps for protection. The finger-friendly design means no screwdriver or coin is needed to rotate them. Whilst they are tall, they are quite slim, as they use an objectivemounted parallax as opposed to one the saddle. Turret rotations seemed a bit frugal at just three turns, but click values are 1/10Mil, (.36” @100yds) so this evens out the range of adjustment against that of a 1/4MOA system. Everything behaved itself well on test too, and despite fitting this model using fairly high mounts, with pre mid set turrets, the zero came straight in on the button; in almost three shots! I like to pride myself on a fast zero technique, having mis-spent most of my life in this area, but this slick Delta Titanium couldn’t fail to impress. The turret clicks are among the most positive (correct amount of stiff resistance) I have ever encountered, and the build quality overall is just very reassuring.

Delta’s HD/ED Japanese glass system is incorporated into these scopes, and this is a big contributory factor in the impressive low-light performance on offer. Clarity, resolution and sharpness of image, are all spot-on, and with again, the correct amount of resistance in both parallax collar and the rear mag selector, a superior air prevails. Head position is quite critical when mounting this scope, but that’s a good thing, since it promotes a consistent eye scope relationship, and should help to minimise parallax error.

Speaking of parallax, when viewing a target set at an actual distance of 26 yards, the Delta focussed in at 22 yards. Yet different eyesight can inevitably lead to different readings in this area, and many scopes that I test give me different results to those factory stamped. So, this in itself isn’t a fault. Shooters will just add their own guide figures if required, but on an HFT model such as this, where you can’t keep adjusting the focus in a match, a full range distance guide is less important in any case. Minimum focus is marked as 15 yards although will go slightly lower, with the follow on markings, 20, 30, 50, 77, 100, 200, 300 yards, and ∞ officially marked up. With the parallax dial set to around 24 yards, and magnification on 10x, HFT target ranges were then viewed, and I would be more than happy navigating a competition course with this set-up.

This is an impressive performer, with great glass, and superior build quality, and with that highly useful reticle, it’s difficult to fault what’s on offer. Bear in mind that all Delta products released in the UK apparently get a 10 year guarantee, a statement of the company’s confidence in their products if ever I saw one, so this Delta Titanium has to be a sound investment for sure.