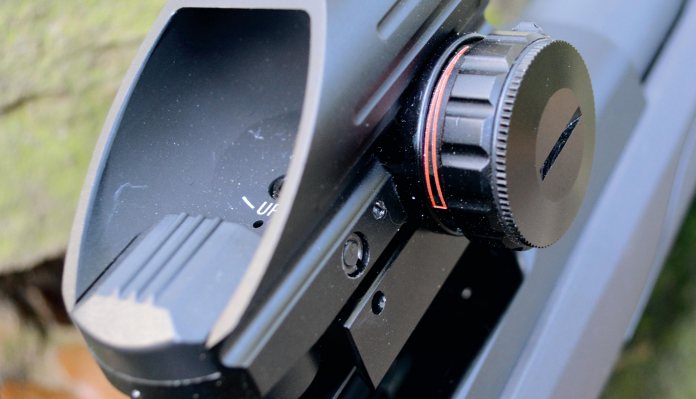 Endless use of magnified optics may have allowed and encouraged the pursuit of ultimate accuracy from rifles, but what it sometimes feels to have stolen in trade is some of the illicit fun of just shooting. The Aim Sports Reflex sight is an inexpensive route to this guilty pleasure but does have more serious roles too.

RIGHT BACK AT YA’

Reflex sights allow virtually limitless eye relief and a 1x magnification, means both eyes open to improve both target acquisition and in some cases, assess the speed of moving targets for the necessary lead to be applied for a hit. They turn a rifle into something more intuitive and similar to a shotgun where the ethos becomes point and shoot, looking at the target rather than ‘aiming’. Standing just 49mm above your Weaver or Picatinny rail’s surface, the 33 x 23mm reflector allows the red dot from the LED to project rearward toward your eye and in this case, 4 reticle options are available from a simple dot or cross to more complex choices. A rotary rheostat on the right hand side offer red or green colour options and variable intensity. A switch to the rear underside selects reticule choice. There isn’t an auto-off so remember to shut it down to preserve the CR2032 battery!

The dot is effectively positioned centre-screen so will appear to float approximately 30mm from the top surface of you mount. The screen’s surround is only a couple of mm thick so becomes virtually unnoticeable in your relaxed ‘both-eyes-open’ stance. I prefer a fairly upright head position allowing maximum visibility and spacial awareness.

I initially mounted the reflex on a Ruger 10-22 for some fast fire plate shooting where the simple bang and clang notifies a successful hit. Zeroing is accomplished with an Allen key (provided) that controls adjusters on top and to the left side where one click moves the point of impact 1” @ 100 yards or ½” @ 50 yards for example. I found this matched the application and more importantly reticule subtension just perfectly; this isn’t a precision shooting tool like a scope after all.

More fun was had shooting moving targets on a Merkel Helix .308, with an ultra-fast straight pull action to engage balloons allowed to drift along a small valley in the wind at 50 yards. Totally addictive and great practice for gun mounting and the uncommon aspect of ‘leading’ targets with a rifle rather than shotgun. I chose the simplest single red dot for most activities and found the unit simple to set up and perhaps more importantly, swap back and forth while retaining zero on a Picatinny rail. Raindrops can accumulate on the surfaces though so keep it covered as much as possible in the rain!