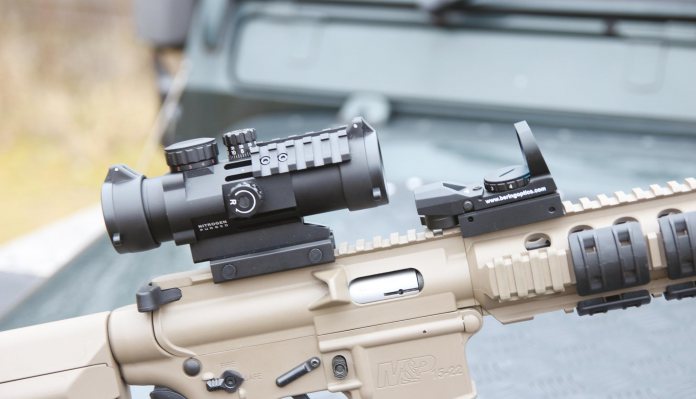 When I started shooting Practical Rifle in the 1980s, the first scope I bought for my Colt AR15 was the original, dedicated Hakko-made 3x20 with BDC (bullet drop compensation) elevation turret cut for 100 to 600m. Set up for the original 55-grain M193 ball load producing 3200 fps. This compact design proved its worth, as all you had to do was dial in the range and aim dead on. OK, the spec wasn’t powerful but it worked well on Fig 11 and 12 targets and gave me an appreciation of what a compact optic could offer in the more action-orientated disciplines.

Fellow shooter and my advertising guy on Shooting Sports, Ed Jackson, said he’d been speaking to Rifleworks who were going to send down a couple of scopes from a company called Bering Optics for me to look at. True to their word, a package arrived containing the Prismatic Supra 3x32 compact riflescope and the Sensor Reflex red dot. First up, the Supra.

Though larger than my old Colt/Hakko 3x20, it follows the same principle and is still nice and compact at 5.75” long and 3” high weighing 16.1oz, just perfect for bolting onto a 22 rimfire semi-auto or 223 Rem AR15! Mounting is by a standard Weaver MIL-STD-1913, one-piece base with twin securing nuts for a flat-top receiver. The scope can be removed from the base clamp and will slot into the gutter on the rear carry handle/D-handle and has a see-through hole so that you can still use the AR’s iron sights. Bering includes Allen keys to allow striping the base out and a thumb wheel for carry handle attachment.

The reticle is a jack of all trades concept, with a wide outer circle with short subtending stadia at 12, 3, 6 and 9 o’clock on the periphery with a three dots of decreasing size on the 6 o’clock axis measuring 2/3rd, 1/3rd, and ¼ Mil @ 100m, which in theory and given the ammunition used, probably SS109 62-grain gives ranges/aim points of 100, 274 and 366m, the tip of the stadia is 457 and the intersection 550m. This is dependent on what your ammo is doing, for me using a 69-grain load at 2700 fps they would be different, but it’s only a matter of shooting the distances and seeing what matches up.

I see them more as close/mid range aim points for fast reaction use. As the turrets are dialable, exact drops can be easily wound in. Click values are ½ MOA @ 100-yards and you get 40-clicks per rotation and just under six full turns in both planes. Turrets are marked from 0-18 in 2 MOA divisions, sub-divided into ½ MOAs. Though uncapped, the compact turrets are positive and firm in operation, with audible clicks and small enough not to be accidently moved.

The eyepiece shows a fast focus bell and front and rear flip-up lens caps are included. The rheostat sits at 12 o’clock and offers red and green illumination with five levels in each, powered by a 3V CR2032 coin-type battery. This can be switched off and you get the plain black reticle, so you can still function without power. A final feature are two Picatinny rails at 10 and 2 o’clock forward of the turrets for lights, lasers or even a red dot for fast and close if you favour that sort of thing!

The reticle looks good for CQB-style shooting, though the 1/3rd and ¼ Mil-Dots are tiny and at 100m almost impossible to see even when illuminated. However, the optics proved clear and the general image was sharp and easy to use though the reticule was hard to focus exactly and better when lit! Given the relatively flat trajectory of the generic 223 Rem load I found the centre 2/3rd Mil dot faster and easier to place by using simple hold over on Fig11-type targets.

Instantly familiar, as the design has been around for many years and I believe originally built by ADCO and copied by many, is Bering’s version the Sensor Reflex red dot. This open, L-shaped build shows a vertical projection screen at the front with the image projected from the rear. Super light and compact at 3.23x1.42x2.09” it weights just 3.7oz. The rheostat drum sits in the middle and offers five levels of illumination plus an (NV) setting and a brightness adjuster (A) that by two sensors at the front automatically adjusts the illumination given the ambient lighting conditions.

Mounting is by a Weaver/Picatinny base and adjustment by Allen-headed grub screws, keys included for fitting and adjustment. A rubber lens protector is provided when not in use. Unlike many red dots, which offer just a single aiming point, the Sensor offers multiple reticles with four options; 2 and 3 MOA dots, a 45 MOA cross hair and a 45 MOA T-type reticles. These are selected by a rotary switch at the rear. Power is by the standard 3V CR2032 coin-type battery.

All reticle options are crisp and clear but on my example the 45 MOA cross and T-type were not upright, which I found distracting. However, the two dots were more than adequate for the practical distances a red dot is used for, of up to 100-yards ish. With this sort of sighting system, I feel simpler is better, hence my preference for plain dots and at the price you can’t go wrong!