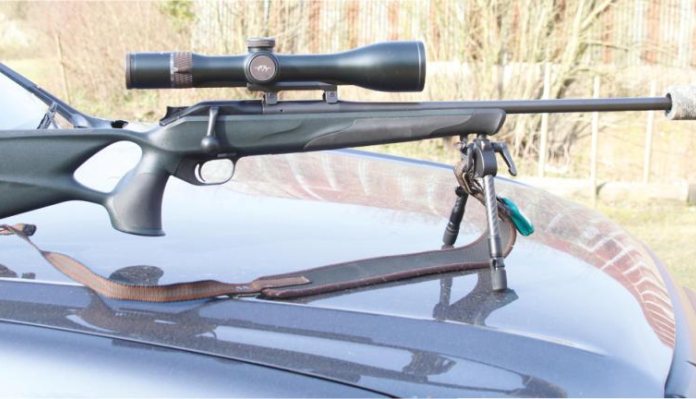 I think it was 2017 when I saw some Blaser-branded binoculars at the BSS; hello I thought, what’s all that about? As it happened, they were not a branded product but designed and made to their specifications; and I naturally concluded that rifle scopes would be next, which, unsurprisingly proved to be the case, From a highly successful company like Blaser, who obviously know a lot about marketing their brand and never seem to miss a trick, an in-house scope would make a lot of sense and, for rifle owners, to become a ‘must have’ item.

My thoughts were confirmed later and, in 2018, I was invited by Blaser to Germany for a range day and night to put the new scopes through their paces. Control-wise, as we shall see they are a tiny bit different, but in terms of quality and ability, right up there with the other top German and Austrian makes, which is an accolade in itself.

There are three models, all with 34mm body tubes and in the 1st focal plane (FFP) that use the IC (illumination control) first seen with Blaser’s collaboration with Zeiss a few years ago. Here, as you ready the rifle, a magnetic switch in the de-cocker activates the illuminated reticle. Options are a 1-7x28 (driven game), 2.5-20x50 (mountain hunter) and 4-20 x 58 (twilight specialist), the last two higher spec models also offer QDC (quick distance control) which is their name for a ballistic drop compensation (BDC) turret. On test, is the 4-20x58IC.

Visually, Blaser has not skimped on the design and curb appeal, as they really are good looking. I don’t usual get too excited over visuals, certainly on optics, but make an exception here. The colour is a bronze green that in certain lights turns brown. When mounted on my R8, they look less like scope and rifle and more a single, homogeouns unit. All controls (mag ring, parallax, illumination, QDC and windage turrets) have cross-hatched, contrasting, brown rubber gripping surfaces. Again, visually pleasing and practical.

The 4-20x58 is not that small at 31.22 oz and 14.37” long; so, about the same length as my Swarovski Z6i 2.5-15x56, but heavier, due no doubt to its 34mm body tube and extra glass. But for a 20x mag design not as big and heavy as might be expected; equally, the QDC turret is surprisingly low profile. Controls are a bit back to front, with windage on the left of the saddle and on the right a combined parallax and illumination control. The mag ring offers a lot to get hold of and is nicely tactile in operation. Optical quality is superb, showing true and crisp colours, even in lower light. On that point, light transmission is 92% (daytime) and 90% (night) and gave my old eyes a bit of an advantage as the evenings drew in.

Turrets offer 1cm clicks @ 100m and Blaser provides a zeroing/adjustment tool. You get 88-clicks per rotation and 1.75-turns in elevation and 1.25 in windage. This did not seem much, but I had no problems with lack of correction movement, even on the loopy trajectory of an R8 Silence in 308 Win with heavy bullets and a 243 Win in a 22” tube.

Windage is under a removable cap and is a ‘set and forget’ type. Elevation (after zeroing) offers just under one turn of movement with a zero stop position, I’ll deal with this first. Unscrew the cover cap on the turret and, with the tool, remove the central Allen screw and then the locking plate to expose the drum. This is turned to set zero and when complete, re-position it so the 0 mark is on the fixed reference point on the saddle, it can only go on one way as the zero stop pin has to enters a hole in the base. If you need more movement, removing the two, Allen-headed grub screws that hold it to the elevation shaft allows it to be re-positioned, so you can carry on. In essence, the scope offers two zero points, the first (base zero) is recommended for 100m, then lift the drum to unlock and move it to the first white dot (4-clciks) and push down to relock.

As can be seen, the ability to quickly set a second zero point has its uses, as you can work up and down from there in terms of applying drop, obviously different calibres/ loads will produce different results. You of course can just rely on dialling in, which is accurate, as I have proved out to 400m in Germany. Here, you lift the turret up and wind the corrections in, however you cannot then re-lock it, as you can at the zero and +4cms positions.

Confusing, at first, is the juxtaposition of the windage and parallax/illumination turrets, I assume it was done to make operation of these two controls easier for right handers in the shoulder. Maybe so, but after experimentation, I prefer the conventional layout that just about every other manufacturer uses. Parallax is on the inside and set at 100m and is clicked up through I, II, III and IIII positions. Illumination is pulled out to turn ON and offers seamless operation to adjust the dot’s brightness. The reticle is a simple #4-type, with just the centre illuminated. I like FFP scopes, but some tend to have something too fine at minimum mag to be usable and equally so big at maximum that it looks like a 4” fence post. My Schmidt & Bender 3-12x42 Klassik is sadly like that. Blaser is to be congratulated, as they offer a reasonably well balanced design; yes, it’s tad slim at 4x, but useable without illumination and at 20x still slim enough for precision and clarity.

Unlike major optical companies that make scopes for all rifles, Blaser’s approach is currently dedicated to their QD base with European rail only, as there are no round bodied models. This does cut the field of interest down to Blaser owners only, which is obviously how they want it to be! But I’m sure a round-bodied option, using standard 34mm rings, would attract some attention, from those who might see it as an interesting alternative to Zeiss, Swarovski etc? We shall see but keeping it all in house does make for a very special optic, which will doubtless appeal to Blaser rifle owners; sort of like an exclusive club!

The IC (illumination control) is not new to Blaser rifles, as they hooked up with Zeiss some time ago to produce something, well before they started making their own scopes. The idea sees the de-cocking catch with a magnetic switch that, as it’s pushed up and stops near the underside of the scope, activates the illumination. I suppose it prolongs battery life, but I would not choose it. However, if it floats your boat, then it can be retro-fitted to existing (non-IC) rifles.

You might think a magnification of 20x is a bit OTT for a hunting scope and I’d tend to agree, but it’s great for observation, and that occasional, supported longer shot and a good bet for varminting at longer ranges. Plus, that big 58mm objective lets a lot of light inside and, as I said, clarity, image quality, low light ability and colour rendition is exceptional. And don’t start on about pointing a loaded rifle at an animal just to look at it, as A – Blaser rifles can be de-cocked and re-cocked instantly, and B - if you’re fingers not on the trigger and your brain engaged; no problem.

Mounting is only by a Blaser-dedicated QD base with a Zeiss-type European rail. It’s a strong and secure system and can be adjusted for eye relief by slackening off the mounting screws and moving the scope backwards or forwards to suit. Overall, a great product from Baser and a bold move from a rifle producer too.