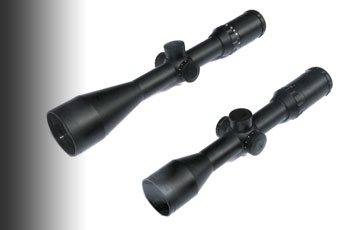 At a time when the scope market is seemingly saturated with models offering all manner of features this pair from BSA’s Jaguar range - do seem a little bland. However, though termed ‘new’ are only new in relation to the UK as BSA Optics, based in the USA didn’t feel our market would have any great need for them; for reasons best known to themselves.

However, despite the lack of ‘bling’ associated with certain other ‘must have’ scopes there’s actually quite a lot to like. After using them, I discovered they not only paired up well with the rifles I ‘plonked’ them on, but also showed their down to earth practical appeal. First up I’ll detail what both scopes have in common in terms of features and then give my opinion where one scores over the other.

The 1.5 – 6 X 44IR is the one that’s appealed to me more for airgun use, but then again as they’re not primarily airgun scopes (not parallaxed for the usual 55-yd) with a spec like this you don’t need much parallax adjustment for the range the 12ft/lb air rifle is suited to. Then again, if you like your rimfire or fullbore rifle glass to be simple and efficient, the 3 – 12 X 56IR more than shows its worth so it really is a case of horses for courses.

Besides the two-piece, 30mm body tubes and practical, matte black finish, both models have a quality feel and look about them. The magnification ring and fast-focus eyepiece offer practical and easy operation, and a no-nonsense saddle arrangement shows profile turret adjusters hidden under relatively high and chunky caps. The reticule is glass-etched and uses a Mil-Dot design in the 1st focal plane. The ret uses the second pattern with four, round dots per arm with thicker outer stadia.

Though using 30mm tubes, the scopes are sensibly sized and show a squat, business like appearance. The fully multi-coated lenses offer a high light transmission resulting in a clear view to the very edges of the sight picture even in very low light conditions.

Illuminated as you might expect, the rheostat strikes a good balance between sensitivity and brightness; even on full power it does not flare out, so allowing you to use the Mil-Dot as a multiple aim point system, which is what we airgunners tend to do. As you’d expect it takes a CR2032 3V Lithium battery that fits into the housing.

Turrets are finger-adjustable with click values of ¼” @ 100 yards. Both models offer 60-clicks per turn and offer solid and audible movement, however the amount of adjustment varies considerably from model to model! The 1.5-6 has eight full turns on the windage and seven elevation, whereas the 3-12 gives six only for both planes.

Now unless you’ve ignored the specifications of these two you’ll realise they’re quite specialised, particularly the 1.5-6 due to it having a relatively large 44mm objective lens. That’s one of the reasons I’ve refrained from using the term ‘compact.’ This low magnification coupled with the larger objective officers a very wide-angle of view with a high level of light transmission. In ‘real time’ usage that relates to a scope that’s suited for use at relatively close range and particularly in low light conditions. Equally so if you prefer to have the higher magnification ability of the 3-12, this gives you an even larger than usual objective, therefore affording a better level of light transmission even on its higher settings.

Choosing one of these will be dictated by the type/style of hunting you favour and maybe even rifle/calibre choice too. In relation to that; the 1.5 – 6 X 44IR surprised me as to just how useful it is for certain types of air rifle hunting. As for the 3 – 12 X 56IR then unless you manually re-parallax it by adjusting the front lens, I mostly favoured this model for the times I had it on a .22LR rimfire. For lamping rabbits it was great and I’m sure for the price many fox shooters won’t be disappointed with its performance on a .22 centrefire.

In my opinion much of what I’ve said about these two comes down to the same thing; how no-frills and practical they are. In terms of performance they offer a lot for the price and have similar performance to scopes costing three times more. Granted, they might not offer all the latest gimmicks and features found on many other makes, but they don’t offer less in optical performance either. In truth that is what it’s all about for a hunting optic – good glass, good performance, well built and a sensible reticule.

I’m sure this basic, yet good recipe is going to have the more savvy hunters looking at these two a lot closer…