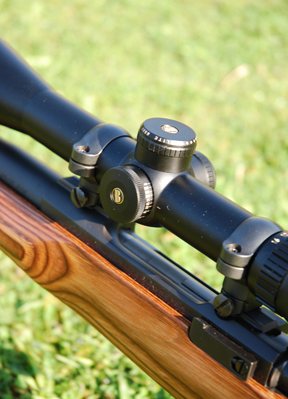 Bushnell has a good reputation for optics from laser rangefinders/scopes, binoculars too, and of course telescopic sights. Many might feel that their scopes are in the cheaper/basic bracket, which is certainly not the case. I have here what might be considered the top of the line range with the Elite 6500 series in what I reckon is a versatile and generous magnification.

The spec of 2.5-16x42 offers quite some magnification range with a 6.5 zoom ability, much like the Swarovski Z6i series that started the whole thing a few years ago. This allows a scope to be built that can dial down to a relatively low power for close work or driven game then be dialled up to maximum setting for longer range use. For example my Z6i is a 2-12x50 and it truly offers a highly versatile optic than can do a number of jobs well. However, the magnification range of this Bushnell offers a similar ability but at near a third of the cost. So I was keen to see how it does the job!

Made in Japan, as are most modern optics, the scope shows a good build, with its 30mm, one-piece body tube. The finish is a pleasing semi-matt black and it has that nice, understated look that to me always feels like quality. So let’s see what we’ve got here!

The 2.5-16 is reasonably long at 13.5” though not that heavy at 17oz and it comes with a 3” sun shade as standard. Guaranteed 100% water/fog proof, the optics are fully multi-coated and all exterior glass has Bushnell’s Rainguard® coatings. This hydrophobic (water-repellent) lens coating prevents fogging by causing condensation from rain, sleet, snow and breath to bead up into much smaller droplets. This effect scatters less light which results in a clearer, brighter view.

The build offers a second focal plane, Mil-Dot (2nd version) reticule and fast-focus eyepiece with a heavily ridged magnification ring. Numbers are marked in gold apart from the X10 position, which is red, which is the power you have to Mil the target at to get the correct subtensions. This setting differs depending on what model of Elite 6500 you have, for example the 6-24x50 version use X12 for this job.

On the left of the saddle is a focus/parallax drum marked from 10 to 300 yards and ∞. Turrets are capped, target-types that offer a lift/unlock function. Here you can adjust them, then pull up the drum, which disengages from the turret so it can be set to zero; clever, but on capped turrets not that useful…

Click values are ¼ MOA @ 100 yards, with the drums divided into 12 sections each sub-divided into four, giving 12 MOA per rotation with seven (plus some change) full turns available giving a total movement at 100 yards of 84 MOA/”. This applies to both windage and elevation.

Turrets are smooth and easy to dial, with audible clicks and enough resistance to allow you to feel individual movement. The fixed section shows a fine vertical line, which acts as a register for dialling in a known setting, however if the drum is near the base of the turret this is very hard to see. A white triangle on the saddle to line up on would have been a better idea. Also there are no horizontal lines, which are useful to give you an idea of where you are in terms of adjusting for different ranges.

The Mil-Dot is the standard, four dots per line system with the second, round pattern dot and not rugby ball shape of the first, which I think is visually better. The field of view is good with a figure of 41 feet @ 100 yards at X2.5, which drops to 6.5 feet at the same distance at X16. Until you’ve tried what I term a wide zoom range scope, it’s hard to believe how versatile it is, as you can be out on the plain at X14-16 for that really long shot, then swing into the woods and wind it down to X2.5 for standing unsupported on moving game with a decent field of view too. This will naturally apply to target shooting too, giving the luxury of a low mag for close range and freehand work, but with a usefully high top end when you really need to nail the group in tight… The fact the Elite 6500 can go right up to X16 does really give it an extra dimension, or simply a hi-mag, mid-sized, varmint-type optic too.

The Elite was tested on my 25-06, Ruger M77 Hawkeye and here the smaller 42mm objective was most welcome, as it allowed me to keep the scope down nearer the bore line. Dusk and dawn light gathering ability might suffer a little when compared to a 50mm objective, but it does well enough. Performance-wise the 2.5-16x42 is quite some versatile optic, OK you may as a deer hunter never need the maximum magnification, but if you do it’s there and generous too. Likewise you can go down to minimum mag for close range use.

Priced at £670, it’s considerably cheaper than the Swarovski so offers this wide zoom range in a more affordable package, which will certainly appeal to many rifle shooters… Likewise it’s around £100 cheaper than a comparable Leupold too.

I also tried the Rainguard coating with a bit of judicious steam from a boiled kettle and it does work, which is a most useful feature for any shooter

We reckon:
• European-type technology at a fraction of the cost
• Versatile magnification range
• Practical all-round optic