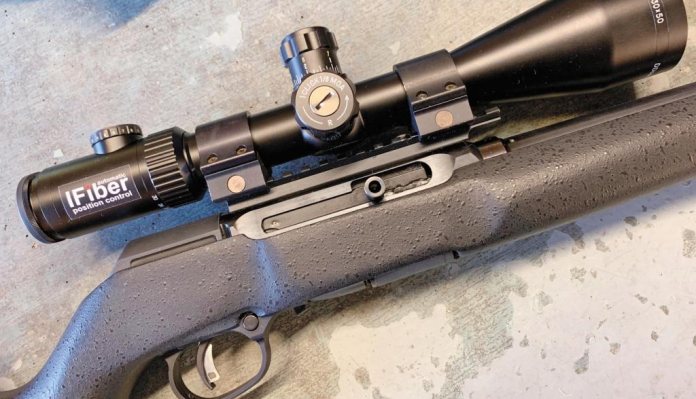 Readers may recall the round robin look I took at the new range of scopes, binoculars, red dots, night vision and thermals I did last month from DDOptics. This German company are brand new to the UK and distributed and imported by RUAG Ammotec UK Ltd. I packed off the NV and thermals to our resident expert Bruce Potts, as they are not my speciality; so, I get to test the optics and I’m starting off at the top end, so to speak, with their Nightfall Gen III Tactical 5-30x50.

In terms of spec, it’s the biggest model they produce, with 5-30x mag offering a six times zoom range; although it’s also offered with more standard turrets for hunting, but in Tactical mode, as you might surmise, it has the typical, tall, external dialling drums and also offers a rather simple, yet practical zero stop function. Always useful and more common these days, it means that if you get lost in elevation, as can happen on scopes of this type, you can wind it back to a fixed and known zero point and quickly start again.

The build looks competent and is reasonably traditional; the one-piece, 30mm body tube having thick, 2mm walls. The finish is a pleasing, semi-matte black with fine but bold markings in white and yellow. The fast-focus eyepiece bell shows the rheostat on top at 12 O’clock that also houses the coin-type battery. Although marked OFF and then from 1 – 11, illumination is seamless and is in two sections 1-4 is for night work and 5 – 11 upwards for daytime. The magnification ring is metal and slotted for grip with a raised dialling fin and is very firm in operation and a tad hard on the fingers. However, the full range throw is easy to accomplish, as you can go from 5 to 30x in 180⁰. The saddle has the parallax drum on the left and is marked from 30 to 500m in various increments and then to ∞.

Turrets are tall as you might expect and harking back to my traditional comment; look like the sort of thing you’d see on a Leupold or similar quality longer range scope in the late 1990s. The rims are heavily slotted for grip and there’s a lot to get hold of, although edges are a little sharp. Movement is pleasingly firm with good audible and tactile clicks that are easily counted. On top, is a large, slot head screw that allows you to set the drums to zero. The only difference between elevation and windage, apart from the markings, is that the former has a zero-stop function. This is a basic and practical design and consists of a lockable, threaded collar that sits below the drum. Wind it down to its lowest position and zero in the normal manner, once sorted spin the collar up until it touches the base of the drum and then using the tiny screwdriver provided, pinch it shut and, hey presto, zero stop!

Click values on this model are 1/8th MOA with 48-clicks per turn sub-divided into six main sections, divided again into fours. Elevation offers 9.5 rotations = 57” top to bottom and windage eight = 48” side to side. Both turrets show 1 - 6 in white and 7-12 in yellow, doubtless to indicate first and second turns. The windage drum is marked with multiple lines, so that you can count the turns easier and also directional arrows; however, the elevation drum does not, which is logical, as the zero-stop thread precludes this. However, directional arrows on the saddle would have been useful and the fixed reference point at 12 0’clock is very fine, with little contrast. I also noted that at x5 with the windage wound all the way to the right, you do get reticle shift to the left in the view, however, this did not affect general operation at all.

The optical system uses what DD calls CT-Glass (Clear Transmission) with their DDLucid coatings. They quote a transmission value of 96% in daylight and 93% at night, which is pretty impressive and compares well with Zeiss’s Victory HT (High Transmission) system, which first set the bar in this area. The reticle is in the second focal plane (SFP) and in this case consisted of a second generation (round) Mil-Dot pattern giving 10 Mil in both elevation and windage. The pattern is crisps, sharp and of light/medium width; oddly though, the 12 O’clock stadia is thicker than the other three. If you’re more about pure hunting, then there’s the option of the 4N reticle, which could best be described as a No. 4, with the typical inverted cross coming down from 12 O’clock and thicker outer arms at 3, 6 and 9 O’clock. I favour this style on all my deer and big game rifles, as it’s simple and offers good visibility above the 3 – 9 O’clock axis line.

The only thing that’s illuminated is the centre cross intersection with a fine red dot, which pretty much maintains its size and shape regardless of illumination setting. DD calls this their IFiber automatic position control. Try as I might, I could not see any dot at all from x1 – 4 and it really only became useable at x6.

Being an SFP system, the reticle is only true Mil-Dot value at x10 at 100m of 9.88cms, which increases exponentially, so worth 19.76cm at 200 and so on down range. DD also gives values again at 100m for x 20 – 4.94cm and x 30 - 3.29 cm, which is worth knowing. Overall, the optics appear bright with crisp and clear images that show colour realistically. I like the simple yet practical zero stop, which to a degree compensates for the unavoidable lack of rotation markers on the elevation turret.

Turrets are precise and crisp in operation, although the gripping slots on the magnification ring are a tad sharp-edged and hard on the fingers. As a relative unknown brand and product, the Nightfall Gen III proved a well presented and manufactured scope.