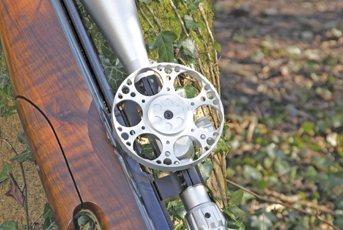 Within their range Falcon Optical Systems offer models that should cover the needs of most shooters, from a low magnification 1.5-5 x 30 all the way up (in magnification terms) to the scope that is the subject of this review, the T50.

Development of the T50 began way back in 2007 in order to update their T40 and incorporate FT-specific features. What Falcon came up with was a scope featuring a 10-50 x 60 specification that most FT shooters would consider ideal for its intended purpose.  The T50 has been on sale now for a couple of years with a RRP of £399. While this in no way be considered a small amount of money you do appear to be getting a lot of scope for the price, not only in terms of the versatile magnification range offered but everything supplied along with it.

QUALITY, QUANTITY, OR BOTH?

Included within the nicely padded box along with the scope, is a 125mm focusing sidewheel, flip-up lens covers, twin sunshades, alternative top turret, tools and a cleaning cloth.  In addition to all this you are supplied with set of Rangesports labels to mark up the sidewheel and spare turret neatly. This is a comprehensive package, especially considering the price point. I am afraid this raises my suspicions as to the quality of the product, is this all too good to be true?

The particular model I have on test here is the T50LM (Light Management).  Lenses within the LM model are the same as those within the FT version of the same scope but the lens set up is different. Falcon tell me that the revised optical design of the LM makes rangefinding on targets under darker conditions, such as dense woodland, easier as the image is brighter and detail therefore easier to pick out. Falcon plan to produce both versions of the T50 which may at first seem a little strange.  But by offering two variations of the same scope shooters can choose which will be best suited to their intended use. Indeed one or the other may be better suited to different people’s eyesight.  So perhaps the concept is no different to offering different reticules.

Before moving on to how the scope performs in the field, first a little more detail on the physical specification. The build is based around an anodised aluminium, one-piece, 30mm body tube. It weighs 995g and has a length of 440mm so this isn’t a small scope, and is comparable to other models with a similar magnification range. However, it feels surprisingly compact when mounted on a typical Field Target rifle.

Rangefinding is achieved using the now commonplace sidewheel focusing method which sits on the left of the saddle just ahead of the elevation and windage turrets. The oversized sidewheel fits snugly and is secured with grub screws. Turrets offer 1/8 MOA clicks as befits a target scope and the elevation adjustment range is 30 MOA. This should be plenty, assuming you mount the scope properly.

The x5 magnification range is taken care of by a deeply grooved and contoured ring, it lacks any kind of rubberised finish but thanks to those deep grooves it isn’t necessary as an aid to grip. The ocular lens is of the fast focus variety, this is armoured with rubber protecting the scope and user both.

A Mil-Dot reticule is installed in the 2nd focal plane and features four thick posts while the finer centre section sports eight dots between corresponding posts, there is no dot at the centre. One thing that I haven’t mentioned so far, and is included with each scope, is the instruction booklet. It’s by far the most comprehensive I have ever come across and includes details such as the anatomy and specifications, there is also a sensible troubleshooting guide. This is good to see and shows an attention to detail which is reassuring when it comes to the scope itself.

On the range I found the sight picture easy to obtain on x50 and the image is clear and bright. The reticule is a little heavy for my liking but I am glad Falcon has resisted fitting a complex design, thereby leaving the field of view uncluttered.

I left the original target turrets in place for the test. They handle very well thanks to the chunky design and using with gloves shouldn’t be a problem. Markings are clear and simply numbered for easy reference and the turrets can be reset to zero using a supplied key. The clicks are nicely audible but some of the feel has been lost due to the weather sealing O-rings fitted beneath the turret. As this scope is likely to be used in all kinds of conditions a slight loss of feel is probably a small price to pay if you happen to find yourself shooting in a downpour.

The magnification ring is fairly stiff although it is smooth and the nice design allows for a good grip. The focusing feels fairly stiff, but again smooth, and once the sidewheel is fitted the extra leverage gained makes for about the right resistance when rangefinding.  Basically none of the moving parts on this scope feel flimsy.

Focusing, and therefore rangefinding, is snappy; the target is either in focus or not! I found that it was possible to detect the difference in range between targets placed at about 53 and 55 yards. I also got consistent results rangefinding with the wheel returning to the same place for each distance when testing on both paper and metal targets.

TOO GOOD TO BE TRUE?

Is my suspicion that this £400 scope is too good to be true justified? Based on my time with the T50 I would have to say ‘No!’ with the caveat that I am not the biggest fan of the reticule, otherwise I can find little to fault with the package as a whole. Everything you need is included and there are no gimmicks, it is straightforward and honest! The T50 has a limited lifetime warranty which should allay any fears about quality and reliability that people may have. As indeed they may with any high spec product sold at relatively low price. Overall this scope seems to offer good value for money while achieving what it was designed to do.