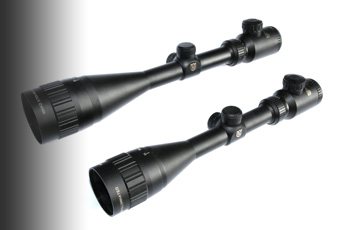 Nobody can refute the fact Nikko Stirling are very proactive in respect of the development and launch of new scopes, adding to their already comprehensive choice of optics and options. The Gameking ‘one-inch series’ being yet another and judging by the ‘one-inch’ stipulation, as per Nighteater I wouldn’t be surprised if we saw a 30mm series will eventually join this range. Currently though they’re available with one inch-body tubes and in both non-and illuminated reticle formats. Cosmetically, the matte black anti-glare finish is as practical as it is attractive.

On initial inspection the build and manufacture seem to be of a very high standard, and considering the price is a bonus in itself. The body is made from T606 Aircraft Grade Aluminium, so they not only feel solid but also are ruggedly well constructed to withstand the elements.

The Gamekings feature a relatively compact and chunky eyebell which holds the rheostat housing above and has a fast focus ocular adjuster. The magnification (zoom) ring has gold coloured etched numbers with the same style following forward to be seen on the adjustable objective and even at the very front which bears the scope name and specification.

The fast focus and zoom rings are ridged, allowing for a sure grip, and though they operate smoothly they operate with an equally assured feel. Not stiff but positive in the way they revolve around to the setting you chose.

Though many ignore them, a fast focus ocular can be set up to give a really crisp outline to the reticle – this particularly important on an illuminated ‘dotted’ cross hair.

The rheostat is situated in the ‘upper’ position, but just rearward of the zoom ring. This I felt was a nice design feature, as it is close to hand for quick adjustment. Everything else on the rheostat is also equally familiar in layout. Power is via a single CR2032 3V lithium battery that sits under the screw off cover cap and it has brightness settings of 0-11.

The Adjustable Objective is quite lengthy with raised deep cut ridging halfway along its length, and again operates just as assuredly as the other ‘rings.’ Thankfully the AO doesn’t stiffen up the more you rotate it, which is a common problem on many other AO design scopes found in this price bracket. On both models it’s marked for ranges of 15-yds, 25, 50, 75, 100, 200, 300 and the 00 infinity symbol. What I particularly liked - beside the fact that the numbers corresponded well to actual target ranges - is that there’s plenty of room between the 15-yd mark to the 25-yd mark and similarly from there to the 50-yd mark. This is good news for the airgun hunter because you are able to drop a dot of tippex on the AO at ranges you prefer to know and there’s easily enough room to do this in 5-yds increments. Another bonus is that the scopes focus down to less than 15-yds, as they revolve quite a way lower than this last range mark. Again you can if you wish mark the lowest range setting, but I’d recommend you check them yourself, as I found the lowest the 3.5 – 10X focuses down to is 6-yd and the 4 – 16X goes to 10-yds. Impressive and very useful for closer range shots when ratting. Incidentally, though I seem to be referring to these scopes strictly in relation to air rifle use, they’re actually centrefire rated!

The multi-coated lenses are obviously high grade as using these scopes on bright or dull days doesn’t disappoint. No glaring on the bright days and a clear bright sight picture on the dull ones. Add to this the useful illuminated reticle and you’ve got a very capable sight for any light condition.

The low profile ¼” MOA turret adjusters are protected by screw on cover caps that are ridged on the outer edge for easy removal or re-fitting. The adjusters have serrated edges making them easy to operate using your fingers, clicking audibly and very positively to each station as you index them around to set zero.

The elevation turret offers 3 ¾ full rotations whilst the windage offers 4 ¾ full rotations. Both have 60 clicks per turn. If you run out of elevation adjustment, Nikko Stirling produce a good quality one-piece adjustable scope mount but I had no problems zeroing in either scopes on my test rifles.

Incidentally, worth noting (as touched upon earlier) is the Mil-Dot configuration. The reticle layout has four dots above and below where the fine cross hairs bisect and four set either side. This results in approximately only the middle third of the sight picture having aim points as the thin crosshairs then stop just short of the thick stadia. The outer edge of these stadia obviously give you an extra aim point at the top, sides and bottom. Also, when illuminated only the fine crosshairs and dots ‘light up.’ Particularly impressive is how fine the brightness setting can be set and even on the highest setting there was no blurring and mil-dots still clearly visibly defined. On talking with John Bright from Highland Outdoors I discovered this was something they had worked on and the rheostat has been designed to work on lower power resulting in the finer adjustment and longer battery life.

I was pleased to see the inclusion of the 3.5 – 10 X 44AO IR specification optic as it’s been and still now is a favourite magnification range of mine for most general hunting situations. Due to the IR facility, and ability to focus to close ranges, this will make for an excellent indoor scope on rats or ferals and still do the business on bunnies in the fields. The 4 – 16 X 50 is now becoming a popular specification amongst many hunters. The fact it doesn’t have locking turrets isn’t an issue as the adjusters move very positively to set a precise zero and once protected by the cover caps you can be sure that zero shift isn’t going to be an issue.

To sum up; what we have here are two very impressive optics. If they are indication an of the Gameking range then whichever you choose you’re getting a stylish, practical and top quality, fully featured scope for a bargain price.