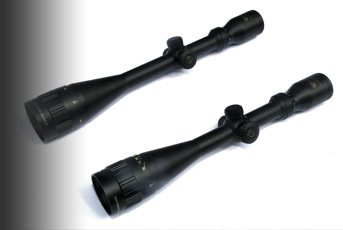 Nikko Stirling once again ‘tinker’ with their established Gameking Range of scopes, Pete Wadeson investigates the benefits of new royalty…

The main reasons I’m looking at the Gamekings again is because the company has not only opted to change the design layout for the illuminated models but is now offering a complete range with their LRX reticule. So whatever you opt for they now come in this new format, but if you still fancy Mil-Dot, which many airgunners do it’s also still available.

My interest was to see how the layout and LRX reticule works in relation to airgun use. Fortunately I’ve had a Nighteater with the LRX on my FAC-rated, BSA SuperTEN MkIII in .177 calibre for quite some time. The fact it has stayed there is proof that it does offer a useful amount of range marks for FAC airgun use. However, until the Gameking LRX series arrived I hadn’t considered how it’d fair for 12ft lb airgun use.

The LRX is a glass-etched reticule set in the 1st focal plane and is relatively simple in design yet effective. It consists of seven, progressively reducing hash lines on the vertical stadia that forms a pyramid shape with the top one set above the centre cross. Due to their diminishing width they can also be used to compensate for lead (moving targets) and windage correction. There’s also five, smaller but same length lines below the base of the pyramid so in effect you have 13 aim points for range on the vertical.

For the airgun shooter the pyramid works a treat. It’s uncluttered and once you’ve accessed trajectory on the range so you know which hash line corresponds to your pellet drop after your set zero it’s quite a simple yet useful reticule even for a 12ft lb .22 or .177 air rifle using medium weight pellets. The hash line above the centre cross gives you a hold under mark from your set zero should you wish to use it.

As for the layout Nikko Stirling have stuck with an adjustable objective (AO) which is marked for range, though as ever check to see what lines up with real distances. At the rear is a fast-focus eye piece and a ridged zoom ring. Depending on your views this is a bit of a compromise. The AO is less easy to adjust when compared to a side focus on the saddle and may also require higher rings to compensate for its extra width. However, re-positioning the rheostat to the side is a better move, but then means you can only have an AO.

Click values are ¼ MOA @ 100 yards and have been slightly extended giving approximately four full turns for both windage and elevation on the models shown with 60-clicks per revolution. As for the rheostat I like the change of position to the saddle and the dual colour facility with its five green and red settings. It offers a fine level of adjustment and indicates which colour by corresponding G (green) and R (red) letters. I tested a 4 - 16 X 44 and 6 – 24 X 50AO IR LRX. Simple reason; the former was interesting due to the lower objective lens to zoom range and the latter to judge this layout including illuminating facility against the one I currently use.

In conclusion I think changing the overall design layout and including the dual colour option on the rheostat is a real bonus. Also the LRX reticule on lower power air rifles now has me say that the Gamekings are and can be used for many hunting disciplines and the range is so comprehensive (nine new models added) - and unbelievably well priced - I recommend you contact the company for a brochure to decide which one will best suit your shooting needs.

For – Well priced and the LRX reticule looks useful

Against – Adjustable objective is not for everyone

Verdict - An improvement over the original, which was in itself a good scope