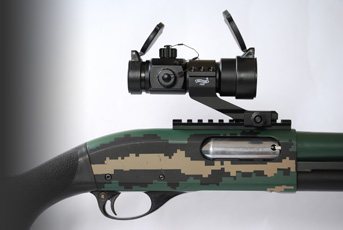 I recall getting hold of a Walther PS 22 red dot sight and thinking well it certainly looks the business. Coming as it did with a one-piece mount, flip-up lens caps and captive turret covers. It also reminded me more than a little of a certain, famous European design, however, I thought; looks are one thing and performance is another and no way could it be as good.

Well three years later and boy was I wrong, as I have put this little dot through hell on a series of shotguns and fullbore rifles and to quote the immortal words of the Timex advert: “it takes a lickin’ & keeps on tickin”.

Made for Walther doubtless in the Far East the PS 22 is described as an airgun sight, my experience showed it can go across the board on just about any airgun, firearm or shotgun. The design goes for a 30mm body tube and a rear-positioned saddle, the objective lens measures a generous 30mm. The distance between the saddle and bell is used by the one-piece, 6-screw, cantilever-type mount that shows a 1” Weaver/Picatinny-type clamp. It’s reversible and does offer some useful fitting solutions. A T15 (Torx) key is included for set up. Conversely it can be removed and a single 30mm ring substituted. A good example would be using it on a Ruger Mini 14 with just one ring.

The lenses are nicely bloomed and coated and the flip-up, lens caps follow the Butler Creek design. Turrets are typically small and simple with no notation of click values, but I reckon they are ½ @ 100-yards. With 48-clicks per turn you get four full revolutions, however they don’t seem to have an upper stop position as you just keep winding. Truth is with a red dot this is not so critical given the sorts of distance you will be using them at.

Turret caps are wired on so can’t be lost. The rheostat is the old drum-type on the left of the saddle and offers the usual 11-positions, with 0 at the top being OFF. The dot is 5 moa for that read 5” at 100-yards, which is pretty good in terms of target acquisition and placing the aiming point.

Perhaps most amazing is the clarity and concentricity of the dot, as it’s a near perfect circle, with none of the spider legs I have seen on other makes when set at maximum brightness. This effect really ruins your aim as it tends to obscure too much of where you need to see. Power is supplied by a single, coin-type, CR 2032 battery (included).

To date I have had the PS 22 on 223 Rem, 7.62x39mm, 8.5x63mm and perhaps the harshest test of all;12-gauge slug on my old Remington 870 pump-action shotgun. OK mine is looking a bit careworn on the outside but I have no complaints on ability and longevity.

Overall this is an amazing red dot sight, if you are looking for this sort of optic. Well priced, tough and efficient it’s hard to beat.

For: Good build, works well, great value for money and versatile across a range of firearms

Against: Not a thing

Verdict: Complete with mount, lens caps and a decent round dot if you are shopping in this area we highly recommend the Walther PS 22