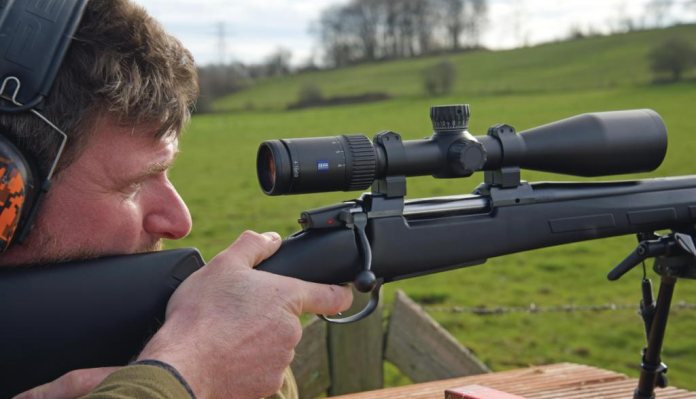 It’s good to see Zeiss aren’t just pushing premium optics to centrefire end users. They are also offering well-priced options like the V4, with key features that appeal to markets other than just stalkers.

The V4 is available in a variety of specifications and I chose the 4-16x50 as a general favourite of mine for hunting needs. The objective lens is recessed 10mm to aid protection and caps are supplied with durable rubber connectors. There is 45mm of mounting space in front of the spherical saddle and 55mm behind it. The windage dial is capped and there is a taller, easily dialled external elevation turret on top. This offers 20 MOA per turn and a total mechanical range of 56.5 MOA, allowing decent longer shot capability on what is still a realistically sized hunting scope.

It’s in the minutes

The ‘minutes’ are segregated into clicks, which are almost equivalent to ¼” at 100 yards and appreciated by those avoiding the more common European use of 10mm @100m clicks. Once zeroed, slacken the T8 Torx Allen screws with the supplied key and it can be positioned to show zeroed range. There is no locking capability or zero stop but a vernier scale exposes below the turret as you dial up/ longer. The windage is finger adjustable and its dial lifts to rotate freely back to show centre position. All clicks are tactile and offer repetitive dialling capability. The easily gripped, 33mm diameter turret with machined serration, shows a good compromise between grippy texture and overtly aggressive edges.

Parallax is controlled by the inner collar of the left-hand side dial, with no discernible internal mechanical noise, just like the zoom collar’s smooth travel. There does not seem to be any problematic backlash. The outer end controls 10 illumination settings and there are intervening off steps. A standard CR2032 battery resides under the cap and there is no positional auto-off.

At 652-grams, with a 368mm overall length, it’s an enabling hunting scope. The elevation turret stands only 12mm above the objective lens body, so doesn’t snag or tangle when slipped into a rifle case.

Thankfully, not all about ‘long-range’

Parallax correction runs from 10m to infinity, which means the scope can focus at ranges considered ‘core distances’ for rimfires and airguns. Eye relief has been considered as well, as buyers don’t all need 100mm+ clearance from the ocular lens, particularly on physically smaller rifles. Airguns and rimfires can really benefit from premium optics for use in poor light as the guns are economical to hunt, shoot or plink with. It’s worth noting that none of this technical versatility detracts from the scopes centrefire capability.

Three reticles are available, and I chose the ‘ZBi’ option in the second focal plane (SFP). It shows a small illuminating centre cross with larger skeletonised outer arms. It is calibrated with MOA subtensions when the magnification is set at 8x. The zoom collar shows clear markings and when dialled to 16x, reminds you the values are halved. The 6 o’clock stadia in the reticle shows a Christmas tree shape with windage aim-off markers. With a little practice and careful magnification attention, the ret offers fast options for holdover at varying ranges.

The reticle etching is fine and it can all be brought into crisp focus using the rear, rubberised ocular collar that offers a +2/-3 dioptre range. I certainly found it, and image quality to my liking, with sharp rendition throughout all magnification settings.

Zeiss offer detailed, dimensional reticle specifications on their website, which correlated well using the scope as a varminter on smaller quarry. The centre floating cross shows a good compromise as it’s moderately sized for precision daylight use, yet the 10-intensity settings allow it to be matched to poor light, without any hint of excessively bright, splintering reflections.

Zeiss advertise that their ‘LotuTec’ lens coatings shed external water. 90-minute vibration testing for mechanical shock is also advertised, with salt spray corrosion and immersion resistance tests proclaiming a 400mBar pressure resilience. The operating range for the scope is -25 to +50 degrees Celsius, with thermal shock tests also assuring reliability. In addition to all of this, Zeiss use inert gas to avoid internal fogging.

I found the 90% light transmission quoted, quite modest. This is not something I can scientifically test but the image was certainly reassuringly bright when used in poor light, where I never found it lacking.

Zeroing and longer dialled shots to 300m showed no mechanical error, with each click giving the promised angular correction. At 8x magnification, the measurement on target was also clear. The 90mm eye relief is ideal on all but heavy recoiling rifles and offers greater flexibility to attain and retain a good sight picture through recoil in awkward positions. At 8x and below, it was possible to watch bullet impacts and shot reactions, even while using snappy calibres.

Other factors to note were that as the light faded, image brightness remained linear, with no specific ‘steps’ requiring sudden magnification reduction.

Even though lower magnification will increase image brightness, it’s nice when the alteration isn’t forced. To trial the adjustability beyond 500 yards, I also paired the scope with a .243 rifle and after zeroing at 100-yards, I had 48 MOA to reach further. On the .308, for example, that would have allowed dialled shots well beyond 1000 yards, without resorting to inclined rings or rails.

This is a scope that offers exactly what it says it will and Zeiss clearly prioritise optical engineering functionality over marketing hype. It illustrates good value and realistic attainability to all users, without any unnecessary functions or faults. I liked using it.