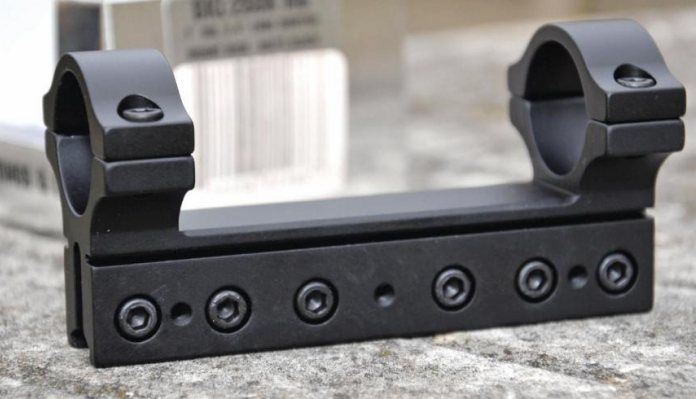 BKL Mounts are among the best quality available and are constructed from aircraft-grade aluminium, so quality is assured. This US-based brand now manufactures a range of mounts and accessories for the discerning shooter, and on show here is one of their one-piece mounts, designed to give a higher sightline and fit a scope with a 1” body tube.

One-piece mounts are primarily used on recoiling spring or gasram powered airguns, where the comparatively violent two-way recoil characteristics can play havoc with the sighting system. The dreaded problem of scope creep, where the scope, mounts, or both, move along the rails as a result of the recoil, is a frustrating phenomenon, which is tamed in an instant with a decent one-piece mounting set up. The BKL 260H MB shown here has no less than six tension bolts along its 4” long base, and its that extended area of grip that makes the difference.

As per usual BKL mount design, this mount needs to be slid onto the dovetail rails from one end, and then clamped evenly into position. If the mounts don’t initially fit, the base screws are removed and placed into the spreader holes to widen the aperture. All very neat and highly effective