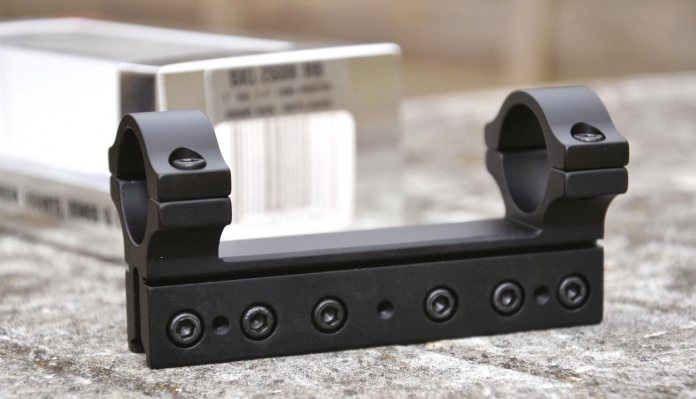 BKL Technologies manufacturer one of the largest selections of scope mounts in the U.S.A. They are compatible with rifles from some of the largest rimfire and airgun manufacturers in the world, including; Air Arms, Daystate, BSA, Crosman, Diana, Gamo, Webley, Anschutz, CZ, Feinwerkbau and Remington. Their range of products includes rings, standard mounts, risers and dovetail to Weaver/ Picatinny adaptors. The BKL 260H MB mount is a one-piece design that fits onto dovetails. It weighs 5.1 oz and fits 1” body tubes. It’s a strong design and manufactured from aircraft grade aluminium with a matt black finish. It’s designed to give a higher sight line and its primary use, is on recoiling, spring or gas-ram airguns. These mechanisms have comparatively violent two-way recoil characteristics, which can cause scope creep. Here, the scope, mounts, or both, move along the rail due to recoil forces, which is a frustrating phenomenon. The 260H mount manages to solve this, it has six tension bolts along its 4” base, and it’s that extended area of grip that makes the difference. As per the usual BKL design, it needs to be slid onto the rails from one end, and then clamped evenly into position. If the mounts don’t initially fit, the base screws are removed and placed into the spreader holes to widen it. A neat and highly effective design.