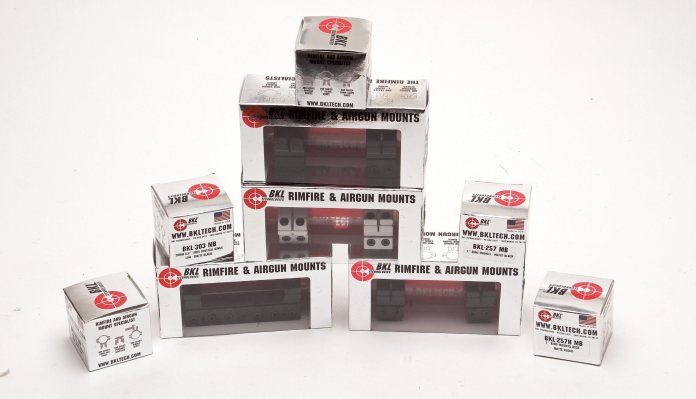 Ignore the scope mount when you buy a new rifle/ scope combo at your peril, as it’s the crucial part that translates your aim to game. Get it wrong and zeroing in, correct adjustment and reliable scope use will never happen and have you tearing your hair out.

When I choose a mount for my rimfires or testing these days, I try and use ones that have an integral base and one that does not use a separate clamp. Some mounts of this type tend to tilt the scope off the bore axis, not good; that’s why I like the BKL range of mounts, as they sit perfectly perpendicular to the bore axis. BKL call this the Auto Centring clamping system.

Optics Warehouse stock a complete range of BKL mounts that are made in the USA and Shaun sent down a range of airgun and rimfire one and two-piece mounts and a selection of risers and mount converters. Each mount is made from aircraft grade aluminium; so, lightweight yet very strong and available also in ring/scope sizes of 1-inch or 30mm.

First up, were the BKL-167 MB, which are 1-inch long Tri mount dovetail riser in matt black. These are really handy for elevating your scope on an FT rig or rifle that has an adjustable cheekpiece, or to clear a small ejection port on the rifle to avoid foul ups. They simply slip on, and if they are tight, BKL have a neat way of widening the mount legs by removing the two securing screws and then inserting one into the widening hole that when turned a ¼ turn at a time will widen the clamp.

Now, the biggest selection, the 200 series with two-piece or one-piece mounts, the BKL-257 MB are the 1-inch ring mounts, i.e. two of, in matt black and both standard and high. Again, you can widen the mount clamp as before and these are single mounts with a split ring. They have a single clamping screw and top ring mount. I like these, as they are slim and look really good on an older spring or classic gun and they mount squarely and are very light.

Still in the 200 series, are the one-piece mounts and double strap, two-piece mounts. Here, the two-piece mounts I had were in matt black or matt silver. The single strap, one-piece types BKL-260 are four-inches long and have six securing screws to evenly clamp the base. Blimey, that’s a lot but it makes sure they do not shift.

The mount I really like is the BKL-288 MB, which is a onepiece, 1-inch mount but has an adjustable elevation feature. You have six clamping screws as before but now you have a small Allen screw, both sides front and back beneath the ring sections. These are loosened and a scope is tightened in to rings, this now sits on a small elevator ring that when adjusted anti clockwise rises the scope in the rings, and when pivoted forward enough, the twin side screws can be re-tightened. This system allows a flexible MOA adjustable base and also stops any scope torque on the scope body – nice.

Also, in the 200 series are the double strap mounts, again available in silver or matt black and standard or high. The BKL-263 S are the 1-inch silver double straps, and as they say, have are two-piece mounts with securing screws to each clamp and rings tops.

These are quite large but light and you can spread the clamps as with all the other BKL mounts and the top strap section to the rings has two separate ring tops, i.e. not two screws in one top. This means that if any of the screws become lose it is very unlikely that the other ring top will be affected and so ultra reliable.

If you want a 30mm ring, then the 300 BL series is what you want. I had the BKL-303 MB two-piece mount. These are available in varying heights. They are single strap and again look great on springers or older guns but are obviously good for any new pre-charged air rifle.

Finally, a couple of useful mounts; first, the BKL-566 MB, which is a dovetail to Weaver/ Picatinny mount. It is two-piece, in matt black, and really handy at converting an air rifle or rimfire rail to accept Weaver mounts, especially when a Night Vision or Thermal device is used.

Second, is the equally useful BKL-610 MB, a single ring and in this case 30mm ring mount with an adjustable bubble. You clamp this upside down on the scope’s body, so that the clamping section is at the top. Instead of a second clamp leg, you have a thumb screw that can be loosened, so that the long visible bubble leg can be swung out and positioned in a variety of positions for instant eye viewing levelling of the rifle to stop cant.

I fitted the cant levelling bubble mount on the 7x57AK Imp rifle, which is fitted with a Kahles 6-24x Tac scope and is used for longer range shots, where any cant to the rifle would be disastrous. It worked very well and it will be staying on it!

The 1-inch 200 series I tried on a variety of air rifles and rim fires, both one piece and two piece mounts and again I really liked the totally level mounting position that these BKL mounts give you. Yes, I did have to widen a few, as they were tight but better that than too loose.

Also, the elevation adjustment mounts are really handy on the 11mm version of the Weihrauch HW35 air rifle, where they have a ‘droop’ barrel from the factory and so it was a lot easier to zero in with the BKL 288MB.

The risers were very handy for Weaver only type thermal and NV kit and the Pulsar Trail thermal weapon sight was excellent on an HW66 .22 rimfire.

Finally, I fitted the 30mm single strap mounts to a .22PPC Stolle Panda benchrest rifle with a Kahles 10-50x56mm scope and these allowed perfect scope to bore axis alignment and also looked the part, again a keeper.

This is only a small part of the BKL range and I have used and bought their mounts for my rifles before this test. I rate them, as their uni-body design eliminated that ‘tilt over’ that some two-piece clamp mounts have. They are wellmade, huge range, well-priced and tough yet lightweight.