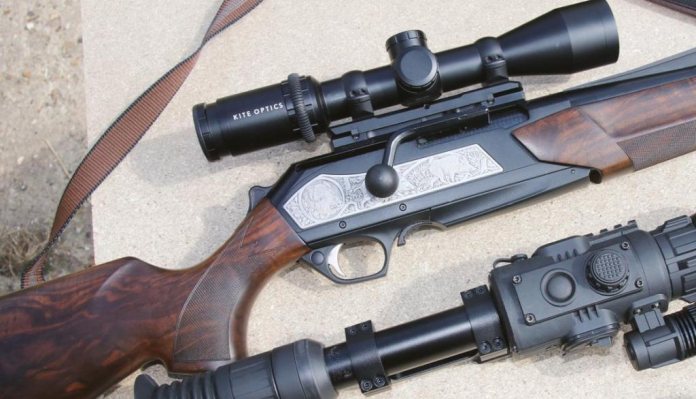 Quick detachable (QD) scope mounts are no big deal these days and have been in use for decades, but what is a big deal is repeatability. By that, I mean the ability to remove the mount and optic (combined) then re-fit it without a perceivable loss of zero. If that’s not going to happen, then it rather negates the principle, as it must be re-zeroed each time.

When it comes to fixed and QD mounts, I think of Warne in the USA, Contessa of Italy and Recknagel of Germany, all offer some innovative solutions to our needs, and I have used some of them over the years. Also, companies like Blaser, Mauser, Sauer and Strasser offer dedicated QD systems for their various firearms. So, it’s a smart manufacture that can offer mounts for their guns and maybe even optics too. Enter Browning, who launched a range of scopes made for them by Kite Optics but to their requirements. Keeping the momentum going, they then approached Dentler of Germany and used their unique QD mounting system for their BAR (Browning Automatic Rifle), Maral SF (straight-pull) and X-Bolt (boltaction) series.

Browning renamed Dentler’s system Nomad, which offers a deal of ingenuity and a unique, adjustable base that allows the scope used on one rifle to be transferred to another with no loss of zero. The system is offered in all three rifle actions Long, Short and Super Short. Rings come in 25.4mm/1”, 30, 34 and 40mm and three heights 3.5, 6.5 and 9,5mm.

Nomad is in two pieces; the single ‘Base Rail’ is fixed to the receiver using the standard threaded holes drilled in the top with 10Torx screws (supplied) to a torque setting of 2 Nm (Newton meters). Be aware that these screws are quite small and too much pressure might snap them. Browning recommends it’s bonded to the action and thread-locking the screws. You might not want to do this, as it will ruin the finish if you decided to remove it, but then again, why would you? I fitted up my Maral and just thread-locked the screws and all is still tight.

The Base Rail has a vertical hole in the middle and a machined slot at either end; on the left side, is a captive T-key that controls a rotary locking bar. It’s marked with arrows and words as follows; <<

< CLOSE; unlocked move in the directions of the arrows to close, OPEN >

>> - mount is locked, move in the directions of the arrows to open. Browning also offers a slightly lower unit for the Maral, with a slot-headed locking bar, as opposed to the T-key, which reduces height and promotes better eye/scope alignment.

To this, fits the removable (upper) ‘Mount Rail’ that accepts the rings and mirrors the Base Rail connection below with a heightadjustable, waisted, locking post for the central hole and lugs either end that engage with the slots. There are also six, countersunk holes for fitting the rings, which give a degree of positional adjustment. These come in various heights to suit the scope build and eye relief. The lowest rings will not let the scope move forward as far as higher options as it will foul on the rear of the mount.

The Mount Rail fits with the cut-out on the left, opposite on the right is an Allenheaded lock screw. Open the locking lever and drop the mount onto the base, so that the post and lugs align, then shut the lock. If it does not fully engage, you must adjust its height, by slacking off the lock screw (right side of mount rail) and screw the post up or down until it does. It should feel firm but not forced and does not need added leverage to do so!

Wax on, wax off

Fit the scope and adjust position, eye-relief etc and zero in in the normal manner. If, for example, you use different optics on your gun, it’s a simple matter to buy more Mount Rails and fit them up. There’s even a Picatinny base if you want a red dot or night vision. On my Maral SF I have a Mount Rail with a Kite 1.6-10x42 for general use (pig and deer) and a Picatinny with a Vortex Razor red dot for close range. Return to zero is 100%, so no worries about swapping in the field, which is quick and easy. There’re various Mount Rails to suit specific and general uses; two for AIMPOINT and DOCTOR red dots, three European versions for Schmidt & Bender, Swarovski ZR and Zeiss ZM, the standard ring base with low, medium and high rings and the Picatinny.

The ‘Multiple Mount’ is a bit different, as it allows the use of a pre-zeroed optic on a Mount Rail from a single mount Base Rail from another Browning rifle to be fitted to another gun. So, you could go from Maral SF to X-Bolt. And without having to change zero either, so you can use one scope on two rifles if that suits.

It fits like the Base Rail but is deeper and consists of fixed inner/lower bases and a moveable upper section, as it must accommodate the integral windage and elevation mechanisms. It will accept the same Mount Rail as used on the single Base Rail mount. At the front are two, opposed jam screws, so undoing the one on the left and winding in the one on the right will move the front of the base to the left, giving a reticle point of impact corrections to the right and vice versa. There are no clicks, so a bit trial and error, what you’re essentially doing is angling the scope off the bore line to achieve the correction. Once set, both are screwed in together to lock.

Elevation is at the rear, with two screws on the left (adjuster front left) rear left (lock) there is a further locking screw in the rear of the base. This correction hinges vertically at the front, so the whole base moves up and down at the rear. ¾ – turn gives a top to bottom movement of around 2mm, which looks around 20MOA of angle.

The idea is clever, if you feel the need to swap scopes from one rifle to another but is reliant on two aspects. One – how much correction you use up on zeroing the scope on RIFLE 1, as all guns and ammo/calibres shoot differently, and you might use up too many clicks that might not be compensated for on the Multiple Mount. Two – unlike a conventional fixed scope that is parallel to the axis of the bore with the reticle moving in the same plane. Re-zeroing on the mount, windage is an angular movement in relation to the bore. Yes, you will be on point of aim/ impact at your set zero range, but will probably drift off as the distance increases, due to the angular nature of the correction. Not perhaps a big problem for a shorter range hunting rifle, as you could slightly offset the zero point that would reduce the angular difference at longer ranges. But for longer range work this would be exacerbated.

Marking the mount and receiver shows a total windage movement of 4mm and an elevation of 2mm. Through the scope and measured at 88” there’s an inch of lateral movement, which translates into a rough figure of 40” movement at 100 yards. And about half that in elevation. The oddest thing is to see the amount of lateral offset from left to right with a most noticeable angle at the extremes.

With reference to the single Base Rail mount, the ability to quickly and easily swap optics with a guaranteed return to zero is most practical. Taking my Maral SF as an example, I could fit a mid-range compact for woodland work or driven boar. Or take it off and mount something larger for longer ranges; or, if it took my fancy, swap to the Picatinny rail with a red dot on top for close range. This option would also allow me to fit night vision too.

For the UK, the rifle of choice from Browning will doubtless be the X-Bolt, which is a solid and quality design available in a host of calibres and model options. I would get the single Base Rail mount and two Mount Rails. It’s a pity Browning does not offer the Nomad for their T-Bolt rimfire, as that would make it versatile!