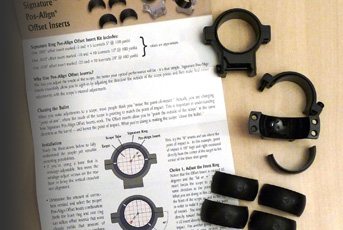 It’s an acknowledged fact that riflescopes are most reliable when their lenses are most closely aligned on the same axis (optically centred), as this reduces distortion and ensures that the adjuster mechanism is not under undue stress. This of course requires the body of the scope to be aligned with the bore of the rifle on which it is mounted. Most of the time, fortunately, gun manufacturers do manage to line up the dovetails or bases on the receiver, barrel, or cylinder (in the case of spring-powered airguns) with the barrel, and to produce barrels which are themselves concentric. But this is not always the case, and barrels may also become bent, or even droop (in the case of break-barrel spring-powered airguns) in the course of their working lives.

In these circumstances, the answer may be to fit a set of adjustable mounts. Windage- adjustable mounts are widely available, from Millett for example, and Sportsmatch do some excellent one- and two-piece mounts that are adjustable for both height and windage. All of these mounts work by adjusting opposing screws, but there is another way of addressing the problem, in the shape of Burris’ Signature rings and their Pos-Align offset insert system.

Burris’ range of Signature rings includes a wide variety of models to fit almost every type of rail and base. What they all have in common, however, aside from being very well made, is that all the rings are made over-size to accommodate a plastic insert between the steel ring and the scope body. These Pos-Align insets fulfil several useful functions: they stop the rings from marking the scope, retain constant tension regardless of temperature, and dampen recoil. More importantly, however, is that the inner profile of the rings is concave and the outer profile of the inserts is convex, so the inserts are able to swivel within the rings (but not to slip out of them), which makes them self-centring, and in turn ensures that the scope tube is evenly gripped by the rings and neither strained nor distorted by misaligned rings.

The Pos-Align system also proves its worth when adjustable mounts are required, since it allows for pairs of offset (non-concentric) inserts to be substituted for the standard concentric ones. In the case of 1” rings, an insert kit is available that contains three sets of inserts in pairs comprising one positive (+) and one negative (-) insert with offsets of .005, .010 and .020, that provide corrections of 5”, 10” and 20” respectively at 100 yards. The offsets can also be combined: for example, by fitting the .020 inserts in one ring (front or rear) and the .010 inserts in the other a total deflection of 30” at 100 yards can be obtained. Similarly, fitting the .005 inserts in one ring and the standard (0) inserts in the other gives a total deflection of just 5” at 100 yards.

Moreover, because the offset system is based on ring-shaped inserts, the offset can be set at any angle. Thus, if the point-of-impact (POI) is at 45 degrees from the point-of-aim (POA) the offset inserts can be tilted by the same amount, the angle being easily measured on the rings by using the joints between the upper and lower halves of the rings and the inserts as datum points.

To set up a scope in the Signature rings using the offset Pos-Align the first thing to do is to centre the optics by dialling the windage and elevation adjustments to their mid point. Next you need to establish the inherent error in the gun. This is done by mounting the centred scope in the rings using only the neutral zero (0) inserts and shooting a group. Once you have a group, measure the distance from the POA to the group centre (MPI) and the angle (from the horizontal) of the line between them.

Let’s assume the rounds have gone high and right, striking the target at a distance of 25” and an angle of 45 degrees from the POA. Simple arithmetic shows that for a 25” correction we need a pair of .020 inserts for one ring, and a pair of 0.05 inserts for the other (20 + 5 = 25). If the .020 inserts go in the front ring, the thick (+) half will go in the lower half of the ring and the thin (-) half will go in the upper half, after which the inserts will be rotated clockwise so that the join between them lies at 45 degrees to the horizontal line formed between the top and bottom halves of the rings (i.e. top left to bottom right). Moving on to the rear ring, the same angle will be used, but this time the thick (+) half of the insert will be on top and the thin (-) half underneath. Shooting a second group should confirm that the MPI now corresponds sufficiently closely to the POA to require only minor adjustments to be dialled in on the scope.

I discovered the Pos-Align system when I was looking to solve a zeroing problem on one of my own rifles. The type of error (shooting low), combined with the larger tube size (30mm) and the mounting system (Weaver) ruled out any other adjustable mounting system, and the correction needed was too great to achieve simply by shimming the rear mount with strips of film negative or coke can.

Burris’ Weaver-type rings are available in three heights (medium, high and extra-high), and feature a one-piece “Zee” clamp. The clamps use slot-head screws, but those holding the ring halves together have Torx heads for which a matching Allen key is supplied, though it is obviously preferable to use a torque-limiting screwdriver for maximum control.

In the case of 30mm rings there is no separate insert kit, but the rings are supplied as standard with a pair of zero (0) inserts and two pairs of .010 offset inserts, allowing either 10” or 20” of adjustment. In the event, I needed almost all of the 20” provided by installing both offset pairs, after which all I had to do was to dial down a dozen clicks (3”) on the scope to obtain the desired MPI, secure in the knowledge that neither the main tube nor the internals were under undue stress.

Easier Than It Sounds

As with many ingenious designs, describing the Pos-Align system makes it sound more complex than it seems in practice. In reality the only downside to the process is having to mount your scope with the zero inserts to quantify the initial error before you can correct for this with the offset inserts and get a final zero. When all the benefits of Burris’ rings are taken into account, however, this seems a small price to pay to get a stress-free, optically-centred zero.