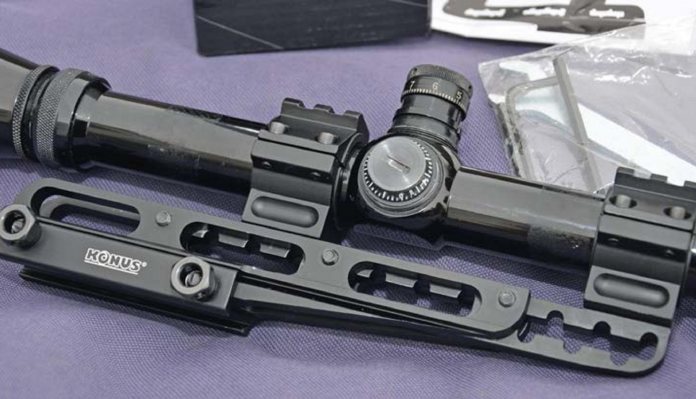 Mounting a scope can be frustrating when everything isn’t perfectly true and old problems such as barrel droop, can interfere with zeroing the rifle. Running out of adjustment on a scope’s turrets is a pain, and just having the ability to circumnavigate the problem brings confidence. That’s where the new Cantilever Mount from Konus comes in.

Everything feels precise and well made, but what quickly becomes apparent is the clever design. First, slacken off the three bolts with the Allen key supplied and the entire central section, which incorporates the twin rings, can then move up, down, forward or back. A series of cut-outs allow for the bar to come to rest at set intervals if required. It can also be raised or lowered at each end, then locked into place, basically anywhere within the range of movement along its axis. The centre bar can extend up to 1.5” but bear in mind that the mount can be fitted to the gun facing either way, and the number of positional permutations is huge, providing significant ‘off-set’ in either direction. Keep the bolts slack, and the central bar is free to make big adjustments. Tighten a little more and subtle changes can be made in a controlled way. Trial and error play a part but the principle and adjustment process is wonderfully simple.

Konus specifies the mount as having seven different settings, but once you play with it, it’s clear there are many more. If you need to raise/lower the impact point, then just raise/lower that central section and set in a tilt as required. Get the zero into roughly the right area, then use the scope’s turrets to make the finer adjustments. This way, you can effectively centre the optics in the accepted way, minimizing internal stress on the scope’s components.

Admittedly this mount only allows for adjustment to the elevation, so it’s not really fully adjustable. That said, in my experience, most optical systems allow for a central setting windage wise. The main problems do tend to arise with elevation, where the aforementioned barrel droop or trajectory/ sightline issues can dictate play. Having a device to counteract such interference is always reassuring, but the sheer simplicity of design as mentioned is impressive. Everything hangs off those three bolts. Move the centre in increments, re-tighten the bolts, and gauge the point of impact. Adjust accordingly.

OK, that’s the main specification, but Konus has been clever and incorporated a couple of bonus features too. Fancy adding additional accessories, then there are Picatinny rails on top of the rings. A neat feature, but the rings themselves also come with aluminium spacer inserts, and this means that they will accept scopes with either 1” or 30mm body tubes.

Currently, the mount is only available to fit Picatinny/ Weaver-style rails. The manufacturers would consider a dovetail rail specification, if there were to be enough interest, according to Range Right, the UK importers.

Overall, a great piece of design work, which could get you out of trouble mounting an awkward scope with a limited adjustment range as well as a multitude of other irritating scenarios, where achieving zero is compromised.