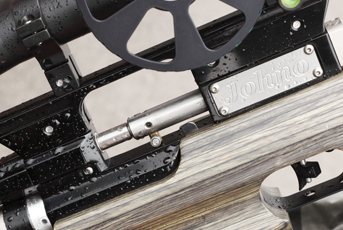 There are many fine products on the market for us to choose from when it comes to our shooting. Manufacturers and suppliers though have to tread carefully if they are to have a successful range of products. Unfortunately this sometimes means compromise when it comes to a final design but allows a product to appeal to as wide an audience as possible. Launch something aimed at a very specific market and you had better be very sure of your business model.

Happily most of the time the designers get things right and those little compromises we can live with, that’s if we notice them at all. We don’t always have to compromise though and there are products and accessories out there that enable us to turn something good into something perfect for our needs. The products of AJP Engineering are among those out there to help fulfil our needs, and dare I say, whims.

What started out for Anthony Johnson (the man behind AJP) as a hobby, making bits and pieces for shooting friends, has developed rapidly. AJP Engineering now make a number of different parts specifically designed to enhance the performance of existing products and range from knobs to oversize turrets for telescopic sights, as well as standalone items such as scope rails.

BEGINNING WITH THOSE KNOBS

Many rifles now come with lots of possible adjustments and many
of these are made with the use of an Allen key. But by replacing the Allen bolt with a knob that can be tightened by hand, adjustments can be made at any time you choose and accessories such as balance weights can also be easily removed for transit. A knob may be a simple thing but it is surprising how useful they can be and yet sometimes so difficult to come by. Prices start from £20 for a set and the machined aluminium heads are available with different thread sizes and lengths to suit the particular application.

Scope rails seem very popular on the Field Target scene at the moment. This is part born out of necessity as the objective lenses of scopes seem to have become bigger and bigger over the years. Partly through the realisation that if you mount a scope higher a more natural head position can be adopted when shooting from a typical FT stance, which is better for overall stability.

The rail featured here is designed for the Air Arms EV2 and when fitted raises the sight line by 16mm. Some thought has also gone into the design in that the length matches perfectly that of the EV2s dovetails while the rails own dovetails are extended a little for more flexibility when mounting a scope. A cut out also ensures plenty of room remains for loading.
Different heights can be specified and there are models to fit most popular air rifles. A gradient can also be built into the rail doing away with the possible need for the packing of scopes within mounts to optically centre them.

Sticking to the subject of scopes many now feature target-style turrets which offer clearer markings and are easier to operate especially in cold conditions. AJP though offers a range of replacement turrets for various makes and models including Nikko Sterling and Leupold. Turrets are machined from aluminium and anodised and can be supplied pre- marked with very clear numbering or left blank for users to add their own.

Why might these be better than the originals? I think it is just the fact that these turrets can just offer a little bit extra in terms of clarity and ease of use, especially if you happen to be longsighted. The difference may be subtle but sometimes in the heat of competition, or indeed out in the field, that gain in efficiency can make the difference between getting the shot you need or a miss.

The featured products here are just a selection of those offered by AJP; other examples include 34mm scope mounts suitable for models such as those within the Schmidt & Bender PMII range, along with aftermarket side wheels for range finding scopes popular on the Field Target circuit.

Many of the AJP accessories have been driven and developed from the requests and ideas of Field Target shooters and speaking as one I can tell you we aren’t very forgiving of any shortcomings in our equipment. To that end the finish is of a high standard and the machining is what you would expect to find from something manufactured using modern techniques and equipment. Specifications can also be altered to suit individual needs, so these products are useful not only to FT shooters but would be equally at home in many areas of shooting. Many items can also be personalised with, for example, engraving and different colour schemes.