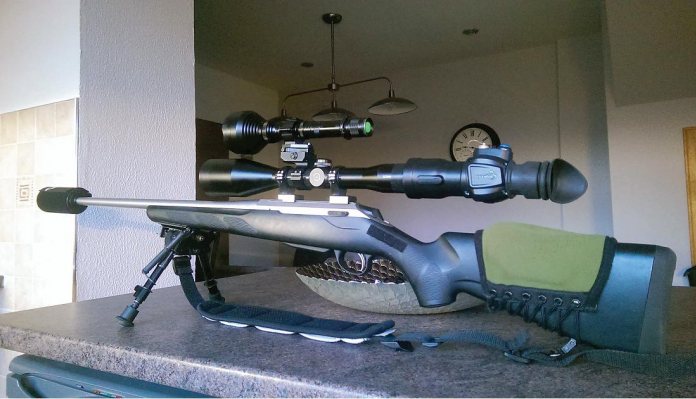 After shooting the big dog fox with Ben on the Earl Park estate, we continued to have a scan around with the Pulsar Quantum XD38S thermal spotter, to try and tidy-up some more of those old foxes that Ben wasn’t able to get onto with his truck-mounted lamp. Tony Jones from Night Master had driven up to Scotland later in the night and met up with Ben and me, so it was now the three of us, armed with two XD38S thermal spotters and the Apex XD75 thermal scope on my Tikka T3. We also took the Night Master Atom, as Ben had seen it at the demo evening and wanted to see what sort of damage this £500 rear-mounted, digital add-on could do for his rabbit control.

Alongside the Atom, we used the Pulsar Recon 870R digital spotter, which compliments the Atom perfectly. The Recon 870R was fitted with a little Night Master 400-IR IC illuminator, which lets you spot out to at least 300 yds.

So we set off again in Ben’s Landy and started scanning the fields along the way. Within 10 minutes we saw a fox running up the estate road. So we quietly got out of the vehicle to try and cut it off by walking across the field, but the sly fox made it to the safety of the estate garden and was not seen again that night. Yet again, Ben was blown away with what he could see with the thermal spotter compared with what he was seeing with the lamp. While scanning the fields he said (a few times), “I never realised I had so much wildlife on my ground”.

We slowly made our way through the estate tracks and fields, and then Ben picked-up a heat source on his side and asked me to double check if it was a fox. Indeed it was. With Tony and I not knowing the ground, I whispered to Ben, “What’s the best way for us to get onto this fox?”. We decided after watching it for a couple of minutes to go on foot. Ben and I left the Landy parked out of sight behind an old barn and Tony stayed to spot from the high ground. We followed it using the thermal and digital spotters to keep track, but it had no intention of stopping. We continued on through three big fields, keeping in to the sides and along fence and tree lines, to try and prevent being detected. We lost sight of it for a bit and then saw it making its way into a surrounding wood. I got to around 200 yards from the wood, then lay down with the rifle on the bipod and asked Ben to give it a squeak off the back of his hand.

There it was. I picked up the heat signature again through my thermal weapon scope. The fox was standing about 20 ft into the wood but the scope was still able to pick it up. I knew that if I had taken a shot with the fox standing in the wood, the chances were that the bullet would deflect off a branch, so we were hoping that it would come out to Ben’s squeak. Very hesitantly, the fox started moving towards us and out of the woods, then started running towards the squeak. It stopped suddenly and sat down, staring in our direction, so I placed the crosshair right in the middle of its chest, squeezed the trigger and heard that unmistakable, ‘meat slap’ sound of the bullet impact. A nice 200 yard shot and a clean kill. It was also a fair sized old animal, which had clearly been kept alive by avoiding Ben’s lamp.

At this point, Ben was even more impressed with the art of ‘thermaling’ rather than lamping. He told me he would never have squeaked it out of the woods with a lamp shining in its eyes. After getting fox number two, we headed back to Ben’s man-cave for a cuppa and got his .22 rifle set-up with the Night Master Atom, so he could have a look at this piece of low-cost night vision, which I have had a lot of success with. When setting-up this rear scope add-on, you must remember that you are setting-up your scope to the Atom and not the Atom to your scope. In some cases it takes some tweaking of your scope’s focus adjustment and moving the Atom forwards/ backwards, before you get a clear image of your cross hairs and a good field of view. The Atom was originally developed for use on airguns and rimfires, but I have tested it on my .243 and a Schmidt & Bender 8x56 scope, and have had some great kill shots between 80 and 230 yds.

We were soon set up and ready to go again. Ben decided we head out to an area where he had seen a few rabbits hopping around.

On arrival, we had a quick scan of the fields with the thermal spotter and could not believe what we were seeing. The fields were absolutely moving with rabbits! Ben had previously told us that the neighbouring farmer had blamed him for not controlling the deer sufficiently, but the image through the XD38S told a completely different story.
It was clearly the rabbits that were destroying the crops and not the deer. I took the .22 rifle with the Atom on it and got straight to work and soon started picking them off. Then both Tony and Ben had a shot – all agreeing that it was a great little night vision add-on for the money. It just takes a bit of time tuning the scope to get it absolutely right for your eye.

It was late, so we decided to spend the last hour or so scratching around the estate looking for foxes. Tony and I planned to head back down the road as we were up in a couple of hours to go deer stalking and who knows, maybe see a fox whilst watching the deer – for me, foxes always come first. While driving between a couple of fields, I saw movement through the thermal spotter but only caught the back-end of whatever it was, making its way rapidly into the cover.

Ben’s plan of attack was to drop Tony and I off and drive the Landy on the road in the direction where the fox was heading and maybe cut it off or send it back towards us, so then we could get another look at it. We waited on Ben getting along the road and up the side of the field, then picked the Landy up in the thermal spotter. Moments later, I saw the fox cutting back towards us, so the plan worked. But Ben was sitting in the motor in my direct line of fire. So I called his mobile and asked him to head back down to the bottom of the road out of sight. The fox walked along the fence line back towards us then lay down in a dip in the ground and all I could see was its ears, it could not have settled anywhere worse. I lay down prone with the crosshairs placed right between its ears for roughly 10 minutes, with no movement at all.

It’s not the first time I have seen this. A couple of months earlier I had Mr Fox laying sleeping, so to get his attention I risked a squeak, otherwise we could have been there until morning. Tony gave a little squeak but nothing, so he tried something louder, but still nothing. After a shout and a clap of the hands, the fox still didn’t lift its head, even when the claps got louder. I thought we might have to get my truck and start beeping the horn! The same thing was happening with Ben’s fox; it would not stand up for love nor money. There was only one thing left to do, and that was to stalk into it. Before I got my thermal spotter, I had never seen anything like this before with the lamp. Thermal allows you to observe the habits of animals, without them knowing you are there.

We crawled along the fence-line, and even after Tony accidentally twanged the fence wire with his size 12s, the fox still never stirred. So we kept on stalking but, the further we went the lower we got and lost sight of the fox in the dip. I felt we were going to be right on top of it and then too close to shoot. So we decided to make our way back to where we were originally laying and create another plan from there. Back into position, we couldn’t pick-up any heat signal, so I tried standing up for a better look with the spotter but still nothing to be seen. Then I looked over to my right and saw a fox running up the next field. When we were moving back to our original position, it must have gone through the fence and got away.

That was one lucky fox. The thermal imaging equipment normally seals the fate of most of them I come across. But I have to admire the ones that get away – using their senses and field craft to give me the slip, despite all the equipment I’m using. It makes my job as a fox controller even more challenging and interesting.