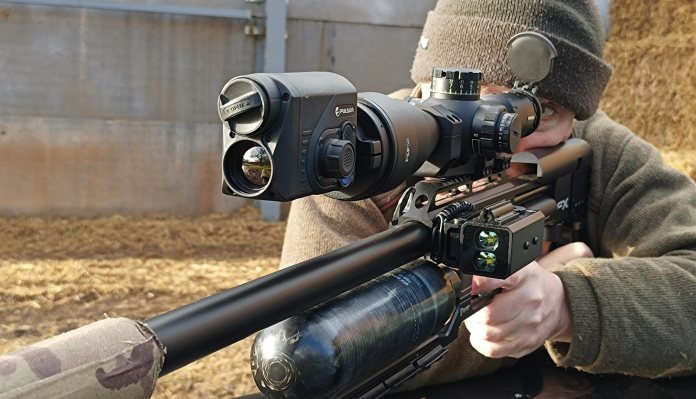 Front-mounted (a.k.a ‘clip-on’) night-vision attachments are now part of the repertoire of every self-respecting manufacturer. Good digital examples exist, particularly Pulsar’s F455 model, but the majority are rear-mounted, sensibly letting the day-scope do the major acquisition and alignment operations before processing the transmitted light to produce a workable, and video-able, image.

With thermal, however, rear-mounting is not an option, as regular glass/scope lenses block the wavelengths that thermal sensors need to produce an image. Consequently, front-mounting is the only way to access the flexibility add-ons deliver. It brings advantages, too, with no adjustment to the shooter’s hold or head position required, plus no recoil-related concerns over eye relief. Moreover, freed from the constraints of a day scope’s eye-box, a clip-on’s designer can prioritise performance over compactness.

Historically, clip-ons provoked anxieties regarding zero-shift caused by inconsistent alignment that were hard for manufacturers to dispel. Today, improvements in optical design and precision manufacturing have made this a thing of the past, radically simplifying the alignment process along the way. More on this later.

This one or that one

Pulsar currently offers two thermal clip-ons: the Krypton FXG50 and the Proton FXQ30. I reviewed the former a couple of years ago and liked it so much that I took a deep breath, bit the bullet of its £4K price tag, and now take it for granted that I can make any of my hunting rigs thermally capable in seconds. When Pulsar followed up with the sub-£2K Proton, I was naturally itching to find out how good it was. And now I know. Spoiler alert: performance-wise the Krypton aces the Proton across the board – no surprises there - but if you take most of your quarry at under 100m, the principal difference between the two units will be measured in image quality, not bag-size.

The Proton possesses several ergonomic and aesthetic advantages. Most obviously, it is considerably smaller (by 24 x 35 x 1mm) and lighter (by 150-grams). Secondly, the Proton has the latest Axion-style body, rather than the legacy housing the Krypton shares with the F455, though both are made from the same lightweight magnesium alloy. Thirdly, it has a better control interface, with just 2 buttons (POWER: on/standby/off and RECORD: photo/video/record/pause/stop), plus Pulsar’s multi-function scroll-andclick dial for quick brightness/contrast adjustment and to take you through the menus. Finally, you get a full suite of 8 colour palettes, to suit all conditions and uses, whereas the Krypton offers only white-hot and black-hot.

All the controls are located together on the lower left-hand side of the unit, where in principle they can be operated by the shooter’s forward hand. In practice, however, I found this awkward (both left and right-handed) preferring to use the included Bluetooth remote control, which puts all the device’s functions at your fingertips, wherever they may be. Because the remote works with all Pulsar’s weapon sights, it also gives you a universal interface, maximising speed and minimising mistakes, regardless of which unit you’re running. Making it ideal for reviewers and serial purchasers alike!

One control absent on the Proton is a focusing dial. Initially, I regarded Pulsar’s choice of a fixed-focus 30mm lens as the Proton’s ‘Achilles Heel’. I’ve rarely tested, and never owned, a fixed-focus thermal, so I kept instinctively reaching for the non-existent focus control to optimise the image, and being frustrated when I couldn’t find it. Also, knowing that the Proton’s sweet spot was at 70m, I reckoned it would be OK for calling-in foxes and for rimfire rabbiting, but not ideal for shorter and longer-range work. As the test period progressed, however, I found it more versatile than anticipated, became less concerned by the lack of adjustment and even came to appreciate having one less thing to fiddle with!

Nevertheless, it is clear that the fixed-focus lens belongs to a design brief shaped around maximising the Proton’s attractive price advantage over the Krypton (as well as a performance differential that favours the Krypton). Consequently, a degree of cost-trimming is apparent elsewhere, as the package doesn’t include either a spare battery or a charging dock.

This brings us to power. Like their new Axion XQ monocular, the Proton uses Pulsar’s latest compact-but-capacious (4,900 mAh) rechargeable APS5 battery. This gives an impressive 6-hour run-time but lacks backwards compatibility with the APS2/APS3 batteries used in the Thermion and Digex series and other Axion models. Absent a charging dock, the battery is topped-up in situ by uncovering the USB-C port on the right-hand side and plugging in the supplied cable.

The port also supports external power banks, which will charge a battery while powering the device, and keep it running while you hot-swap APS5s. Unusually, the AP5 requires a separate clip-on cap to lock it into the battery compartment, so you’ll need to add these to your basket if buying additional batteries. The grip surface on the cap is minimal, so a battery swap is probably a gloves-off moment.

The Proton is compatible with Pulsar’s 5x30 optical monocular and can be purchased with it as the Proton XQ30. It’s a nice item, but the 5x magnification is overpowered for the high-resolution Krypton and doubly so for the lowerresolution Proton, masking much of the image and leaving the rest blocky. Personally, I found it more informative to look directly at the Proton’s small, unmagnified but always sharply-focused display. As for compatibility with dayscopes, Pulsar advises a maximum of 4x, but 3x is preferable and 2.5x would be perfect.

To fit the Proton to your day scope you will need to buy a suitable PSP Ring Adapter. Three sizes (42/50/56) are available to fit scopes with objective bell diameters from 45.5-65.6mm. Each adapter comes with a set of numbered polymer bushings and is itself adjustable for tension, making it easy to achieve the perfect fit, provided there’s at least 7mm of clearance between scope and barrel.

Set up the ring adapter first, using the cam lever to lock it to the objective bell with the lever at 3 o’clock. Then, loosen the adapter interface screws, screw the Proton into the front of the ring as far as it will go, back it out to vertical (battery uppermost) and lightly tighten the screws so it is supported but can still pivot. Now, switch on the device, push the dial to reveal the main menu, centre the menu in the scope’s reticle, nip up the adapter screws (6.5-7.5 Nm) to maintain the alignment, and you’re done!

To fit the proton to another scope that’s compatible with the same ring adapter, simply insert the correct bushing and install, tweaking the screen alignment if desired. Clever lens geometry means alignment doesn’t affect point-of-impact, merely which part of the screen you see, since the scope’s narrower field-of-view masks much of the display, except at very low magnifications.

Before taking the Proton hunting, I wanted to be confident there was no point of impact (POI) shift after mounting the device. An initial comparison of two 5-shot groups shot at 25m with and without the Proton fitted did show a small offset. So, I entered the calibration screen (via a long press of the control knob) and quickly dialled out the error, confirming this via a further group of alternate ‘with’ and ‘without’ shots that showed perfect consistency between the two conditions. I went on to shoot groups with the Proton canted at 45 and then 315º and experienced no POI shift there either, and this remained true even when switching the device between rifles. At longer ranges, the Proton groups opened up more rapidly due to resolution limitations but remained centred on the point of aim (POA).

A key benefit of an add-on like the Proton is that you can use it as a handheld spotter to cover a wide arc, then instantly fit it to your scope once you have identified a target. Target ID was no problem on treetop squirrels or farmyard rats, but differentiating between foxes, badgers and muntjac required a bit more patience in observing their movements, unless something was running into a call.

So, do I wish I’d waited for the Proton before buying my Krypton? No. Because the Krypton’s bigger lens and sensor make all the difference when it comes to longer-range results. That said, the Proton is undeniably smaller, lighter and better-looking, with multiple palettes and updated connectivity. Plus, it’s literally half the price! And, if you keep ranges sensible, practice properly prior to hunting and hunt responsibly, it has what it takes to deliver some very satisfying sorties.