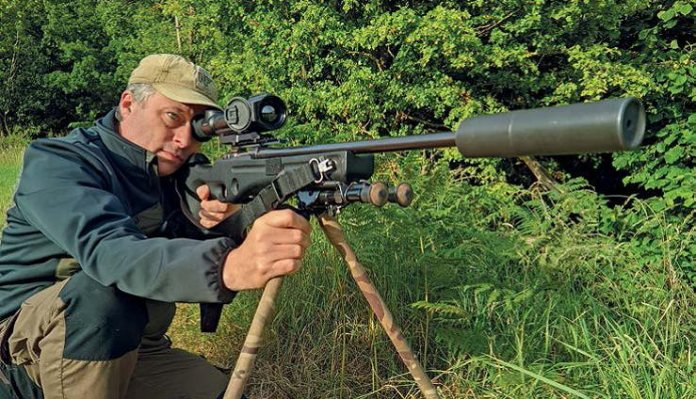 A couple of years ago, Pulsar launched the Thermion series, radically changing the image of thermal riflescopes in the process. A world away from the boxy Trail and Apex units that preceded them, the Thermions had the sleek lines of traditional day scopes. As well as making them look ‘just right’ on sporting rifles, those lines - which included a 30mm main tube - made them compatible with the full range of dayscope mounting options. Additionally, the design ingeniously repurposed the external features of a conventional scope to deliver all the internal functions required of its thermal counterpart.

So why have Pulsar just released a thermal riflescope called the Talion that looks, erm, like a thermal scope, and doesn’t use regular 30mm mounts Let’s see if I can answer those questions here.

Firstly, the looks. The problem with making something look like something else is that it prevents the form from following function. Visual criteria impinge on practical ones. Things can’t be made simply to perform. It’s not that looks don’t matter. They obviously do. The Thermions look great, and their familiar looks have undoubtedly accelerated the acceptance of thermal riflescopes among shooters. But, if you’re one of those people who prefers things to be simply what they are, then the Talion should be right up your street, because leaving behind the constraints of the day-scope layout delivers dividends in weight, dimensions and overall ergonomics.

Time for a top-to-tail look at the Talion and how it differs from its Thermion stablemates. The obvious change is the absence of a central, triple-turreted saddle. Instead, the Talion broadens only at the ocular and objective bells, the straight mid-section being dedicated to the battery compartment.

This has a unique design, as it locks /unlocks via a rotary collar at the rear, and hinges upwards to allow you to drop the compact-but-capacious, APS5 battery into the semi-cylindrical cover. Just like a 12-gauge shell into the chamber of a break-action shotgun! This is easy in the pitch dark, too, thanks to a tactile rib-and groove interface between the battery and cover. Once, installed, the rechargeable lithium-ion cell will power the scope for an ample 9 hours.

Having a single battery naturally means you have to switch it off before swapping cells, but if you need to keep the scope running continuously, just plug an external 5V or 9V power source into the USB-C port behind the objective bell, and charge the battery as you go. Pulsar’s latest Axion monoculars use the same APS5 battery, too, which is handy if you own both devices and find yourself with a flat in the field. The Talion also ships with a dual charging dock, making it even more practical to keep a spare battery (£39.95) in reserve.

At the rear, as per the Thermions, the Talion’s ocular bell is equipped with a fast-focus dioptre ring and a detachable rubber eye-cup that attaches seamlessly to the scope via rare-earth magnets. Yet, whereas the Thermion distributes its control functions between a 3-button panel on top of the ocular bell and a dial control on its L /H turret, the Talion frames its control buttons within a horizontal dial that gives super-fast access to the full range of functions. This also puts all the controls within easy reach of your strong hand: left or right. In short, it’s the neatest control interface Pulsar has ever devised.

That’s true at the front end, too, where the prominent thumb tab or ‘fin’ on the parallax-adjustment ring that focuses the target image is paired with a matching tab on the body of the objective bell. Line them up and the scope is focused at 70m, which is a sweet spot for thermal shooting, where optimal visibility and precision coincide. Genius! When calling in a fox, therefore, you can simply align the fins, wait for your quarry to come into focus, and then take the shot at a known range.

As you can also focus the Talion down to 5m and out to infinity, aligning the fins also provides a neat general-purpose benchmark. Being able to push /pull on the fixed fin makes operating the focus that bit easier, too. As does the fact that the Talion’s thermal-specific design allows for a more compact build, reducing the reach to the focusing ring by almost 7cm compared to the Thermion XQ38. Finally, the power button is neatly incorporated into the rear fin, keeping it safe from accidental activation, saving space within the main housing and complementing the ambidexterity of the Talion’s overall design. Full marks for ergonomics, then.

Perfect, too, is the Thermion-style objective lens cover, which can be positioned with the hinge on either the left or right-hand side, clicks securely into place when closed, folds back flat against the objective bell when fully open and doesn’t flap about in-between.

Mount up and zero

For some, though, the ‘elephant in the room’ will be the need to use Pulsar’s dedicated mount. A full-length ‘Weaver U’model is supplied as standard or you can upgrade to the USQD (£112.95) quickdetach version, or (once available) to a short LQD unit, which features a single cam lever with a locking tab and is ideal for AR15-style rifles. The mount allows for the scope to be attached in a range of positions so as to give you the best possible eye relief.

Once you’ve figured this out, however, you’ll need to break out the Loctite, apply some to each of the connecting bolts, add 4 Nm of torque and leave everything to set, so as to ensure a rock-solid zero. Also configurable is the cross-bar /recoil-stop in the underside of the mount, which can be unscrewed and inverted to give a perfect fit with the slots in either a Weaver (narrower) or Picatinny (broader) rail.

With the scope firmly attached to the mount, and securely mounted to your rifle (which will require a properly fitted Picatinny or Weaver-style rail, or suitable Picatinny adapters attached to a dovetail rail), you’re ready to sort out your zero.

This is as per other Pulsar scopes. You can configure up to 10 settings in as many as 5 rifle profiles, so you can set up 50, 100 and 150m zero points for your foxing rifle with settings to spare. Plus program calibre-appropriate equivalents for your stalking rifle, rimfire and airgun. Sensibly, the selected setting is always visible in the information bar at the bottom of the display, and toggling between distance settings is super-quick, whereas switching between profiles rightly takes a couple of extra steps.

With the Talion on my .204 Ruger, I began by bore-sighting the rifle at 50m, using a large backer with a Thermbright reflective patch in the centre (a 2.5cm square of tinfoil works well too), angled upwards a little to reflect the sky. Then, I checked that both the display and the target were perfectly focused, before adjusting the colour, brightness and contrast settings to optimise target definition. Finally, I selected my favourite reticle (D50i) from the 10 on offer, picked one of 9 colour permutations, and adjusted its brightness for maximum visibility.

This is the moment to settle in, take your time and make your best shot. Having done so, note the offset from the point of aim, open up the menu, enter zeroing mode, zoom in, centre the target in the reticle and take a ‘freeze frame’ snapshot. This gives you a fixed image that lets you move a secondary crosshair onto the point of impact by toggling the X and Y axes - something the dial controller makes super-easy. Alternatively, knowing the click value at minimum magnification is 17mm @ 100m, you can do some quick sums and enter the exact numerical adjustment required. A confirmatory shot will typically hit dead-centre. I managed to set up my 3 zero points in just 10 shots (at 150m I went for a go-around and a 3-shot confirmatory group). The scope held zero perfectly through the test, too, even when switched between rifles (Loctite and well-fitted rails are a must!)

Out foxing, I felt that 150m was my comfortable limit, as the animal was pixelated, but not to a degree that prevented shot placement. 10x came in useful at times, but mostly I ran the Talion at the minimum 2.5x, stepping up to 5x to confirm and shoot. Even though I’m used to the 640x480 format, at typical engagement ranges I didn’t feel overly constrained by the smaller, 384x288 sensor in the Talion, plus the 1024x768 AMOLED display is just as sharp and vibrant here as on more expensive Pulsar models.

Final thoughts. Comparing specifications with the Thermion XQ38 gives the latter a marginal advantage in FOV and adjustment range, but the Talion romps home on size, weight, run-time, connectivity and wifi speed. However, by offering a full £700 saving and with a price tag comfortably under £2K, it’s the economics that truly impress. In short, you’d have to be seriously wedded to the Thermion’s looks - and those 30mm rings - not to recognise the Talion as the best-value thermal scope available now.