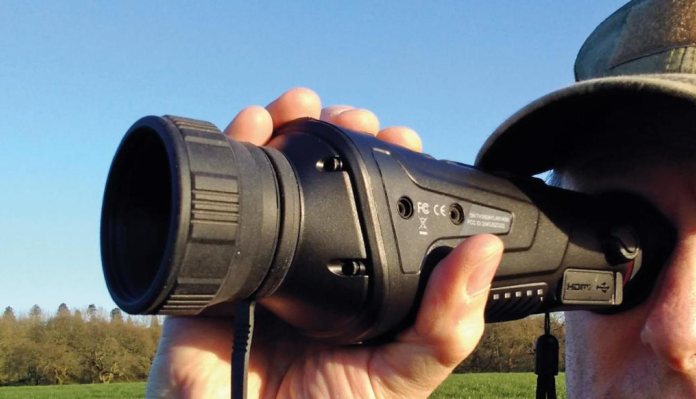 Guide Infrared are a major presence in industrial thermal imaging and were pioneers in making consumeroriented devices for hunters, albeit their star was soon eclipsed by Pulsar’s domination of the market. Yet with demand for thermal currently outstripping even a ramped-up Pulsar’s capacity to meet it, Guide, and distributors Thomas Jacks, have stepped up to the plate with a brand new range of monoculars, bi-oculars and weapon sights.

Not one but two

As an opener, Thomas Jacks kindly sent me both the standard and Pro variants of Guide’s TrackIR-35 monocular. The former has a solid specification, with a 35mm f1.2 objective lens, a 400x300 @ 17μm vanadium oxide (Vox) sensor, a base magnification of 2.3X, a FOV of 11.1°×8.3° and a 4X smooth digital zoom. That 300x400 sensor is bigger than the 384x288 specification on most manufacturers’ standard models, but if this makes a difference, I confess I couldn’t see it. The Pro model, meanwhile, boasts a truly top-end 640×480 @ 12μm Vox sensor. Teamed with a 35mm f1.0 lens, this gives a lower base magnification of 2X and a wider FOV of 12.5°×9.4°. There’s twice as much digital zoom, too (8X). As you would expect, the image from the standard model is nothing to complain about, but the Pro is in a different league, delivering an image comparable to the top-end Pulsars.

Both units use the same body, but the Pro’s lens is considerably larger externally than the standard model’s, though both are equipped with a protective rubber buffer. The rubber is ribbed for grip, and it needs to be because lens movement is quite stiff. This makes it harder to achieve a fine focus, but is ultimately a good thing, because once you’ve set the focus for the far side of a field, say, you can be sure the scene will still be sharp every time you put the unit to your eye.

Ocular lens focus is via a dial at the rear left of the body and is agreeably hassle-free. Just twist it until the screen icons are crisp, and you’re done. This is a nice change from my old Pulsar Helion, where keeping the dioptre ring where I want it requires a couple of turns of electrician’s tape. The Guide’s soft rubber eye-cup is comfortable, too, but its symmetrical design means it’s not really perfect for either eye, and it was also prone to coming away when snagged, so you may need that tape after all! Also readily dislodged was the Pro’s rubber lens cover, but at least it’s tethered, so you can’t lose it.

Inside the eye-piece, the 1280×960, 0.4”, colour LCOS display feels large and sharp. Guide liken it to watching a 22” screen at 1m and I wouldn’t disagree. The perceived size of the display lets you make good use of the picture-in-picture function, which boosts the central part of the image by 2X.

Unusually, the PiP window can be assigned to the upper left, right or centre of the screen. With the eye-piece focused, menu items are crisp and clear, but I’d rather their intensity was independently controllable instead of tied to the screen brightness setting.

The body of the monocular is ambidextrous, but - aside from a smart red metallic ring at the rear - it’s not particularly distinctive as it shows the common FLIR-style tear-drop profile. You would think this would be ergonomic, concentrating the weight at the widest part of the unit near the lens.

Nevertheless, the unit really only settles into your palm if you cock your wrist right back. Moreover, concentrating the weight at the front means that at least three of the five control buttons are well behind the fulcrum and stretching to press them causes the unit to tip.

No big deal, perhaps, but this effect was naturally greatest when using the rearmost button, to which the camera functions are assigned. Consequently, still images suffered from motion blur unless the monocular was supported with both hands. This was obviously not a problem in video-capture mode, but I would have like to see a pause function integrated between the start and stop actions, so as to be able to record the interesting bits of an encounter to a single file instead of ending up with dozens of brief individual snippets.

The images are stored in JPG (still) and MP4 (video) formats on a built-in 16Gb memory card and can be accessed via USB or a WiFi connection to a dedicated smartphone app. The app itself is basic but functional, permits remote viewing and control if you want them, plus is available in both IOS and Android flavours.

Moving forward from the camera button, we come to the ‘DOWN’, ‘MENU/ ENTER’ and ‘UP’ buttons. All the buttons are rubberised, a good size, and easy to tell apart by touch, resulting in few control errors. As usual, the buttons offer both long and short-press inputs and for the most part, these are intelligently mapped to maximise access to the functions you want most often. Nevertheless, the brightness and contrast settings aren’t on quickaccess, requiring you to enter the menu to set them. This doesn’t take long but makes tuning the image in sub-optimal conditions a bit more involved.

A brisker approach to image optimisation is to scroll through the 3 quick-access profile settings dubbed ‘nature’, ‘highlight’ and ‘enhanced’. The ‘nature’ profile gives an image that is low on contrast but brings out all the nuances of tone available. ‘Highlight’seems to use this as a base image, but boosts the warmest areas into high contrast. Finally, in the ‘enhanced’ profile the whole scene shows in high contrast.

I used ‘nature’ as my default profile, since I found it easier on the eye, but switched to ‘highlight’ periodically, to check for any heat sources I may have missed, or to track confirmed sources better. However, if weather conditions worsened, or the terrain was unusually cluttered or featureless, I selected ‘enhanced’ to compensate for this.

Changing colour palettes can be useful too. Both the TrackIRs offer white-hot, black-hot, red-hot, iron and blue modes, whilst on the Pro model the red-hot mode is labelled as ‘adjustable’ in 10% increments. Unfortunately, it wasn’t clear in the menus or the manual how to set the red-hot level, and the standard-setting tended to highlight more of the image than was useful.

Nearest the lens is the ‘power’ button. Activation takes a long, firm press and is confirmed by a green LED near the eyepiece. Start-up is quite slow (around 17 seconds from first press to image), so it’s good that there’s a standby function, and that return from standby is almost instantaneous. Also nice is the fact that you can set an automatic shutdown time to avoid draining the battery if you accidentally leave the unit on. Additionally, there’s a ‘super energy-saving’ quickaccess option that simultaneously reduces the screen brightness to 30% and deactivates the WiFi.

Power comes from a pair of built-in 18650, 6000mAh Li-ion cells charged via a USB-C socket tucked away alongside a Micro HDMI socket behind a rubber port cover. The cover is a little fiddly to open but stays put when closed, which is more important. I prefer clip-in to built-in batteries, as they’re user-replaceable if they fail, but both units gave the advertised 4-5 hours of run-time. This can be extended by using the standby function or simply hooking up an external power bank to the USB socket. The aforementioned LED shows red when charging and green when charged, plus, for greater stealth, you can switch it off via an option in the menu.

Overall, these Guide monoculars give you all the features thermal users have come to expect, even if their presentation isn’t quite as slick or stylish as Pulsar’s. The Guides’ NETD figure of ≥50 also lags a bit behind the equivalent Pulsar offerings (≥40 / ≥25) but this was no evident handicap to orientation, detection or identification. Thus, the standard TrackIR35 is a solid performer, whilst the Pro version is as impressive as its specification suggests. The form factor will be a matter of taste. For example, I like the eye-piece focus and button design, but not the balance of the tapered housing, which also felt bulkier than my boxy Pulsar Helion. All that said, if bang for your buck is what ultimately counts, then specificationfor- specification both the TrackIR-35s are attractive propositions at their respective levels and well worth considering. Plus, they are backed up by a 2-year manufacturer’s warranty and expert distributor support from Thomas Jacks.