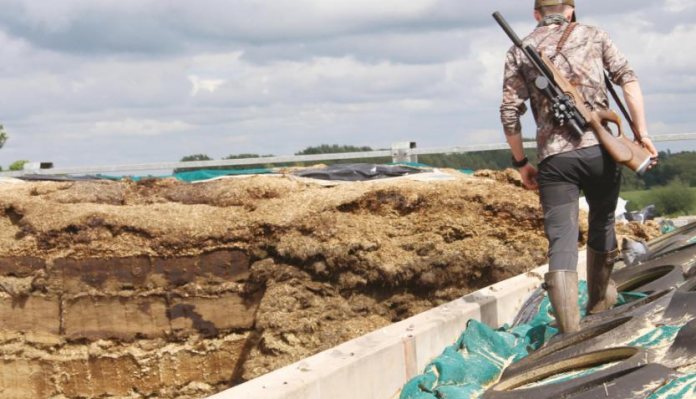 Another Sunday and another trip out for me and Tom. We were heading to a location that we had visited a few times before, so had a fair idea of what to expect. Our destination was a farm that, for some reason, had a larger than normal amount of pest birds than the average permission. I am led to believe that feral pigeons and doves in the local area soon realised that food and shelter are far easier to come by a mile down the road on the dairy farm. Understandably they stay and make nests in the roof, eat the cattle feed and defecate everywhere. When we make the trip to the farm, it’s always worth it. We haven’t yet shot less than 30 pigeons in an outing, which is on average a lot more than any other permission. Not only is the farm rife with pigeons but also corvids. Again, I don’t know why, but there is a high population of crows, rooks and jackdaws here. When it’s time to feed calves, the sky turns black.

When we arrived, we headed straight to the sheds, knowing that the number of corvids would grow when feeding time comes. Before we had even entered, we could see activity on the roof, indicating that the rafters could be crammed with pigeons on the inside. We made our way to the gate of the shed and set the gun on top, it was the perfect height to angle it up into the shed. I am a great fan of making shots as easy as possible. We went for the close birds first and then moved back further inside, as the near ones dropped or were spooked.

I was using my tried and trusted HW100KT in .177 with Hawke Airmax scope. This gun is now my ever-present pest control machine. I just love the balance, compactness, 14-shot magazine and above all, the accuracy. Tom was using his BSA Super 10 .177 with an MTC Viper Connect on top. The close observers will notice him using my HW100. When making these articles there are occasions when it’s not practical to take the photos till sometime after the kill. I often treat it as a separate exercise, to avoiding running the risk of spooking the target, being distracted from the task at hand, not performing a clean kill and missing opportunities. By the time we came to the photography, Tom’s gun was put away, hence posing with my 100.

The first birds were almost directly above us, which increased the chance of the pellet being deflected off the girder and putting an unwelcome hole in the roof. We decided to go for heart and lung shots, the energy at this range would be ample to get the job done cleanly and the extra meat would absorb most of the power from the pellet. Even if it did pass through, its remaining velocity would be unlikely to cause any building damage. I counted down from 3 down to 1; on one, we fired. There were two definite thuds and two birds dropped. The rest shuffled around a little but remained undisturbed, perhaps confused about what was going on. We cycled the guns and lined up once again. Two more bids fell almost at our feet and the day was off to a good start.

A JCB cranked up behind us, which we thought may spook some of the birds, but thankfully they just sat there, like they had seen it all before. The vehicle came into the shed though and began scrapping out the muck. We didn’t want to get in anyone’s way, so decided to go for a quick wander while they worked. I soon spotted a wood pigeon sat on top of the silage staked opposite the shed. It was a fair distance away and a stalk would be pointless with no cover between me and the bird. I was confident, as I have a lot more experience with 45 yard + shots. I used one of the many available rests and looked down the scope at the pigeon. It wasn’t feeding at the time. It was perched, seemingly without a care in the world. I held 2 Mil-Dots above its head and waited for what little breeze there was to drop away. As soon as I was comfy, I took the shot. I watched the pellet sail through the air, before arching down and connecting with the woody’s head. It flapped around for a while before coming to rest. I observed down through the scope, gun already re-loaded, in case a follow up shot was needed.

We broke cover and I climbed up to retrieve the bird, we always clean up after ourselves. Most of the bodies we shoot go to friends with birds of prey or ferrets, so nothing goes to waste. By the time we had picked the woody and walked a bit further, the JCB had done its job and we could once again return into the shed. We walked in and managed to bag a few more, with Tom making some impressive longer shots of his own, on birds down the far end of the shed.

From where we were, I could see some crows sat on top of some cables running along the field on the far side of the shed. If I could get over to the gate at the far end, I’d be in range for a shot. I used the cows as cover, crouching as low as I could. I figured that due to the light difference, it would be difficult for the corvids to see inside the shed. It was much darker in here, so I had a clear advantage; nevertheless, crows have exceptional eyesight and can spot something dodgy a mile away, so I took every precaution. I was soon up against the far wall, but the hardest part was still to come; getting into a decent position.

Slowly I raised the rifle to my shoulder whilst still being in cover. I tried to make my movements completely out of sight. With my gun now ready, I edged my way round the concrete wall to get a clear line of sight to my quarry. The gate was too high for me to rest on, so I just leaned up against the wall, to get maximum support available. The target crow was 40 yards away, so I held 1 mil-dot above its head and began squeezing the trigger. The pellet struck its head and it fell backwards, holding on to the line for a few seconds before dropping to the ground. Just then, it seemed like all the corvids in the area began a burst of squawking.

A jackdaw landed in a similar place to where the crow was shot and curiously looked down. The side-lever had already been cycled and was ready for another shot. The same holdover was given but this time I went for a heart and lung. Jackdaws are a much smaller bird than the crow, so take less dropping. I fired and sent the pellet just left. It looked like there was some wind out there that had just got up. I prepared for another shot and adjusted my aim accordingly. The bird sat where it was, still transfixed on the dead crow, the everyday sounds of the farm yard must have masked the sound of the shot. This time, there was no mistake and it joined the crow in the grass.

Tom and I had another little walk around and picked up what we shot at the end of the day. He had a great spot of a rook feeding down by the calves. He would need to make his way out of the shed and round to the silage pit to get a safe shot. The ground was stone chippings, so the chance of a ricochet was too high from where we were. It was easy to get into a better spot, we just had to be sensible and quiet about it. While we were moving, so was the rook, it was wandering around, finding bits of grain and silage to eat. This could have been awkward. It would be just our luck to get into a great position only to have the bird move.

When we did get into a shootable location, the rook had walked over to a soft piece of dirt. This was great! It meant that the likelihood of a ricochet was drastically minimised. Tom was also shooting down onto the bird and he decided that prone would be the best position to take the shot. He made a fist and rested the gun on top and waited for it to be as still as possible before taking the shot and dropping it cleanly.

It was a great way to spend a Sunday and we will most certainly have many more like it. The farmer was happy and said we were welcome any time. We finished with three different corvids and a good few pigeons but the open invitation to return is always the very best thing to leave with.