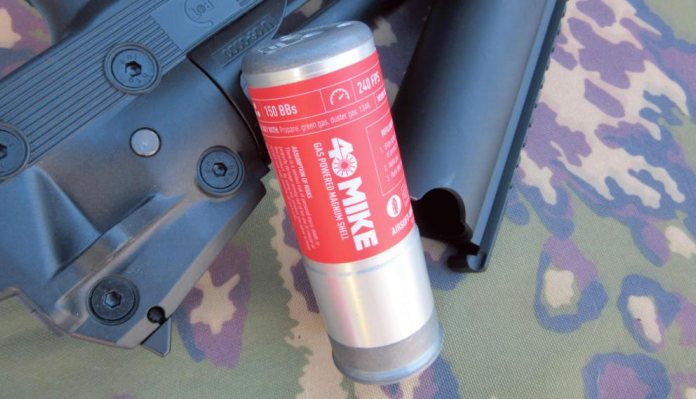 During IWA 2018 I was introduced to a fabulous piece of engineering from Airsoft Innovations in the form of the ‘40 MIKE’ gas shell. Designed to replace MOSCARTS and similar gas-powered ‘shower shells’, the 40 MIKE was touted as “the MOST POWERFUL 40mm gas shell ever made!”

Featuring an unparalleled 100ft range, 150BB capacity, and firing every shot at 240fps using the Airsoft Innovations patented Quantum Drive Technology the 40 MIKE offered the highest energy output ever seen in a 40mm gas shell. In the words of Airsoft Innovations themselves, the 40 MIKE “fires 150 BBs in 1/3 of a second and hits with so much energy that we guarantee they’ll call their hits!”

They also went on to say: “hit ‘em hard and hit ‘em 150 times. The 40 Mike is easy to load and easy to fire, so you can put the maximum number of BBs downrange”, and herein lies the controversy.

In principle, the 40 MIKE works just like existing gas-powered ‘shower shells’ that you’d fire from a grenade launcher like an M79 or M203, and it even looks like one. You fill it with 150 BBs, gas up, pop it into your grenade launcher and BOOM! Unlike traditional shells, though, the 40 MIKE’ has 240fps worth of ‘boom’ and the BBs all impact at almost the exact same spot at close range!

Now, in fairness, there’s an advisory on the shell itself that advises a ‘minimum engagement distance of 30 feet’, and the big concern for many who saw the show demo at a much closer range than that was the possibility of all those BBs hitting and potentially lifting eye protection away from a player’s face, whilst still more BBs would continue to impact the same area.

Immediately at the Meetup I heard fellow airsoft writers and even retailers saying “that will NEVER be allowed on sites”; initially I was one of the nay-sayers because of safety concerns, and that’s why I’m only now bringing my findings in to land; this product needed considerable testing and evaluation before I would get behind it!

After nearly a year of rigorous rangetesting, with different gases and different weight BBs, I’m finally going to come out and say that this is an absolutely awesome product, not just in terms of performance, but equally in terms of the engineering prowess behind it! It’s been filled and fired over and over again (my log show that it’s now been fired 70 times) and still it’s performing; if you put this into perspective with many shower shells’, this is simply stunning performance!

In terms of use, I have fired it directly at a mannequin head equipped with different styles of ‘eyepro’ at the minimum engagement distance of 30 feet and, although some BBs do impact the same spot, even the slightest twitch when firing will cause them to deviate from this point. Throughout testing, I could occasionally dislodge a pair of shooting glasses, but not knock them off completely. As the majority of players wear full-seal goggles, backed up by lower- face protection these days, I believe that my safety concerns have been alleviated.

Of course, there is always the possibility that the shell could be inadvertently triggered inside the ‘minimum engagement distance’ but this is down to site management and ensuring that players using the 40 MIKE are aware of their responsibilities; this is done utterly safely with certain types of pyrotechnic device and I see no reason why, properly managed, the ‘40 MIKE’ should be any different.

After much debate, I am going to come down on the “hells yeah” side of the 40 MIKE; used sensibly, it’s a tremendous tool, and certainly adds some added ‘oomph’ to your airsoft armoury!

For more information on the 40 MIKE, please do visit airsoft-innovations.com, and my thanks go to fire-support.co.uk for the long-term loan of the test shell.