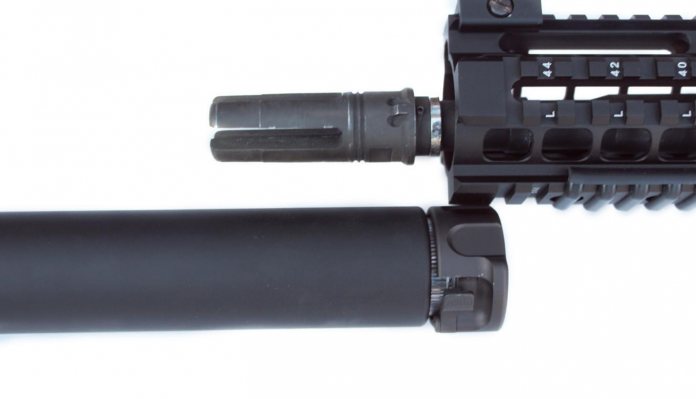 Angry Gun Airsoft was established in 2012, and they are very wellrespected for their high-quality airsoft accessories. They specialise in highly detailed replicas for airsoft use, offering a range of model specific rail systems, ‘Power Up’ suppressors, flash hiders, and first-rate gas blowback upgrade parts. I first became aware of them a couple of years ago when I was working on an MP7 GBB project, as they were one of the few companies that offered a really good suppressor for it, and when I received it, the quality was spot-on.

I’ve recently been working on two new custom builds that are very specific in what suppressor they need to accurately mimic their real world counterparts, so I was overjoyed when I saw the very thing I required appear on the Ehobby Asia website. Two new suppressor models from Angry Gun; the short ‘SOCOM 556’ and the longer ‘SOCOM 762’ appeared to be very accurate replicas of the real-world suppressors currently used by both UK and US ‘Special Forces’.

With my builds in mind, I ordered in one of each length, and a couple of weeks later a package duly arrived from the Far East. When I unpacked the unassuming brown cardboard boxes, I was delighted to discover what lay within, as both dummy cans were of absolutely outstanding quality. They are available in two lengths in either black or tan, and what I received were two matte black, full metal suppressors with grey attachment rings and grey CCW four prong flash hiders. The shorter ‘556’ model is 157mm long and weighs in at just 369g, whilst the ‘762’ is 212mm and weighs 437g, so neither are going to add much weight overall to your RIF.

What is so exciting about these new models from Angry Gun though is the quick-detach mechanism itself, as it’s the closest to the real deal that I’ve ever come across! Once you have the flash hider installed on your rifle or carbine, the suppressor itself mates with a small lug tucked away on the underside of the hider, with a corresponding slot inside the collar of the can. Just like the real thing there is a lever on the suppressor that simply says ‘PUSH’, and once depressed, you can tighten it (with the suppressor facing away from you) to the right attaching it solidly to the flash hider, thanks to a very clever ratchet collar ‘iris’ system; conversely, to remove it, you depress the lever once again and turning the suppressor to the left opens the iris, so that you can remove it.

Now as you can imagine this level of authenticity doesn’t come cheap; from the Far East the ‘556’ will cost you US $76.50 and the ‘762’ US $83.00, or iro £53.00 and £58.00 respectively. A number of UK stores, such as Redwolf, have been carrying Angry Gun products recently, so I’m certain that they will be eyeing these excellent suppressors up; for now if you’re interested in finding out more about what Angry Gun do then simply head on over to their Facebook page!