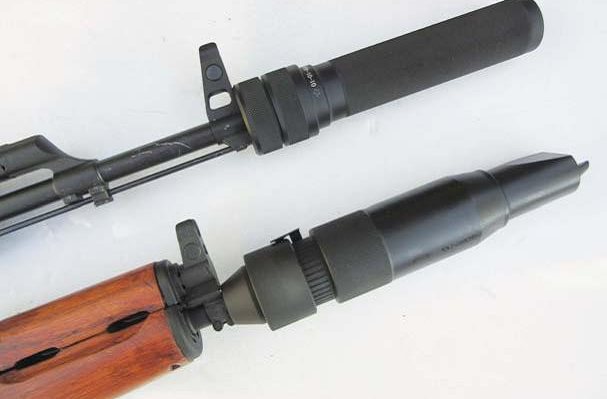 It may seem strange but when you start researching an article or review usually referring to old books, technical journals or specialist websites will give you the factual information required; recently I reviewed the ASG PS0-1 sight that I have on my airsoft Dragunov, and there are entire websites devoted to Russian optics, which are both informative and entertaining in equal measure.

Quite recently, after doing further research into what accessories were used with the AKM/S and the AKS 74U, I decided to hunt out the period correct suppressors for both models, and Dave’s Custom Airsoft Ltd were able to supply me with the PBS-1 and a PBS-4 models that I needed. Both replica suppressors are beautifully reproduced by Apple Airsoft in Taiwan, both full metal, and both highly detailed.

Now these days I can tell you the difference between an AK pistol grip that came from the Tula or Izhmash factories after talking to Jip at www.cold-war-collectables.co.uk. Once he’d given me a clue, then it was a matter of getting my research hat on and doing some more digging. When it came to the suppressors though, it was a different matter; even speaking to AK enthusiast friends and highly knowledgeable living historians there seems to be very little information on the PBS models, just a lot of guess-work based on pictorial evidence from the period in question.

What I was able to ascertain is that PBS stands for Pribor Beschumnoy Strelby or silent firing device. When the AKM/S came into service to replace the venerable AK47 it had the redesigned, slightly raised buttstock and pistol grip, along with the addition of a removable muzzle flip compensator. This spoon-like compensator was screwed onto the muzzle and utilised the muzzle blast to reduce climb during fully automatic fire. The compensator could be replaced by the screw-on PBS-1 suppressor. The PBS-1 was fitted with a rubber bullet wipe diaphragm at the end and a baffle stack to the muzzle.

This suppressor required special subsonic ammunition with heavier bullets to be used, which had the effect of reducing accuracy over distance; in one first hand report I found online it was also stated that with this ammunition you needed to change the suppressor’s diaphragm after just five rounds! Most commonly seen on the folding stock AKMS, but not exclusively so, the PBS-1 was a simple cylindrical design with a raised collar and knurled finish specifically for the 7.62x39mm cartridge.

The 5.45x39mm AKS-74U was popular among many users due to its compact size, which allowed it to be carried in helicopters and vehicles, and even concealed under clothes. However, its effective use of fire was greatly limited by poor accuracy at ranges beyond 150-200-metres, while the bullet itself remained lethal at much greater distances. A special version of the AKS-74U was developed for the Soviet Special Forces (Spetsnaz), which could be fitted with the quick-detach PBS-4 suppressor and a special 30mm silenced grenade launcher model, the BS-1 ‘Tishina’. The launcher used special HE-DP grenades, which were launched using small calibre blank cartridges stored in a box magazine in the launchers pistol grip.

The PBS-4 was very distinctive in shape as once again it needed to be able to act in the same way as the muzzle booster fitted to the SU; due to the extremely short barrel and conical end of the booster, the muzzle blast was extremely vicious and visible and the suppressor needed to deal with this, whilst at the same time reducing the sound signature. To this end, the PBS-4 featured two distinct chambers of different diameters, along with a spoon-like cutaway compensator slot similar to the design of that of the AKM/S, which would help deal with muzzle blast and reduce muzzle climb.

With all this information now in hand I was happy to fit the Apple Airsoft replica suppressors to my gassers. Both replicas are absolutely first rate, beautifully finished and feel ‘right’. Both are finished in a deep semi-gloss black that looks great with the barrels of the AKs, and both feature distinct knurling and a ‘collar’ so that either can be fitted to the AKM/S or the SU or to RIFs with either a CW or CCW outer barrel thread. Given that the AK/S74 is in the same calibre as the 74U it is possible that the PBS-4 could have been used with the rifle, although I’ve not found any evidence of this; but hey, this is airsoft we’re talking about. Both suppressors retail for £46.79 from www. davescustomairsoft.co.uk. If you have an airsoft AK variant then I will tell you that these lovely replicas really are the icing on the cake!