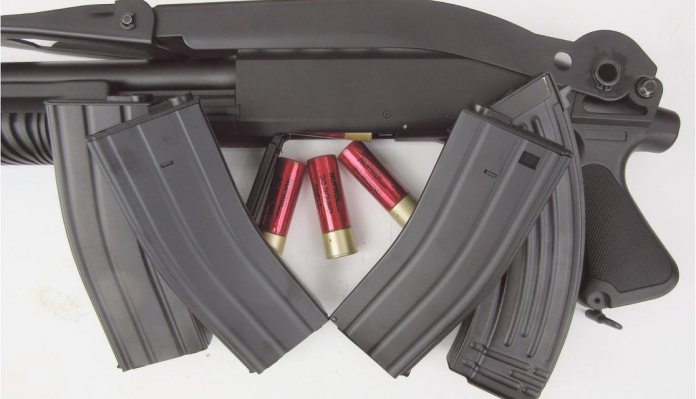 The team at NUPROL, even though they are good friends of mine, keep surprising me with their grasp on the airsoft market. They’ve rolled out some superb gear in the past few months and it just keeps on coming!

The latest development in their massive range of guns, gear and accessories is something that every single airsofter worldwide needs and that’s dependable, free-feeding magazines, and whatever your style of airsoft play, from full-speed skirmish to hardcore MilSim, NUPROL have what you need! To start the ball rolling they’ve concentrated on magazines for probably the most popular replica out there, the M4.

There are currently three full metal magazine “STANAG” style models in the range. The first is an out and out skirmish magazine, a baseplate winding 370 BB Hi Capacity (HiCap) that retails iro £12.50. The second model is a little more interesting in that its 330 BB ‘Flash’ mag; although it’s still a HiCap it’s a lot easier to operate than the old, wheeled design that’s been with us for years in that instead of winding that big old wheel round and round you simply drop the baseplate, pull down on the cord three or four times and your good to go! These are going for about fifteen quid.

The last of the M4 models though is probably my personal favourite as it’s a MilSimmers dream. It’s full metal like the others but it’s a clever bit of design in that you can easily change it from 140 BB capacity to 30 BB capacity! To do this you simply unscrew the baseplate, remove the inner cassette, and change the capacity setting. These are selling for about £13.50 and are incredibly versatile. Last but by no means least, if you’re an AK fan like me there is even a classic 500 BB AK Flash mag in the line-up; expect to pay iro £16.00 for one of these.

And shotgun users haven’t been left out either as the Essentials Shotgun 30rnd Shell Pack has been designed for use with 3BB burst shot shotguns and single shotguns. Tokyo Marui, Double Eagle, CYMA, and ASG shotgun models are all compatible. The shells are constructed entirely from a strong Polymer, and are finished with a shiny red label with NUPROL branding. The shells are easily loaded from the top, by using a standard speed loader. These are just £9.99 for a pack of four!

Having tried all the mags and the shells in my own RIFs I can tell you that they all fit well, feed perfectly, and are bomber tough. If you’re in the market for some new magazines then I’d seriously suggest you check out the new models from NUPROL at your earliest convenience.