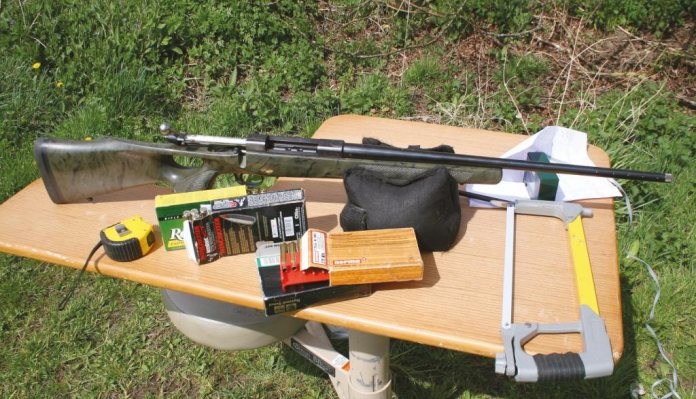 I have wanted to try this one for a while, as the .270 Winchester cartridge has been the darling of the Forestry Commission and one of those calibres that has come in and gone out of favour with shooter’s fickle ways, with what ammo is in vogue or not.

Common bullet weights for the .270 (actual .277 calibre) are 130 or 150-grains, but often the .270 was referred to as the ‘meat chopper’, due to the venison damage it imparted on deer carcasses. The 130-grainers were often too fast and explosive, certainly those of lighter construction, hence its reputation for being overly destructive on meat. Whereas the 150-grain was thought a bit too slow and compromised the high-speed performance, which is why people liked the .270 in the first place, as a flat shooting round.

Mind you, now with many good 140-grain bullets available, such as the Nosler Accu-Bond or Hornady SST, they now make the .270 a very good round, and if you like loading it with 100-grain bullets, you have a fast, flat foxing round. That in the right hands, and for that matter rifle, can really reach out with superior accuracy and of course what it’s famous for- power!

So why would I want to chop a 270 Win barrel, as surely that is defeating the main advantages of this hard-hitting flat shooting cartridge? Short barrels can often see velocity and energy levels dropping below the legal deer limits i.e. 2450 fps and 1750 ft/ lbs energy in Scotland with a 100-grain bullet for large species or .240 cal minimum and 1700 ft/lbs for deer in England and Wales. I have not included small species here obviously.

I managed to source an old Tikka M65 .270 rifle from R Macleod & Son of Tain, always a good source of second hand guns and optics. Also, and quite apt, this Tikka was an ex Forestry Commission rifle, so it had done the business over the years no doubt and would be ideal for my test regime. I choose four differing factory loads with 100,130,140 and 150-grain bullets to span the usable range and weight of projectiles. Then, as is my wont, tried reloads of the same range of weights, to see if I could improve the results.

Accuracy was no issue here, just ballistics, so I clamped the barrel in a portable vise I use to switch barrels on several rifles and then marked off from the muzzle in increments of one inch to cut. Thus, reducing the barrel from 22 to 16” to see the velocity/energy change with all factory and reloads as I cut the tube down to size. I cut the barrel using a standard hacksaw and deburred the muzzle to stop restriction of the passing bullets and then checked five bullets at each length for an average result over the chronograph.

First up, I was really surprised how efficient the .270 rounds were, I was expecting more velocity loss than I got. But that’s a good thing, it means reducing the barrel on this calibre is worthwhile if you want a shorter rifle overall, without too much velocity loss. You will also notice that some of the velocity results actually went up after reduction! This I have seen before and is caused by the barrel not being exactly the same tolerance internally along its entire length, i.e. tight and slack spots. Sometimes fouling or rust and pitting of the rifling will cause the same anomaly.

Usually, with the reloads, I am trying to make up for lost fps and thus energy figures to make the bullets become deer legal again, but here it seemed a bit superfluous, as despite the barrel reduction, all factory loads were deer legal. The best reload was in fact the 140-grain Nosler Accu Bond, using 51.5-grains of Vit N540 powder. Initial velocity at 22” was 2931 fps for 2671 ft/lbs, actually slower than the Winchester factory ammo. Similarly, at 16” barrel length, velocity reduction was minimal at -156 fps, so still producing 2775 fps for a healthy 2395ft/lbs energy. The 130 and 150-grain reloads, although showing a slightly higher velocity to start with, actually make no improvement over the equivalent bullet weight factory loads. I also use Quickload and Quicktarget from JMS Arms to predict a reload and now having chopped many a barrel I have found this ballistic program extremely accurate.

One major issue you must consider, is that as the barrel is reduced, the muzzle blast increases, as powder is burnt outside the barrel, to a point that it becomes ear splitting. Or to put it another way, the rifle turns into a flame thrower, as the powder burning outside the muzzle can create a massive flash.

However, this is no problem, as the reason you want to reduce the barrel in the first place is so that when you fit a sound moderator the overall length of the rifle/moderator outfit is not too long. Fitting a sound moderator will naturally reduce noise. Just remember, though, that the powder from a short barrel will make that sound moderator hot. That’s why with reloads you can use slightly faster burning powders per load, to burn more efficiently in a shorter barrel length.

Overall though, wow! what an efficient round the old .270 is! Actually, I am beginning to look at it again as an all-round performer, especially with those 140-grain Accu-Bond loads, with a shortened barrel and a sound moderator fitted.

But taking the opposite view, you could well ask why would you want to reduce the effectiveness of what is a high performance standard calibre? I have explained my view, but on speaking to Editor Pete Moore, who is a big fan of the 270 Winchester and of the opposite opinion, that calibres like 270 and similar need longer barrels than what seems to be these days the shorter industry standard. His view; if you don’t want the advantages of any calibre/barrel length combo, then don’t buy it! Buy something less powerful and don’t cut it down! His ammo choice is Winchester 130-grain Ballistic Silver Tip, which, through his standard 22.5” barrel on his Blaser R8, is generating a respectable 2970 fps and 2559 ft/lbs. It kills well and does no serious meat damage, but he’d like a 24” tube to get the most out of it!