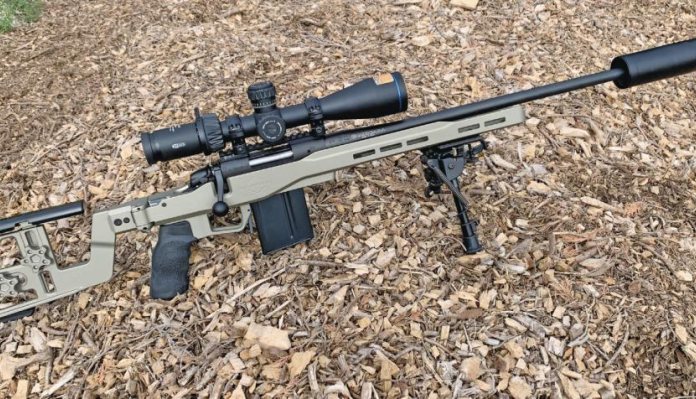 This chassis is the ARC 2.1 design from a Ukrainian company called Automatic, and it is inletted for a short-action Remington 700 (Savage 110 and Tikka T3x inlets also available). It is CNC-machined from 7075-T6 aluminium alloy and shows hard Anodic coatings (MIL-A-8625 Type III Class 1 & Class 2). The forend shows a massive free-float that can handle the biggest barrels and is M-LOK compatible. A Harris Bipod machine screw adaptor is included and there is also an interface underneath for their ARCA Rail and other accessories.

The build is solid and the action void is precisely machined with a deep recoil pocket that doesn’t need bedding. All the high-stress parts are Titanium: mag catch, butt hinge and locking lever. Feed is from AICS-type magazines (not included) and there is a large mag release at the rear of the well included in the larger trigger guard. It’s configured for any compatible AR15- type pistol grip, Jackson’s included an Ergo-type, which worked well, but Automatic doesn’t supply anything from the box.

The butt folds to the right and is unlocked by a button on the left. In this position, a separate catch keeps it there. It’s fully adjustable, with larger thumbwheels used to lock/unlock the length of pull (LOP) and comb height. LOP is 14.5- 16” with 1.5” of vertical comb movement. This item can be moved left/right to suit head position and also reversed to give more or less length for cheek support. But it doesn’t stop there; the recoil pad assembly can rotate and move vertically for that perfect position to get the rubber pad exactly into the shoulder pocket. A short section of Picatinny rail is included for a monopod and can be removed so it can ride a rear bag.

Two QD socket swivel cups are fitted and the front of the forend is drilled and tapped for an NV hood. You get a choice of colours – black and what they call desert, which looks more like champagne.

The barrelled action drops in precisely, however you will need a longer front action screw, as the standard 700 one is too short. Not sure of torque settings, but I wound it down to 5.2 Nm for my Bergara B14 HMR and it was OK. In use, it proved comfortable with enough adjustment for most people. Although the minimum LOP of 14.5” might be a bit long for the shorter armed amongst us. I also found that after longer shooting sessions the adjuster thumbwheels got loose, so worth checking. That aside it’s a great build that works and looks the business. It’s not cheap at £1199, but still £94 less than AI’s AX chassis. You choose!