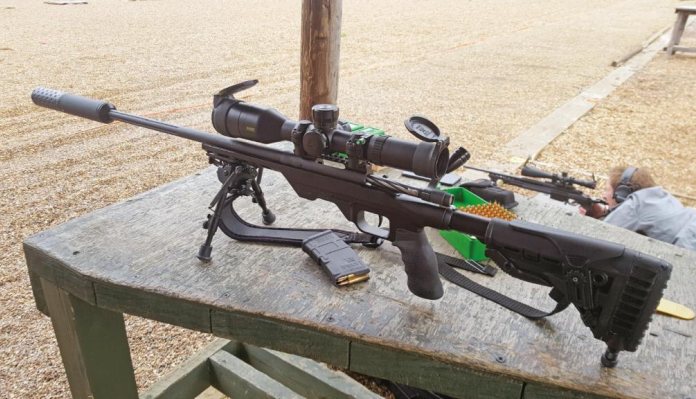 I use my rifle for fox, varmint and target shooting and there are lots of scopes on the market that are focused specifically towards each of these tasks individually. I needed something that would cover me for all of them. This is pretty much impossible, as various features on a target model can be described as less than desirable for hunting and vise versa. For example, a first focal plane (FFP) reticle is very slim at lower magnifications, therefore making it hard to see in low light hunting scenarios, but precise for grouping shots on a target. For shooting targets at varying distances it works well, as it allows me to read the fall of shot and make the appropriate windage/elevation adjustment at any magnification setting!

In order to get greater amounts of elevation and windage adjustment, target scopes often come with a larger diameter tube, which in turn makes them heavier. You can see where this is going; it is simply advantages V disadvantages! In the end, I made my decision based on round count; I simply shoot a lot more ammo at longer ranges, so the target features had to take priority.

A deal of research

After a great deal of research, the features I considered when making my choice were the quality of lenses, magnification range, size of objective lens, the field of view, parallax adjustment, the amount of elevation/ windage adjustment, the units of adjustment, first or second FFP/SFP and finally reticle choice! Regarding budget, the best advice I can offer is to spend as much as you can possibly afford, even if it exceeds the price of your rifle, which it did in the case of the MVP. Scopes after all are a precision instrument!

In the end, I opted for a Bushnell Elite Tactical DMR 3.5-21 x 50 with a G2 reticle in FFP from Optics Warehouse. In my opinion, at the time of buying, it is one of the best scopes on the market for its price. It was not easy finding a reputable manufacturer offering a FFP model, offering both a Mil-Dot reticle and tactical turrets too, with 29 mils of elevation adjustment and high quality Japanese glass for under £1000.

Now, these two items are often overlooked by a lot of shooters; I mean by this point you will have paid for a rifle and scope, maybe a moderator as well. Let alone the upgrades I have already talked about! With a lot of rifles coming with some sort of base as standard and with mounts starting from about £3, it is very tempting to cheap out! I have been guilty of this myself, as they seem to do the job just fine, but when it comes to long range shooting, making multiple adjustments to your scope, recoil and maintaining a correct zero, some precision hardware mounts goes a long way to improving accuracy and concentricity.

My bases were two piece Picatinny and as a result severely limited the position of my mounts on the body tube and meant my ability to position the scope correctly was compromised. Unfortunately, choices for me were limited or nonexistent and I settled for a one piece UTG Picatinny rail from the good old USA. Deciding which mounts I would be using was easy, a set of Tier One’s Picatinny, 2-piece rings with an integrated bubble level. You only need to watch the video on their website of them being manufactured to understand why they are the best, offering ultimate repeatability (if using a similarly well manufactured rail) and the ability to hold zero. You pay the price though at around £120 but there is no point connecting a £1000 scope to a £1000 gun with Mickey Mouse £3 mounts!

In my opinion, the sound moderator and their availability to the civilian rifle shooter represents one of the most significant advances in shooting. I opted for the British-made Wildcat Evo from UK Custom Shop, due to its modular design, which allows me to use it on multiple calibres. Not only does it minimise the volume of the shot but the muzzle blast and most importantly the recoil of the rifle is reduced significantly too. Yes, I know my MVP is a 223 but even the difference here with moddy ON/OFF is significant! Due to the extra weight being added to the rifle, muzzle flip in also reduced as well. All of these qualities add up to making me and my rifle more accurate and consistent and I would highly recommend one; watch out though, as they can get very hot and take a while to cool down if you are doing long shot strings; which results in a heat haze that makes the target shimmer in the scope and reduces your ability to place the reticle precisely!

I have two bipods for my rifle; the first being the tried and tested, no nonsense Harris BRS (Bench Rest Swivel) with 6-9” inch legs, which I use for my range work. Although there are cheaper alternatives, the Harris is proven in the field and future proofs me for use on any heavier, higher calibre rifles that I might own. It allows me to stay low to the ground and also adjust for cant in relation to the integrated bubble level in the tier one mounts. My second choice is specifically for when I am out hunting and is the Javelin. This particular model allows me to connect and disconnect it instantly, as it attaches using magnets to a mounting point on the rifle. More and more shooters shoot from sticks these days and it is nice not to have a bipod in the way (especially with the short forend on my MDT chassis) when resting it on the sticks. An important benefit for when walking decent distances is that that the bipod only weighs 149 grams, which is less than an iPhone!

Factory ammunition; now this is a touchy subject, as just finding a local dealer who stocks a decent selection is hard enough. This availability, or the lack of it, will form the basis for what you will try in your rifle. I tried as many makes and weights as possible, as the performance difference between various brands was significant to say the least! In .223, and for use on foxes etc. I would highly recommend Hornady’s 53-grain Superformance or 55gr V-MAX if it’s a ballistic tip you are after. They both shot very well indeed, the Superformance screams along at over 3300 fps, which is great and performance at distance is excellent too! They printed a nice group at just shy of 400 yards (after I got the wind dialed in!) At £20 for a box of 20 it is not cheap though. For target use, I found 62-grain GGG very good and very affordable at around £21 for 50, but other than at Bisley, it was hard to find anyone who stocked it.

It is because of this and the increased difficulty in reliably getting hold of both types of ammo that I decided to enter the world of reloading and all I can say is wow, I am glad I did! I am now using an excellent reloading kit from Lee called the Breech lock challenger kit, which I got from Henry Kranks. This means I am enjoying 0.25-0.5” groups from the two bullets I have chosen. The relatively new Sierra 69-grain Tipped Match Kings and Hornady 60-grain V-MAX, which both just so happen to share the same zero at 100 yards; perfect!

My search for accuracy definitely represents a journey of which i would not swap for anything. could i have achieved 0.25-0.5” groups at 100 yards, as well as stellar performance at 500 to 600 yards from the start, by buying a better rifle and without spending all this time and effort looking for upgrades? yes, of course i could, but i can hand on heart say that the whole experience has been thoroughly educational and has left me with a rifle that is unique and tailored to my exact requirements. now that my mvp consists of some pretty decent components, i have supreme confidence in its capabilities and that is worth its absolute weight in gold. i just need to do my bit!!