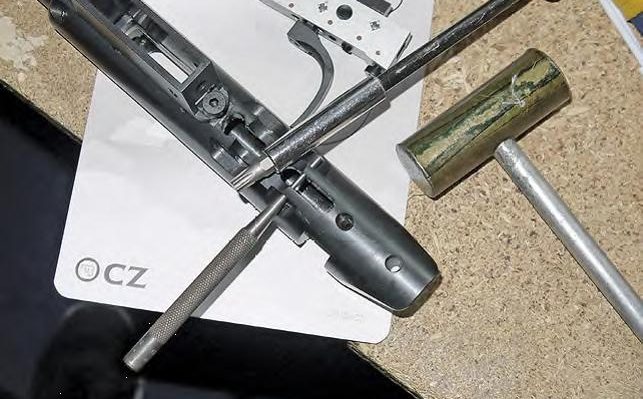 The CZ452 rimfire, bolt-action has finally been replaced with the newer 455, the major difference being the new model is a switch barrel, but everything else is the same, and the safety catch, and trigger do feel better. New then is a drop-in trigger kit, called the Flyweight, made by CZ.

It comes pre-assembled in an aluminum body frame (case) and can be fitted to CZ455s from gun numbers A956497 upwards. It uses the existing body pins but comes with 2 x Allen keys and a spare body pin, along with a new trigger guard plate. The instructions are vague and a bit confusing to say the least and do not mention the extra tools required for the job, or how to remove the old trigger mech. I mentioned this to the importers and they said they would be working on a full English version. I would say from the outset, if you do not feel up to it, get it done by a gunsmith. It’s not a hard job, and takes about 5 minutes, but a knowledge of the procedure is essential.

In terms of adjustment, you get 1st and 2nd stage resistance, length of pull and sear catch. Whereas the original trigger blade was curved and angled back, the new one is more L-shaped and presents a near vertical and wider lever, which I preferred.

You will need a T25 Torx driver, hammer and 1/8” pin punch. The T25 removes the action bolts along with the trigger guard and plate and the punch the twin cross pins that secures the original trigger mech. The Flyweight features two Allen screws in the alloy frame that tensions the unit once in place. Back these off, then align the unit and re-insert the pins, then wind in the Allen screws to lock it into position to a setting of 0.8 Newton (N).

The Flyweight comes pre-set to 3 N, adjustment is via the four screws in the base of the aluminum case. In this, you can vary the weight, set 1st and 2nd stage pull, or even negate the 1st stage completely, adjust pull length and set sear height. Again, the instructions are a bit confusing, as some of the terminology used does not translate well into English. However, a bit of experimentation soon had a decent pull of around 1.5-2lbs with virtually no creep. At this stage, I would say always check for safety and correct operation, as it’s possible to come to a stage where the mechanism will not set, nor retain the bolt.

Also, do a safety check; after you have adjusted it to your likes, cock the action, set the safety and squeeze the trigger, then remove the safety the rifle should not fire - if it does, re-adjust. Though the 455’s standard trigger is better than the earlier 452’s, the rifle we used did offer a half decent pull. However, the Flyweight, when fully understood and set up correctly, does offer more sophistication and a better blade shape.