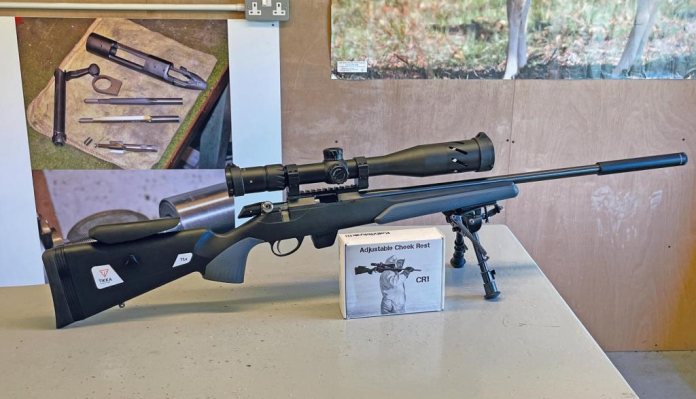 There’s little doubt that when shooting a scoped rifle, an adjustable comb is a real boon, as most standard guns feature a butt with a low/straight layout. Why? Well, it improves overall head position with a view to both cheek weld and eye/scope alignment. Some rifles offer this facility from the factory, but a lot more don’t, a problem exacerbated by the prolific and simpler, moulded polymer furniture we see today! And unlike more solid materials, it’s awkward and more expensive for a gunsmith to work on.

A serious injection of cash

I encountered this problem on my new Tikka T1x MTR (Multi Task Rimfire) as its basic, moulded stock shows the classic low/straight comb. Fine for a low-mounted scope with a sub-50mm objective, but I also wanted to use it for longer range .22 LR shooting, using a Discovery HD34 4-24x50 SFIR FFP with a 34mm body tube. Fitted up, cheek weld and alignment were both issues. So, what to do?

Instead, I could have bought Tikka’s T1x UPR (Ultimate Precision Rifle) with an adjustable comb as standard and a more solid build, but that would have increased my layout by £400 from the £550 I paid for the MTR. Conversely, GRS Stocks offer their Bifrost fully adjustable, after-market replacement. A superb piece of kit, but again adding around £450 to the bottom line.

To be honest, the MTR stock was not that bad, and with the addition of Tikka’s replacement pistol grip and forend units, proved very shootable! However, the low comb needed sorting, so let me introduce you to Kalix Teknik of Sweden, and their CR1 adjustable comb kit, especially for rifles with hollow, moulded stocks. Imported and distributed by GMK Ltd, I had never heard of them, but as soon as I opened the box all was made clear. I say this as Browning has been using them for some time on their rifles as have other big manufacturers, including Tikka.

As the T1x shares the same dimensions and stock layout as the T3x; one size fits all, check out Kalix Teknik’s website for the full range of makes and models covered. The kit consists of the following items: an ambidextrous polymer comb with twin vertical pillars, aluminium mounting block with locking screw/wheel and retaining screw x1, plastic internal fitting pieces x2, locking circlip x1, a self-adhesive drilling template and some instructions.

Tool-wise, you’ll need an electric drill and 6mm, 10mm and 12mm bits, I’d also recommend a small pilot bit of around 2mm. Plus a long-bladed knife for inserting the mounting block, and a medium Phillips screwdriver to remove the butt. Oh, and a pair of scissors and pliers. A vice or Workmate is also a good idea, to hold the stock secure.

First, take the action from the stock, then remove the butt plate and the internal polystyrene filler block. When attached properly, the template allows you to drill the holes required exactly. You will see it’s shaped like a crucifix and is printed with which way it goes on. Alignment is accomplished by cutting to the outside line and clipping out the rear wedge section, which, along with an arrow at the front, allows you to align it exactly with the moulding seam that runs up the centre of the comb. Looking at the template shows that you can drill it on either side for left or right-handed preference.

So, apply the template correctly and align the rear with the edge of the butt, and you’re ready. Using the 2mm bit, drill exactly in the centre of the indicated holes as this will reduce tolerances when you drill the final holes, which is essential for easy operation. A tip here is to move up in diameters rather than ripping through with a 12mm bit right away. If you’re a right-hander then drill the adjuster screw on the right of the butt; reverse if you’re left-handed.

The drilling order looking from the right side/top is a 12mm hole at either end, with a 6mm in the middle, which is for fixing the block. The 10mm is drilled in the side for the adjuster screw. Now time to insert the block. First, fit the positioning pieces, one is taller than the other and marked F (front) and the shorter R (rear). They just snap on, with F going in front. There’s a slot in the bottom of the block that you can slide in the knife blade to allow you to position it easily. Once in, align the hole and insert the middle screw to secure it.

At this stage, check everything is aligned and slide in the twin shafts of the comb section, which should move freely. If not, it will probably be the 12mm holes, which can be opened a tad. Insert the adjuster screw, and check it locks. Now you have a choice, as you can fit the circlip on the base of the rear shaft to stop it coming out, to be honest, I did not bother, and everything stayed in place fine.

In use, the comb kit gives about 1”+ of vertical movement, which is more than enough. Equally, it’s long enough and offers a good cheek weld, with its rubberized surface, plus looks like it’s part of the design. RRP is around £150, which is good, for what is a practical and quality design. The average price of a T1x MTR is around £550 and £700 with the comb kit. OK, it’s not a GRS Bifrost or a Tikka UPR, the former offering perhaps the best after-market solution, as it gives full adjustment on the comb, LOP and butt pad height as well as angle. However, the CR1 improves shootability no end and saves you around £300-350. If you’re capable of a bit of DIY, what’s not to like?