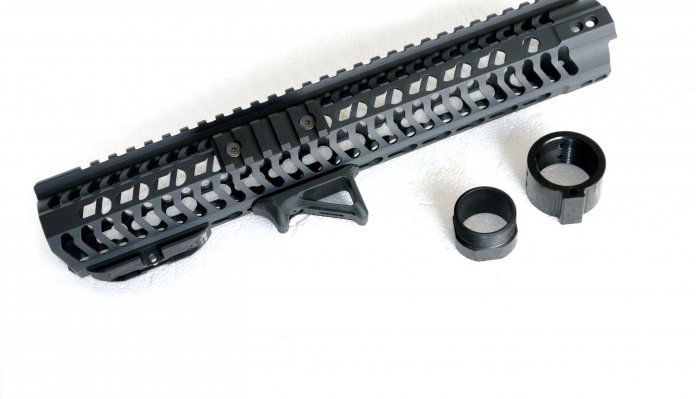 It seems to me that probably 70% of all the straight-pull AR15s in the UK have some sort of free-float forend and I think the most popular is what I call the 4-way style. This alloy tube shows four Picatinny rails at 12, 3, 6 and 9 o’clock, which can be used for mounting all sorts of kit. Using my Smith & Wesson Military & Police 15-22 as an example I have a forward grip at six, a gun torch at nine and a snap-lock sling loop at twelve. Very useful but what about the other sections that are not used? Well the cross slots are not the most comfortable thing to hold, so what do we do; we cover them up with rail guards!

On test is Odin Works 12.5” K-Mod forend, which pretty much offers the perfect recipe. First of all why a free float? As the name suggests the barrel is left free of any influences of the forend so should be more accurate. In this case the internal diameter is 1.6” – more than enough! It’s light at 10oz too as the build is skeletonised. Most noticeable is the single Picatinny rail at 12 o’clock, instead of three more at 3, 6 and 9 there are K-Mod slots. These tad pole shaped cut-outs are designed to accept accessories and use L-shaped lugs that engage and slide forward and are locked down by Allen screws.

K-Mod has been around for a year or two but this is the first time I have had a play and it’s impressive. The forend comes with a short section of Picatinny rail, which can be positioned where you want. For example it could be for a forward grip or a light/laser elsewhere. Importers NWCP also sent me Odin’s Low Profile Bipod Adaptor and Handstop – a bit like a mini Angled Fore Grip.

Fitting requires the barrel to be removed so you will need the AR spanner, which might mean a trip to a gunsmith. The old forend is removed along with the original barrel nut. The forend includes an adaptor, barrel nut, alignment pin and tube of thread lock (Vibra-Tite). The adaptor slides over the barrel and screws down onto the receiver. At 12 o’clock is the gas tube port, which does not concern a mann-opp, straight-pull, but to align it correctly wind it down as far as you can, but leave a tad of movement then slide the pin through the port and into the hole in the front of the receiver. This will set it upright.

Put some Vibra-Tite onto the barrel nut threads and wind it on and tighten to 40 ft/lbs and remove the pin. Slide the forend on so the 12 o’clock slot aligns with the gas port block and screw in the three pairs of retaining screws and you’re done! The end result is a light and rigid free-float forend that is not encumbered by too many redundant rails; works for me!