Pete Moore Considers A Couple Of AR15 Triggers From NWCP 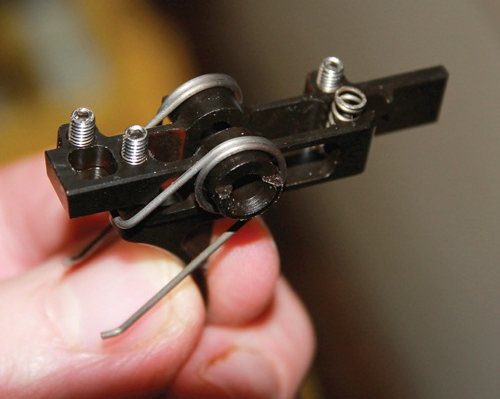 Let’s face it your basic AR15 trigger is a bit like walking up a set of steep stairs with a 60lb pack on your back; for that read – hard work! Then you get to the top and the floor disappears as you make the break. My A2 SGC Speedmaster was like this with what is best described as a workable, military trigger. OK for getting lead down range but, and given the accuracy potential of any well built AR, not ideal. Wanting to keep the price down I fitted as an interim measure a JP, reduced power spring kit. It did little for the feel but it brought the pull down to far more useable levels and it works!

But I now feel I would like a bit more finesse and have started looking at AR triggers in general. There are a lot out there and speaking to Wayne Titterton (North West Custom Parts) about this he said he’d send two replacement kits from Spike’s Tactical for my thoughts on them. Called the Enhanced Battle Trigger and the Enhanced Battle Trigger Mk II. Both represent price and performance in the medium to high ends of the market.

Components are made from hammer-forged 8620 tool steel, heat- treated, and feature a smooth and tough matte Nickel Boron finish. In the case of the Mk II weight has been reduced by milling out sections from the side of the hammer and also skeletonising the disconnecter.

The Battle Trigger is very much the standard AR unit only with precisely cut and shaped sear and notch to give a crisp release. Weight I reckon was around the 4-5 lb mark, which is firm, however the break is clean and a reduced spring kit will drop that down to suit. But for CSR (Civilian Service Rifle) use is about spot on for Service Optic class! This comes fitted with all springs, disconnecter along with two axis pins.

The Enhanced Mk II is all together more sophisticated. The trigger body is machined to accept three, Allan-headed studs (included) that allow you to set up the movement for pull, reset and disconnect travel. You do not have to fit them but without you do get a small amount of take-up/creep before the break. When fitted and adjusted correctly the mech feels almost dead, with minimum movement, before during and after and feels excellent. There’s no over travel or long, graunchy take up just a solid pressure that goes on to a crisp, readable break.

Another plus is the KNS Gen 2 Mod ST anti-rotation pin set. The trigger and hammer axis pins on an AR can work sideways if not retained and could get lost or render the mech inoperable. My SGC Speedmaster has a tiny circlip on the end of the pin; the KNS adopts a different approach!

One pin has raised lugs at each end and the other is drilled and threaded for countersunk screws, two connector plates with compatible ends are included. With the trigger fitted locate the lugged end with the socket in the plate then position the other end over the threaded hole and screw them together, repeat with the other side and you’re done. One clever item is a pointed brass tip that screws into the shorter/threaded trigger pin, its shape allows it to be inserted and align the hammer as it’s pushed through the side of the receiver and axis hole.

The hammer is fitted with a JP 3.5T (red) spring that gives a pull of around 3.5-4lbs, not silly light but a good trigger none the less and combined with the precision components and the ability to reduce trigger movement to a minimum offers a nice set up. It comes with all tools required and thread locking compound.

STRIP OUT, PUT IN

Changing out an AR trigger mechanism is not that hard. You will need a long, 1/8” pin punch and an extended 3/16 Allen key to undo the pistol grip bolt. Though a T30 Torx drive on a long bar will also do the job!

Start by dropping the hammer and removing the lower receiver and laying it down ‘grip-up’. Then undo the pistol grip and lift it off. Be careful here as there’s a spring and plunger underneath that retains the safety catch. Remove these and then the safety from right to left.

It’s now just a matter of drifting out the hammer and trigger axis pins with the 1/8” punch. Note the rear pin that passes through the trigger assembly also holds the disconnecter catch. Both hammer and trigger will be under a bit of spring pressure and also note how the springs wrap. In the case of the trigger the two open arms lie flat and forward along the floor of the receiver to tension the trigger. The hammer has a U-shaped end that sits behind the body with the two open ends pushing up and sitting on shelves on either side of the trigger pivot point.

Position the new trigger back inside and locate the disconnecter over the coil spring and push down and insert the pin punch. You can now insert the axis pin and with a little wiggle of the punch all the components will align. The same holds for the hammer but you will need to exert more pressure to keep it in place. With that done and any pin locking arrangements set, re-fit the safety catch plunger and spring and screw on the pistol grip and it’s job done!