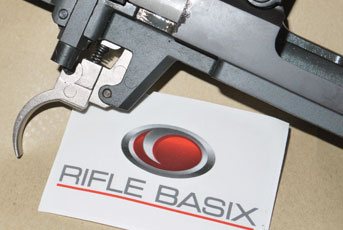 There’s little doubt that one of the corner stones of rifle accuracy is a good trigger and over the years gun manufacturers have come out of the dark ages and started to offer better, off-the-shelf units. Ruger’s centrefire bolt-action M77 series is now in its third incarnation (the M77 Hawkeye) which comes equipped with their LC6 (light & crisp) mechanism. Certainly an improvement over the older M77 Mk II, but for the more discerning shooter still a bit on the heavy side.

Unlike a Remy 700, which has three adjustments built into its trigger mech as standard, the LC6 does not so there are only two alternatives; 1 – get your gunsmith to sort it or 2 – buy a drop-in replacement. Some of the better and more cost effective units are from Rifle Basix’s and I have one in each of my Ruger M77/22 and M77/17 rimfires and they make a serious difference. So it was with some pleasure I noted they now make a unit for the Hawkeye (RU-MK II), which also includes the 77 Mk II and by association their Scout Rifle.

The RU-MK II offers that magical concept of non-gunsmithing and unless you are mechanically ‘challenged’ it’s an easy D.I.Y. job. The kit comes with a replacement trigger blade assembly, weight of pull spring and adjuster, Allan key and safety adjuster screw for the M77’s rather specific 3-position design.

Start by taking the action out of the stock and removing the bolt then place tape over the sear pivot pin so you don’t lose it (VIP). Push out the trigger pin and retain it as it will go back in with the new unit but remove the old trigger and its spring. Screw in the weight of pull adjuster a little and drop in the spring from the top – wide end upwards, then refit the trigger blade assembly with the existing pin as mentioned.

Refit the bolt, close it and pull the trigger, you will feel the break and if it’s too light or heavy wind the adjuster screw in and out as desired to get your selected weight. The RU-MK II can be set from 14oz to 2.5 lbs.

Now for the safety which is linked to the trigger by a transverse screw that sits at 90° to the blade (on the right) and impinges on the base of the rotary, 3-position drum. The Ruger design offers forward FIRE, middle SAFE with bolt operation and rearwards SAFE with locked bolt; this is achieved by steps cut in the base of the drum that controls movement as it turns.

It is not a hard job but you must be aware you are setting three different functions of the safety lever. Screw the adjustment screw into the right side of the trigger assembly with the un-threaded (off set) section facing to the right and wind the lock (jam) nut onto the protruding thread on the left, but at this stage do not tighten it!

Refit the bolt and cock the action. FIRE - the safety screw should be clear of but under the base of the drum so the trigger can fully function, there is a picture in the instructions. SAFE with bolt movement – cock the action and move the safety catch to its middle position, move safety screw in ½-turn until the tip contacts the base of the drum and lightly tighten the lock nut. In this position check that the trigger does not operate but you can cycle the bolt. Also at this stage flip the lever back to FIRE to confirm that the trigger/safety functions correctly. SAFE bolt locked – cock as before and swing the lever to its third/final position, here the trigger will be blocked as will bolt movement.

When you are happy that all three settings function properly tighten the locking nut, which is small making the job awkward. On my two Ruger rimfires and for peace of mind I set up as described and used some thread locking fluid to ensure there was no movement after a lot of use. Rifle Basic’s make kits for most common rifles so just see what they have

FOR - Easy to fit, adjustable and it works
AGAINST - Use a thread lock on the safety adjustment screw and nut
VERDICT - A quick, easy, well priced and effective trigger job