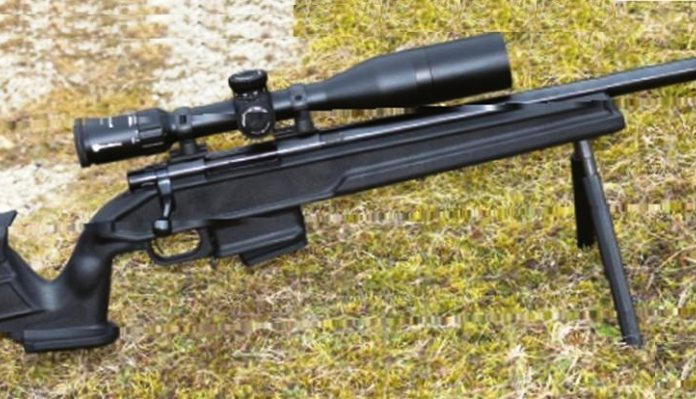 As a company, Archangel has been offering replacement stock solutions for some of the most popular guns around, such as the Ruger 10/22, for some time. In recent years they have upped their game and today produce some solid and practical/tactical furniture and accessories. So for example, you can get a fully adjustable rig for guns as diverse as the old M1891 Moisin Nagant or the subject of this review, the popular Howa 1500!

Though not dismissing areas such as a decent trigger and bedding, any modern factory rifle can be improved by the replacement of the stock it came in with something more shootable. For example, most standard synthetic units are not amazing and might shoot acceptable groups! But acceptable is a country mile away from tight and consistent, so a decent, aftermarket stock is likely to improve performance in general and are available for most common rifles. There’s little or no modification or gunsmithing required; just remove the two action screws, pull off the old stock, and drop the action into something better!

This is what Archangel’s AA1500 Precision Rifle Stock offers for the generic Howa 1500, at what I feel is a middle of the road price; given you can be paying serious money for the pleasure of a GRS, McMillan or similar. Made from high-strength carbon fibre filled polymer, it’s a one-piece build that includes integral magazine well (mag included), release catch and trigger guard. Add in a discrete integral bipod and heightadjustable comb and length of pull (LOP) and it looks to have potential!

The first thing I noticed was its solidity; tipping the scale at 5.6 lbs, it’s not light but is one of the most rigid builds I have seen. Gripping the butt and trying to move the forend is pointless, so let’s take a closer look! The action and trigger mechanism voids are well finished and show aluminium pillars front and rear. The rectangular forend houses an integral bipod that is deployed by a pull-back catch in front of the mag well, it’s non-adjustable for height and features a pair of textured feet, there’s also a QD sling stud socket in the tip/underside of the forend.

The butt is ambidextrous with an upright, goose neck pistol grip with palm swells and palm shelf. A swing-open trap underneath offers a storage compartment. The rectangular butt section shows a low gripping hook, which is enough to get a hold of with your supporting hand. Comb height is adjusted by a wheel set in the base and you get a good 1.5”; good enough for day and night scopes! LOP is controlled by a similar wheel in the rear plate with a total movement of 1.5” from 13.5 to 15”. Either side are two more QD swivel sockets. On reflection, Archangel would have done better to put two QD sling swivel sockets on either side of the forend as opposed to one underneath, as that would make slinging the rifle easier. Also they missed a trick by not including a Picatinny rail under the butt for a monopod, which would enhance performance!

Importers Highland outdoors supplied the AA1500 with a heavy barrelled 223 Rem Howa 1500 action. Inspection of the barrel channel showed the tube to be just kissing with the left side of the forend at the front, on removing it; it was plain to see that area needed opening up a little to make it a 100% free-float. In fairness it was a big fat tube and a medium weight would not have that issue! This is not uncommon with drop-in stocks!

I’m in two minds about the bipod – 1, clever idea to have an integral system, as it does not add weight or bulk – 2, but it’s just a basic set of legs with no height adjustment and limited cant. In use it’s rigid and stable, but a bit too high and the plastic feet skid on smooth surfaces and would be better with rubber covers. The ability to mount a QD sling stud, so that you could fit a Harris-type pod would only add to the appeal!

Though my tester was in 223 Rem, which is near recoil-free, the heavy weight of the fat barrel and action along with scope and the extra 5.6 lbs of stock will doubtless make it a comfortable gun in 308 Win too. The rifle shot well, nailing in tight groups with the right ammo, the pistol grip though a little slim, filled the hand nicely and positioned it for a comfortable firing hand grip. Equally so, the ability to quickly and precisely adjust comb height and LOP, even when in the shoulder was good. My example would need the forend channel opening up for a 100% free-float and I’d be tempted to get the action synthetically bedded too! As that too can only aid performance, but that’s just me and many would disagree. My stock was in black, but Archangel’s website shows it also available in Desert Tan and Olive Drab too!