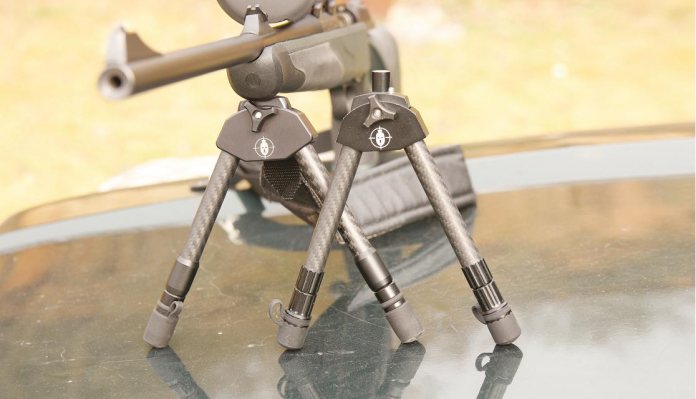 In 2014 Spartan Precision Equipment came out with their radical, Javelin, Supa-Lite bipod system. Made from carbon fibre, it offered full cant and pan movement and employed a unique, magnetic QD attachment system (patented) that allowed you to plug the pod in when required or remove it when not. Solving the problems of weight and bulk on a sporting rifle easily - genius!

Though at £225 (then) it was expensive. I also found that the gape (leg spread) was a little too narrow, so the rifle was a bit unstable if left and could fall over! Also, the telescopic leg sections could be pulled out accidently, so they printed red stop lines on them; not ideal! The feet were rubber and when removed exposed titanium spikes for hard surfaces. They were a bit short and could pull off accidently.

Connection to the rifle was made by a RAP (rifle adaptor plate) an external socket that screwed through the forend. You got the choice of flat and rounded bases to suit various stocks and they included an integral sling swivel hole. Apart from the obvious lack of weight, the real beauty was you only needed one bipod, and then fit RAPs to all the guns you wanted it for.

Two years down the road Spartan have come out with the Mk II version, which addresses my negative findings and also adds some better features too. Please note; the Mk II on test was fitted to my Blaser R8 Professional Success for photography purposes, as my Mauser M03 is away getting the Gunsmith Adaptor fitted. I say this as the special R8 forend adaptor has a deeper mounting socket, meaning the shorter spigot of the Mk II goes up too far to allow easy operation of the cant locking screw.

Now called the Javelin Mk II, it comes in Standard and Long versions at 6.5-9.5” and 8.5-13” Min/max height over bore accordingly. After testing both I feel that the 6.5-9.5” model is the most practical of the two options. I say this as in use off the bench and more importantly in the field I have rarely ever needed to crank it up to 9.5”! So it’s better that you can drop the height than only increase it as with the Long.

30MM MAKES ALL THE DIFFERENCE!

The gape is increased from 165- 195mm and that extra 30mm makes all the difference to stability. The leg extensions now have integral stops and as before rotate to unlock/lock. The pull-off rubber feet are longer, so more secure and underneath are now slim, Titanium pegs. All in all a better mouse trap and the price is cheaper, which includes a free RAP; not too bad at all! Finally there’s the Gunsmith Adaptor, which is a special RAP socket that can be set into the forend with high-strength adhesive. I have a couple of these; one is going into my FX Wildcat Bullpup air rifle and the other for my Mauser M03.

Spartan has not been sitting on their laurels either, as they have found time to design a system for Blaser’s R8 based on the Javelin (Blaser Carbon Bipod). I have one for my R8 and it’s good. They have also just finished a shooting tripod/double sticks that uses the same magnetic attachment system, with an adaptor for spotting scopes or binos. Looking at their website shows more development on its way; the futures bright!