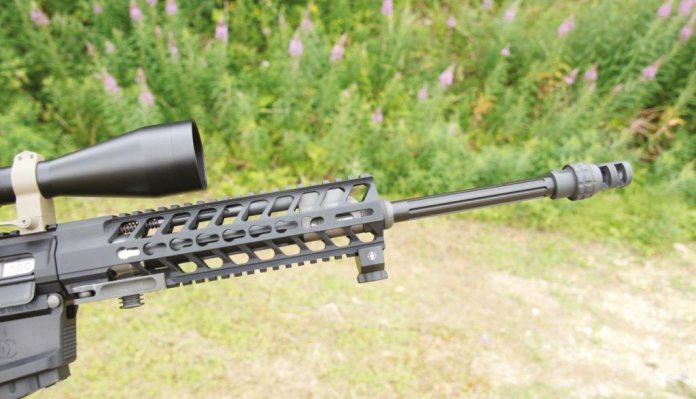 The Javelin light weight bipod designed by Spartan Precision Equipment is a bit Marmite. On the plus side, it weighs nothing and its plug-in magnetic attachment system means that you don’t have to have it on the rifle until required and it offers swivel and lockable cant facilities. Conversely it’s expensive compared to the opposition and from a more precision view point, not as stable, so more for the hunter than the target shooter. But Spartan has come back with an improved rifle adaptor plate (RAP) that should give it more general appeal. They have re-machined the inside of the RAP, so that the Javelin can be inserted in two ways. First, is the normal plug-in mode with full cant and swivel function as before. Second, and by using the original traverse limiter pin, turned 180°, the mounting spigot is inserted and locks into place, so that the swivel function is eliminated. Cant is still available! The difference in stability is noticeable, with none of the annoying movement that drew criticism from more target-orientated users. So, now you have all the advantages of the Javelin, with a stability factor near that of the Harris; result (shown the Picatinny rail adaptor version) but the modification is available on all RAPs.