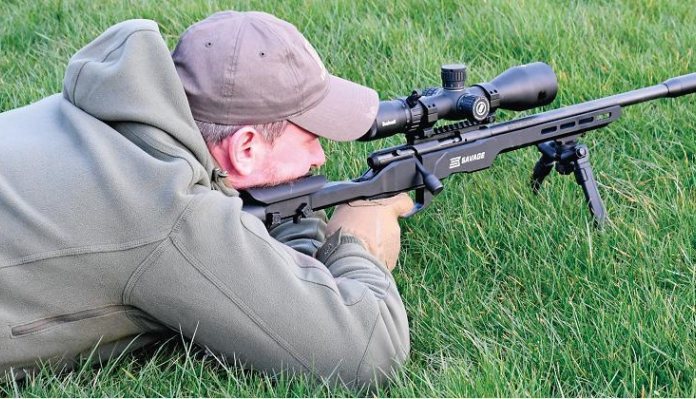 Magpul is a somewhat synonymous name to tactical shooting, particularly with AR-15 derivatives. More rifles are now using the company’s M-lock system, but I hadn’t seen any particular crossover products for the sporting rifle market. Well now there is, and the latest M-Lok bipod has impressed me. There are several fittings available to suit rifles with M-Lok, Picatinny, A.R.M.S. and sling stud.

The Harris bipod is legendary, and I’m still a great believer, so anything new is up against some stiff competition, somewhat literally, as wobbly, weak bipods that bend or snap will never carry favour. The Magpul bipod uses an intelligent mixture of short fibre reinforced polymers with Mil-Spec hard anodised 6061 T-6 aluminium and steel. This unique construction means that the unit weighs just 326-grams yet the legs can securely extend from 180mm/7” to 268mm/10.5” in 12.5mm/0.5” increments. They lock down from an under-barrel position to perpendicular with extension latches at the top of each leg’s lower half.

Rather than being sprung, the pivot has a mechanical detent to hold them folded with a locking button to press when reversing to the stored position. It’s solid and will resist all acceptable ‘loading’ pressure as the shooter presses their shoulder into the rifle’s recoil pad.

Each leg has a circular rubber foot for grip on hard surfaces, but the real gems are the Tilt/Cant and Pan functionality. The first may not seem that exciting, but the detail of the pivot axis being just 7.5mm below the rifle is crucial to maintain lateral balance. Especially when a rifle whose generally top-heavy stature with a large optic, can cause problems on bipods with a pivot axis far below the gun, in the quest for weight savings alone. Secondly, both pan and tilt are controlled by a single, heavily knurled and directly accessible 25mm/1” diameter dial on the underside, between the legs, used to adjust the friction.

I like designs where core functionality is simple to control without sacrificing build quality or mechanical strength. I have seen some great new designs but too many over the last five years trip up over themselves. I will be acquiring stud fitting and Picatinny versions as soon as possible to use on test guns, running the whole range through its paces, so stay tuned. All functions are quiet in use, and the folded, sleek profile doesn’t dig into your back either. I’m definitely pleased.