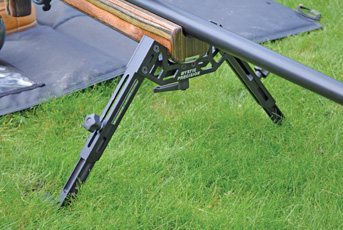 The Mystic Precision Bipod offers an alternative view on the increasingly popular F-TR bipod theme. Rather than showing multiple fine adjustment axes, the Mystic offers the one element so desired by shooters using this kit which is at odds with them – and that’s light weight. When driving a .223 or .308 out to 1200 yards for the ultimate long range target performance, barrel length is vital and every extra millimetre costs grams of mass, lightweight designs can allow shooters to maximise their muzzle velocities and stay within the strict 8.25kg weight limit.

The downside to the lighter weight is setup time, whereas bipods offering a cant axis can be adjusted from behind the butt of the gun and locked into position, the mystic offers two telescoping legs that are individually drawn in and out of the cradle to alter the height and angle of the gun. Ski feet allow the rifle to slide rather than bounce on its support surface and are angled to remain in permanent contact with the ground or shooting mat upon which the setup rests.

The central cradle surrounds the gun and unlike some designs, allows a very low position to be maintained and its simple looks blend nicely with the rifle, it is also quick to mount and solid in use as a quick release lever locks it firmly in place onto a standard accessory rail. The threaded knobs that lock the legs at required height sit to the side on the forend but as F-TR guns often have a long stock, full set up, positioning and levelling of the gun all have to be done kneeling to one side of the rifle so you can reach over.

The 6000 series aluminium construction is well machined and deeply anodised but will mark on the legs as the thumbscrews are adjusted through its life. In use I really liked the bipod, it offered an assured stance to the gun and tracked well under recoil but as F-TR is often shot off a grassy surface at the firing point, setup was critical to maintain cant/level and from the firing position, if something wasn’t right, you had to get up and sort it out, not just reach forward with your left arm and turn a control.

The more I use this type of bipod the more I recognise their characteristics, and much as I love the size, stability and weight, smooth feet will not suit those who like to `load` the bipod with their shoulder to consistently control recoil but for the F-TR shooter allowing free recoil and seeking light weight at the expense of a little setup time, the Mystic has a lot to offer.