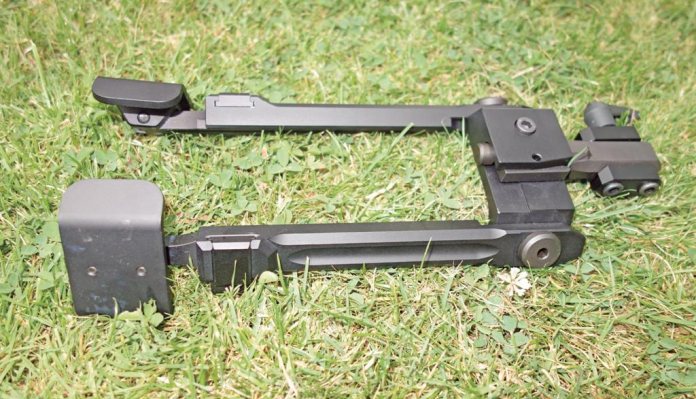 Many shooters fit a bipod to their rifles, and you really can’t beat one for a stable, supported shooting position.

I’ve used all manner of bipods over the years; the first was a modified Bren Gun bipod that I adapted to use on a precharged air rifle, it worked well enough but looking back it was a bit of a bodge! The idea was sound, as several production bipods are actually based on the bipod found on the World War II era LMG. I later used Parker Hale, Harris and Harris copies and most recently the ultra light Steinert Neopod. All of the above have had their strong and weak points but I recently received a ‘Type A’ Bipod from Phoenix Tactical, a relatively new company, run by fellow Civilian Service Rifle shooter Brian McManus.

New Kid On The Block

Brian’s not been in business very long but seems to have hit the ground running with a useful range of accessories but I think that the bipod is the stand out product in his range. At first glance, you’d think it was off some sort of .50-calibre sniper rifle, or even a belt-fed machinegun! It’s certainly a sturdy looking item but it’s not as heavy as it might look, at 1lb 3oz (553g) it’s not going to add too much weight to the average ‘Tactical’ or ‘Practical’ style rifle, or straightpull AR15 for that matter.

The majority of the wellmade component parts are black anodised alloy and there are no rough edges or burrs to be seen; overall fit and finish is very good indeed. Sprung-loaded legs are attached to a central ‘yoke’, which in turn attaches to a spigot fitted to the rifle it is used on. The legs can be stowed either forwards or back, with the legs being retained by spring-loaded plungers that locate in cut outs in the yoke. To deploy the legs, or to move them to the stowed position, they are pulled out slightly against spring tension. Initially the legs proved to be quite stiff but this was due to the components being new and bone dry; a quick squirt with some gun oil had things freed up nicely and deployment was subsequently much easier. The legs are locked in the down position by more cut outs and once down, they stay down! There’s no way that the legs can fold up, just as you’re about to take the shot and you can really ‘load’ (exert pressure) on the bipod if that’s your style.

Each leg consists of an ‘inner’ and an ‘outer’, with the former sliding within the latter. The legs can be adjusted to one of seven positions, via another spring – loaded catch. The legs can actually be pulled to extend them but that can be a trifle noisy in a ‘tactical’ or hunting situation, so for a quiet life, the catch can be pressed in and the legs extended without too much undue noise. The catch engages in a wavy, ‘zigzag’ shaped recess machined into the inner portion of the leg and the unit locks solidly until it needs to be altered. A lightening groove is machined into the face of the outer leg sections but it also adds a certain something to the overall styling. Sturdy, sledge-style feet are attached to the legs via a bolt and these can be positioned to suit the terrain. The legs can extend (from the pivot point) from 8¼- to 11¾-inches, so there’s plenty to play with length-wise.

The bipod is attached to the rifle via a steel spigot that clamps to the gun in a variety of ways. The model I was sent attaches to the top Picatinny rail of an AR15 free float handguard (or similar) using a lever-style clamp. There’s a raised ridge in the clamp to align with a slot in the rail, to keep things from moving once clamped. To remove the bipod from the spigot, yet another spring-loaded catch, this time in the side of the ‘yoke’, is pressed in and the ‘pod slid off. An Allen screw in the spigot engages with the catch and also allows for a degree of cant adjustment, to compensate for un-even ground; on really un-even terrain, the legs can of course be used to level the unit. The rifle actually hangs down from the bipod, instead of being supported by it and it allows for a much-reduced profile and a low centre of gravity. Once deployed, the legs are between 12- and 16-inches apart, depending on the length of the legs and the end result is superb stability. Also, because the rifle is ‘hanging down’ from the bipod, the pendulum effect kicks in and the rifle is almost self-levelling, neat. As you can tell, I really like this bipod!

Brian has recently altered the spigot slightly, due to feedback from a customer, and the hole that the Allen screw fits in is drilled all the way through, so that the clamp can be mounted on the bottom of a rifle’s freefloat rail by simply re-positioning the Allen screw – simple but clever! If a rifle doesn’t have a Picatinny rail under the forend, they are easy to source and affix with a couple of screws.

I’ve used the Phoenix ‘Type A’ Bipod on a couple of rifles and it worked perfectly and I really can’t fault it! The design is very clever and can be swapped from rifle to rifle easily enough by either swapping the clamps or buying spares.

Not everyone has a Picatinny rail on the top of their rifle stock, of course, and for a conventional, wood-stocked bolt action rifle, it’s obviously not possible to fit one. Help is at hand though, thanks to the ‘Type B’ bipod that attaches under the forend in the more usual way. Once again, a spigot is used and these can be screwed to the underside of the stock and they have a short length of Picatinny rail too. The ‘Type B’ is available with either 6.5-8-inch or 7-9-inch legs but for those requiring a little extra height, maybe using a high capacity magazine for instance, an 8-11- inch version can be ordered as a ‘special’, which usually take three weeks to arrive after the order is placed. It’s also possible to get a Sako TRG adaptor and another that can be embedded in the rifle’s forend. As a hole needs to be drilled to accept it, it might be an idea to entrust this job to a gunsmith…

So, to sum up, the Phoenix ‘Type A’ is a very impressive, versatile product, one which will provide an extremely stable shooting platform in a variety of situations. It’s very well designed and made and is about as ‘bombproof’ as you can get!