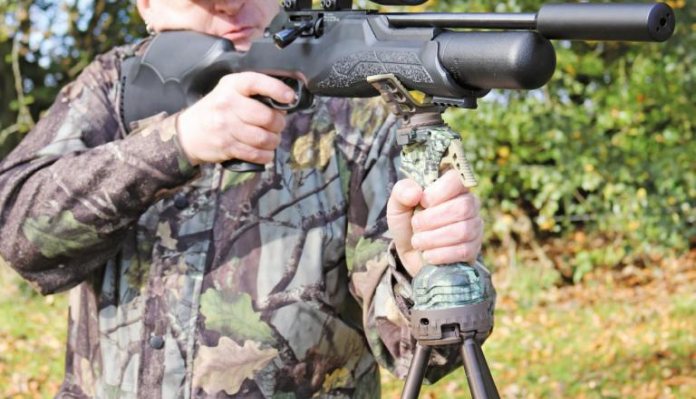 Whenever possible, taking a rested shot is always better than taking an unaided one, especially if the shot is at a tricky angle and/or distance. Shooting sticks have been around for many a moon, first we had basic, cobbled together, homemade jobbies made out of lengths of wood. Then production versions in various height adjustable configurations of monopod, bipod and tripod.

In that respect, the Primos Trigger Sticks Gen3 are a prime example of how far we’ve come with this type of shooting accessory by way of features, versatility and ease of use.

I particularly mention their userfriendly nature, because you can adjust their overall height by using just one hand! This is their USP, because the ergonomic ABS handle with rubberised compound, no-slip rear grip backbone features a trigger lock system. This control is in an ideal position for use while holding the sticks at the head. When this is operated (pulled) all three legs of the sticks are free to move within their individual tubular frames. On releasing the ‘trigger’, the anodised aluminium legs lock up solidly, but the V-yoke head is still able to fully rotate should you need to pan around. They have a height range of 24” – 62” which enables shots to be taken from seated to standing; however, this is also furthered by the legs being able to be set at extreme angles due to what is termed the ‘extreme leg angle lock’, which also enables you to set up quickly on any terrain, from virtually any position.

This versatility is due to the new design locking collar (found directly above the legs) which controls how far they can be splayed out. In the pre-set location, the collar allows them to be spread out far enough to form a rock-solid tripod for a kneeling or standing shot. If you want the sticks to go lower, then the collar needs to be rotated anticlockwise, which allows the lugs at the top of the legs to insert into idents in the collar, resulting in them spreading out at a far greater angle. Also, the length of each one can be altered independently, to create a stable platform to shoot off on the most uneven of surfaces.

The pistol grip of the sticks has been given most modification over previous models, not only due to its superb, contoured, ergonomic feel, but also the inclusion of the locking switch for added security when changing heads. This new, Quick Detach Yoke System with Integrated Lock makes it easier than ever to change the V-yoke for resting a rifles forend over to the dedicated optics adaptor supplied.

This requires disengaging a lever switch on the left of the head, then pressing in the serrated block shape button on the opposite side. This then releases the V-yoke and allows the ‘optics adaptor’ to be fitted, which obviously should already be screwed into the camera or optic/spotting scope of choice. It then locks just as securely in place as the rifle rest to give a very smooth panning action as you rotate and scan.