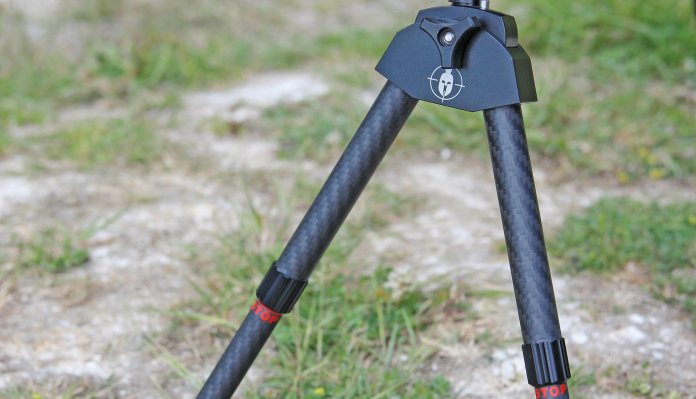 The Javelin Super Lite bipod appeared at the 2014 BSS and is produced by Spartan Precision Equipment headed up by Rob Gearing along with his General Manager Simon Wilkinson. The idea was radical in that the design uses the maximum of carbon fi bre and aluminium alloy to offer a light weight unit that in terms of ability gives nothing away to the ever growing crowd of Harris bipod clones. It’s light at just 133-grams (4.6oz) but also offers swivel and lockable cant facilities along with length adjustable legs with two, integral foot style options (spike and rubber). It connects using magnets in a socket called the rifl e adaptor plate (RAP) that fi ts under the forend. This means it can be quickly fi xed or removed as required, which translates into a lighter/ handier rifl e when you don’t need a pod but a secure base when you do.

Blaser saw the Javelin and contacted Spartan with a view to making them for their R8! In fact when I fi rst met Rob and Simon at Bisley in 2014 they showed me a prototype R8 Professional Success (PS) stock that had an integral RAP socket in the forend. I wanted one for my R8!

Branded as a Blaser product they call it the Carbon Bipod, originally they were going to use the Javelin, but Rob pointed out that from an aesthetic view point the R8 stock does not have one straight line on it and the more angular Javelin would look out of place. He redesigned it and took the opportunity to address the leg gape to a wider angle for more stability. As can be seen the look is different!

Unlike the standard RAPs that can be fi tted to any forend externally by screws the dedicated socket on the R8 PS is internal, making it sleeker and stronger as it’s recessed. The Carbon comes with a dedicated forend cap. Fitting is easy as you remove the barrel, undo the two internal Allan bolts remove the original and fi t the replacement.
The Carbon is taller than the Javelin Super Lite and offers a height adjustment from 9 to 12.5”; the extendable legs require one turn to unlock so they can be slid out. They now incorporate a stop system so they can’t be pulled out as they can on the Javelin! A pin in the magnetic plug gives limited traverse, which is more than enough for most shooting situations. The new forend cap features an integral lug to the rear of the socket cross-drilled for a sling swivel. However, the Uncle Mikes QD swivel pin is too big. Blaser wanted a Euro-sized hole, which is smaller than the US dimension. No big as you can drill it out, or use the original swivel from the forend!

The Carbon really looks the part on the R8 Professional Success; they are currently working on one for the R8 Professional due to its shorter forend cap. The ability to ‘plug & play’ is excellent, as all you do is slide the top lug into the socket, the magnets connect and you’re on. Meaning no extra weight and bulk on the gun until needed, which is a real plus. With swivel and cant, the last offering variable tension and the adjustable legs combining to offer a steady support platform that can cope with any ground or surface situation. In use the wider gape is benefi cial as it adds more stability! I think the Carbon Bipod is going to be a great success for Blaser and also do a lot to push forward the Javelin name too.

When I fi rst spoke to Rob and Simon they said “watch this space” as they have not fi nished yet! While at the BSS they were showing some future developments. There’s a shooting tripod built on the same principle as the Javelin – adjustable legs, steel spike feet with rubber caps for different surfaces etc, with the mounting stud in the top. The rifl e plugs into this via the RAP and offers an incredibly stable base to shoot from. I’m not a fan of sticks as I fi nd them too unsteady, but the Spartan version is something else! No fi rm prices yet but a ball park of £300 is probable.

It’s also possible to remove a leg so you have a twin stick; again very stable and they are working on some form of clamp that would allow it to be attached to high seat rails etc. Also a short rear rifl e support! When collapsed the tripod is no longer than the R8’s stock so should fi t in most bags.

A hanging hook is incorporated underneath the head, which will allow you to gralloch a deer. I found with a pack in place it adds even more stability! There are camera and binocular/spotter adaptor sockets for fi lming and observation. Another neat idea is a universal, fl ush-fi t, RAP socket, which will allow you to convert any rifl es forend. I will be getting one for my Mauser M03 Extreme. I hasten to add all of the above is still in prototype phase, but should be in production soon!

Finally Rob told me that’s it’s not just sporting rifl e manufactures that have shown interest as police and military units are seeing the advantages offered by these new systems and the bipods too. Looks like the boys done good; great to see a British-made and designed product getting the attention it deserves. Watch this space!