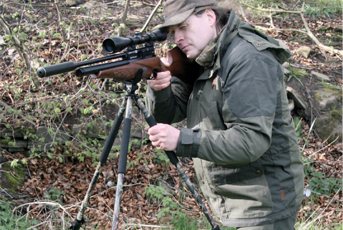 Shooting sticks I’ve tried several but with the air rifl e over my shoulder and carrying them in my other hand they can prove to be more hassle than they’re worth. So when the Seeland Tripod in Erase XT camo and a Bipod in black came my way for test I wasn’t overjoyed, however, decided to rethink how to use them. There are times in summer when crops are high you need more elevation than a standard low bipod can give and anything that helps steady your aim for a telling shot has to be useful.

When closed they measure 29” to the yoke and open a generous 72” so when the legs are opened out they’re high enough for most people. I also mention the closed length because they made handy lofting poles to place a few deeks around a hide this autumn.

When closed they’re held together by a permanently attached Velcro strap that stops them clacking together and infuriatingly as some do when walking a leg decides to go astray, often hitting something giving your presence away. The top sections are also coated with a Neoprene-type material that helps eradicate them knocking together in transit. This is also comfortable to hold when you deploy the sticks for taking a shot.

The bottom of each leg has a rubber foot that can be screwed up to reveal a metal spikes to cater for stability on any type of surface. The wide yoke that supports the forend swivels a full 360° and is ribbed inside to grip. What I particularly liked was the leg extension system, which consists of strong cam lever locks but above the lower leg is a foam ring so adjustment can be done quietly. They’re telescopic and strong but in-between the locks the extensions have a scale from 0 - 18” in 1” increments. This will allow you to set the high precisely on each leg.

You definitely have to adapt to use sticks. One is to sit with them set as you wait in ambush or carry your rifl e under one arm while carrying the sticks already set to a height that suits you for standing, kneeling or seated shots. Without doubt they steady your aim and using air rifl e or rimfi re, I now take them for lamping, NV sessions and the occasional walkabout.

Overall design, strength and ease of use

Good sets of sticks well worth a look