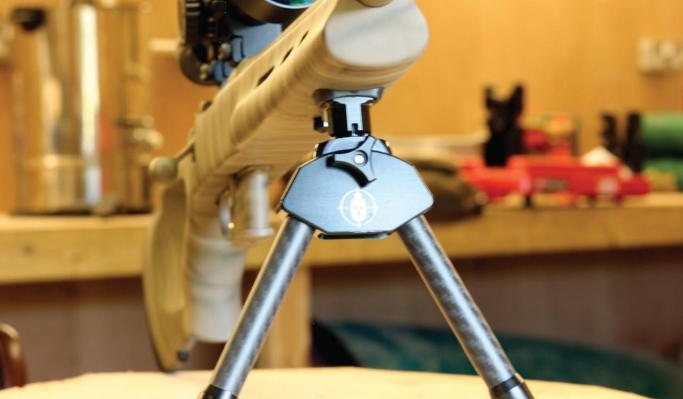 Three years down the line and a lot has changed with the original Javelin Bipod from Spartan Precision Equipment! If you don’t know, the design is probably the lightest pod ever, weighing in at just 149 grams. This is accomplished by maximum use of carbon fibre and aluminium, with the idea to offer a plug-in system that is only on the rifle when required. This is accomplished by a device called the Rifle Adaptor Plate (RAP), which fits to the forend and retains the pod by a patented, magnetic attachment system. Not cheap, nor as stable as my favoured and benchmark Harris BRS, but for the hunter, a practical design and one I have come to appreciate!

The Mk 1 was not without its issues, as the leg gape was not wide enough, which caused stability problems and the original RAPs were a bit small and did not cope well with different forend cross sections. But Spartan was up to the task and soon had a Mk II, with a wider gape to the legs, along with an improved and beefed-up RAP that used a flat base with individually shaped rubber spacers/adaptors to fit any surface. Plus, a flush-fit version (Gunsmith Adaptor) that has to be bonded into the forend and even a Picatinny rail adaptor; great for TAC rifles!

By this time, the Javelin had gone global and Blaser commissioned their version (Blaser Carbon Bipod) for their R8 rifle, and Sauer came on board too. The latter is the subject of this test and called the 300 by Spartan and the FlexPro by Sauer. There are a few design differences from the Javelin, the main ones are how it attaches and deploys. The 300 uses the same RAP system, so making it able for just about any rifle, but the FlexPro was built for Sauer’s new 404. It uses a mounting spigot in the forend tip, much like the VersaPod system, but with a block on the end that the pod plugs into.

Whereas the Javelin is ‘plug & play’, as in you put it on or take it off as required, as it does not fold like a conventional design, which does raise some issues. The most obvious are it is carried separately, so could be lost and it adds time, as it has to be fitted. The 300 addresses these issues with a semipermanent design, as we shall see. Weightwise, there’s no difference, though the 300 uses a simpler hinge connection at the top, as opposed to the Javelin’s wider yoke with one fixed and one folding leg and does not have a cant tensioner that increase or decreases the effort to roll the rifle left and right. Attachment is by a similar magnetic spigot to the Javelin, which can rotate through 90° left/right from the 12 o’clock position. But the 300 also has opposed lugs like a bayonet-type fitting and the RAP is configured to accept these. These are not to keep it in place in use, as the magnet does that, but to lock it in position when stowed. Spartan have been smart here, as all the RAPs they now make are configured for both the original Javelin and the new 300 and also incorporates a QD sling lug, so that you can fit an Uncle Mike’s type QD swivel; smart!

I fitted my CZ527 Custom 6.5 Grendel with the new RAP and selected a curved rubber spacer, which cinched it up against the forend securely. It’s retained by a counter sunk screw that goes through the base of the RAP, and provides the steel for the magnet to attach to. Also, into the forend, which is retained by a small machine nut if it’s synthetic furniture, or a wood screw for timber/ laminate.

Looking at the RAP, you will see two cut-outs at 12 and 6 o’clock and a corresponding lug on the top of the arm assembly. These are used to lock the pod in place when it’s stowed front or back. To mount the 300, ensure the legs are folded and the spigot vertical! Hold the pod with the logos facing forward and the bayonet lugs at 10 and 5 o’clock and push it up into the RAP. You will feel them go in and the magnet engage; now spread the legs and you’re in business. You get traverse and cant, along with the height-adjustable legs (6-9”). There’s no cant tensioner, but the movement is firm and secure.

So far, no real differences from the Javelin.
However, you can now stow the pod back or front and in this position it stays locked to the rifle. Close the legs and rotate them through 90° and swing them up so that the lug engages with the cut-out in the RAP socket. As they come to rest, a button flicks out on the left of the hinge that locks it in place. I’m used to bipods that sit horizontally under the rifle, so the over/ under position of the 300 does look a bit odd! In use I found to better forward (under the barrel) as if reversed it means you can’t rest the forend on a rail or sticks securely.

The 300 is certainly different and though offering the same as the Javelin its ability to stay on the rifle, I think will give it a greater appeal. Plus, if you want to take it off it’s as simple as pulling out a plug! Finally, Spartan has now developed a cant locking lever for the Javelin that replaces the original thumb nut and is easy to use and offers better leverage, which is in this month’s, ½-page Firearms Product section.