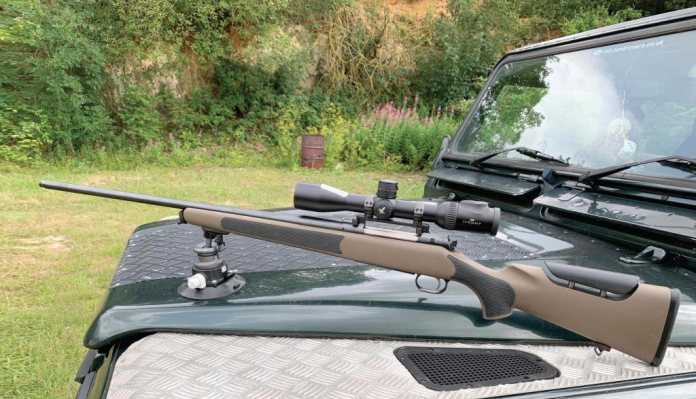 Spartan Precision Engineering headed up by Rob Gearing (Mr G) have come along way in these last five years. From their original carbon fibre, Javelin lightweight bipod, which used a spigot and magnetic QD attachment system, which takes a quantum leap forward and sideways from the norm, they have been building their portfolio. My initial impression was too expensive and too tall and how could it ever replace my beloved Harris BRS pod? Their stand at the 2014 BSS was swamped and I could not get near it and it was not until later at the Phoenix event at Bisley that I finally got to talk to the inestimable Mr G.

Rob is a lateral thinker and bursting with ideas for future products and also a nice guy to nerd out and chat with. I remember saying wouldn’t it be a good idea to get the Javelin to fit my Blaser R8, he smiled and came back with the prototype forend that he eventually sold to Blaser; genius? This collaboration with major manufactures has snowballed and seen a lot of innovative and specialised bipod and other designs born. And this evolution never seems to stop.

Last month, he sent me four new products the Davros (replacement tripod head), Sucker Cup vacuum system, the Mr G Clamp, which is exactly what it is and a new lightweight bipod system with replaceable legs, the Javelin Lite. I’ve been evaluating these over the last month; so, here are my thoughts.

The Davros is essentially a modified version of the head unit of their Sentinel tripod and uses a ball-ended mounting spigot in a 360º socket with locking clamp. The idea is that it acts as a universal coupler for the Sucker and Mr G Clamp and will also interface with other commercial tripods and systems, to allow them to be used for Javelin-adapted rifles and products with mounting socket. A good example is the highly popular Primos Trigger Stick II tripod that has a 3/8” camera adaptor stud that the Davros screws onto. As with the earlier Kapita and later Sentinel systems, the spigot is lockable to provide whatever stability you need.

I like vacuum mounts, as you can quickly and easily position support for your rifle, camera, spotting scope or binos. In the main, I have always picked from camera accessories using the industry standard ¼-3/8” thread system. Spartan use a Wood’s Powr-Grip Model: LJ45AM suction cup. It doesn’t use an over top-dead-centre lever to create the bond, instead a more practical pump that really creates that vacuum fast and hard. It’s rated to hold loads of up to 18 kg, which is more than enough. To remove it, there are two tabs on the edge of the cup, just squeeze them in and it’s off. It comes with a 3/8” threaded stud for the Davros. Fitted to the bonnet of my Landy, I dropped on my Mauser M03 and it gives a superior and solid mount. It can also stick to any flat surface vertical or horizontal. A newer version, I’ve not yet seen is the same base with their Wiener swivel head adaptor.

The G clamp consists of a U-shaped bracket, made from 10 x 38mm flat, high strength, aluminium bar, the locating screw can accommodate items of up to 70mm in width/ depth. The inside top is rubber covered and the nose of the threaded shaft has a plastic socket with a shallow V-notch, so ideal for clamping on round or flat surfaces. This would be particularly useful up a high seat, truck door, cargo bed sides or tail gate. The other end of the shaft shows a round, tensioning wheel with a ¼”/3/8th adaptor, so that you can fit the Davros or other supports/mounts, for example Primos’ 2-Point Gun Rest as that has a 3/8” threaded base. The clamp also shows four more ¼” threaded studs at the end, sides and a 30º angle, using a 3/8” adaptor the Davros can be fitted. These just screw into the thread in its base, so making it ¼” compatible. Adaptors cost about 87p each, or you can buy them in packs.

My beef with the first Javelin was; the legs, even when retracted were too long, which is a bad thing in a bipod. They now produce shorter versions, which I find ideal for my Mauser M03 and Blaser R8 rifles; if I need extra height, they are still length-adjustable. To be honest, 5 - 6” handles the majority of situations.

Keeping with the lightweight, carbon fibre build, we have the Javelin Lite. This offers fixed-length, screw-in legs, in three different options; Long, Standard and Mini. Made of carbon fi bre with the usual removable rubber, multi-surface feet, underneath are tungsten carbide tips for harder surfaces. The build remains the same with a fixed and folding leg for stowage, lockable cant and limited traverse, but everything is scaled down slightly.

However, the Lite is equally capable on any fullbore rifle and maintains the Javelin’s primary principle of you only put it on the rifle when you need it, or plug & play as I say. It’s also considerably cheaper than the standard, telescopic version, to the tune of nearly £80; result. Overall, some good kit that offers a deal of lateral usage on competing products and more innovation for Javelin owners.